This story was co-published with New York Magazine.

The Department of Homeland Security is investigating whether the civil rights of a Long Island teenager were violated when immigration officials used admissions he made to police as an informant to mark him for deportation to a likely death.

Henry’s case came to the attention of investigators earlier this month after ProPublica published his story in partnership with New York Magazine. Henry was 17 when he decided to inform on his gang, MS-13. He thought authorities could help him start a new life. Instead, police turned Henry’s file over to Immigration and Customs Enforcement, which arrested him last August as part of an anti-gang sweep. He was sent to a New Jersey jail with the very MS-13 members he had been informing on.

After the story ran, the Department of Homeland Security’s office of civil rights and civil liberties, which looks into complaints of abuse by ICE, reached out to Henry’s immigration lawyer to ask for his last name, which was withheld in the story to protect the teen’s identity. The office confirmed this week it had opened an investigation into how Henry was treated.

ICE officials put information Henry gave police into an unsealed memo explaining why the agency detained him. Henry says the MS-13 members he remains locked up with have been demanding to see the incriminating memo. ICE said this month it has stopped creating detention memos like Henry’s, in part because they can become public and put detainees’ lives in danger.

Non-citizens have many of the same basic rights as citizens, including the right to due process and equal protection under the law. Henry’s lawyer, Bryan Johnson, said the investigation suggests the Department of Homeland Security is concerned that ICE has become overly aggressive as it pushes to boost arrests.

“They reached out to me on their own — I’ve never seen that before,” Johnson said. “ICE just threw this kid under the bus. What’s the purpose of detaining him when he was assisting in this investigation? And if this is their policy, how many other kids are out there like this?”

An ICE spokesperson declined to comment. If the civil rights office finds wrongdoing, it can recommend policy changes. If ICE does not implement those changes, the office can take the matter up with Department of Homeland Security leaders. In recent years, the office has acted as a watchdog and pressured ICE to improve medical care and meals in detention centers, ensure that detainees have access to their lawyers, and stop the wrongful arrests of people whose deportation orders had been overturned.

The inquiry comes as Henry is fighting to stay in the country. He entered the U.S. legally and was awaiting a final decision on his asylum case when he was arrested. His final hearing was to take place earlier this month, but a judge who seemed receptive to his claim postponed the decision until a second hearing on May 22.

Henry first asked his high school English teacher to help him escape the gang in 2016. She went to school administrators, administrators passed Henry on to the police, and police connected him to the FBI Gang Task Force. His English teacher and school superintendent have now agreed to testify on his behalf. Henry’s FBI Task Force handler and his school resource officer submitted an affidavit, but ICE is objecting to the statement.

In the wake of the story, Henry has also been granted a new bail hearing, set for the day of the asylum decision. The same judge had previously denied his bail request, but is giving Henry another chance in light of new testimony. If the judge approves Henry’s asylum claim and the government appeals, he can still be released on bond.

Henry started the month expecting to be deported to El Salvador, where gang members had told him he would be killed for informing. He credits pressure from readers with saving his life. If he is ordered to leave the U.S., he plans to use $20,000 readers have donated to find refuge in another country. He said that if he is released, he would like to be able to look up at the sky. He has not been allowed yard privileges in New Jersey. He also wants to call his family in El Salvador.

“I’d call my grandmother and tell her I’m okay. Maybe I could study a little, and start making up the year I missed in high school. I’d like to take all this help and start a new life,” he said. 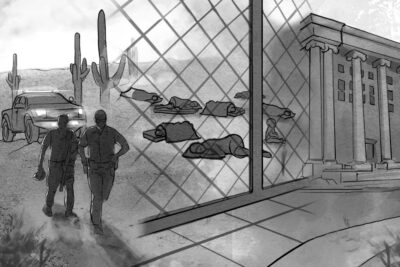 Henry’s case highlights a shift advocates have been warning about since President Donald Trump took office and cast gang violence as a symbol of the dangers of illegal immigration. Trump has frequently talked about gang killings on Long Island, and applauded ICE and the Suffolk County police for stepping up efforts to target young immigrants suspected of MS-13 ties for deportation.

Unlike the FBI’s Long Island Gang Task Force, which does not share information for use in these anti-gang roundups, the police department’s policy is to turn over whatever information immigration enforcement officials request. The New York Civil Liberties Union filed a lawsuit earlier this month to force the department to disclose its written guidelines for sharing information about immigrants.

“I think everyone deserves to know,” said Irma Solis, director for the group’s Suffolk County chapter. “We’ve seen this with a lot of students.”

The Suffolk police told ProPublica that law enforcement agencies are obligated to share information, but the department has implemented a new policy in which it provides ICE with information on police letterhead, as opposed to turning over entire files.

The governor commented separately on Henry’s case. “I don’t know why you would punish a person who was being an informant and was being helpful,” he said.