It has been almost two months since a Los Angeles Police Department patrol car accelerated into Brooke Fortson during a protest over police violence. She still doesn’t know the name of the officer who hit her or whether that person is still policing the city’s streets. The officer did not stop after hitting Fortson and instead turned around, nearly hitting other demonstrators in the process, and sped off.

The LAPD almost surely knows who the officer is. The squad car’s number is clearly visible in one of the multiple videos that captured the incident. But the department hasn’t released any information: not the officer’s name, or whether that person has been disciplined. The police say the incident is still under investigation.

As hundreds of videos of police violence during protests have circulated, ProPublica wanted to see what happened to officers in the aftermath.

We set out to see whether the incidents caught on camera were investigated, whether officers were named and what information we could get about any investigations or discipline. We found a widespread lack of transparency that made it difficult to find out even the most basic details about whether and what sort of investigations were taking place.

ProPublica looked through hundreds of viral videos and focused on those that most clearly show an officer using apparently disproportionate force. We ended up with 68 videos involving more than 40 law enforcement agencies across the country, in both large cities and small towns. 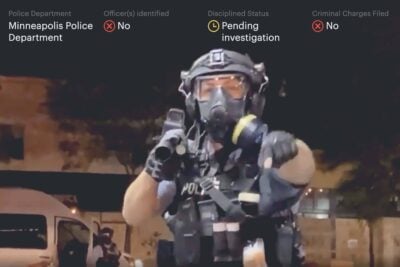 We asked each police department a few simple questions: Who were the officers in the video, were they under investigation and have they been disciplined?

The departments mostly declined to give any specific information.

While officers have the right to use force if their own or others’ lives are in danger, the widespread violence against protesters has been unwarranted, said Chris Burbank, the former chief of the Salt Lake City Police Department.

“When you have a peaceful protest, people sitting on the ground, does that justify the use of tear gas or pepper spray on them? It absolutely does not,” said Burbank, who is now the vice president of law enforcement strategy at the Center for Policing Equity. “I see that as a violation of policy, violation of state and city ordinance and as a violation of common decency and what is good about policing.”

The LAPD told us it has moved 10 unnamed officers to non-field duties while it investigates incidents related to the recent protests. The department declined to say whether the officer who struck Fortson is on that list. Fortson has filed a claim for damages with the city and has retained a lawyer instead of filing a complaint with the Police Department.

Here’s what we learned while looking into these videos:

Officers Remain Anonymous — Even When They’re Caught on Camera

Departments have only named officers in 17 of the cases we examined as of publication. A name can allow the public to learn more about the disciplinary history of an officer and to see any patterns in prior allegations. It also could allow us to see if officers appear in multiple videos involving use of force.

Minneapolis has a public database of officers’ complaint histories. Still, the police department declined to identify the officers in videos we compiled, making it impossible to check their records in the database.

As protests have continued across the country, many states are struggling with how far to go in revealing officers’ disciplinary records.

In June, New Jersey’s attorney general directed the state’s law enforcement agencies to name officers who have been cited for serious disciplinary violations. In his directive, he noted that prematurely naming those accused of misconduct can be unfair if allegations are not ultimately proven. But, he argued, the likelihood of officers misbehaving increases when they “believe they can act with impunity; it decreases when officers know that their misconduct will be subject to public scrutiny and not protected.”

In some states, there are union contracts and laws preventing the disclosure of officer names, said Phil Stinson, a former officer and now a professor at Bowling Green State University. In other instances, though, Stinson said, departments may just be “stonewalling” or trying to get rid of problem officers before things become public.

“They just try to ride it out and hope it quiets down,” Stinson said.

In Florida, Miami-Dade Police Department spokeswoman Sgt. Erin Alfonso at first declined to provide the names of officers from a May 31 incident we examined. The video shows police abruptly arresting a man who was talking to them but not doing anything aggressive before an officer appears to grab him by his shirt. An internal report obtained by ProPublica through a public records request identified the officers as Roberto De la Nuez and Jorge Encinosa. Encinosa declined to comment on the arrest to ProPublica and De la Nuez did not respond to a request for comment. The department’s Professional Compliance Bureau is investigating the case, Alfonso said.

In San Jose, California, anti-bias trainer Derrick Sanderlin was shot in the groin with a rubber bullet after trying to talk to officers with his arms raised.

The incident, which took place May 29 and was reviewed by ProPublica, remains under investigation by the San Jose Police Department. Shivaun Nurre, the Independent Police Auditor for the city, confirmed that her office has received multiple complaints related to the incident. The office does not release the names of officers to complainants. According to a civil rights lawsuit filed by Sanderlin on July 18, three officers fired at him, but as of the initial filing, he had been unable to determine exactly who hit him and he was too far away to have caught badge names. “If someone else who wasn’t a police officer did the same thing, they would be held accountable,” Sanderlin said.

“All allegations, complaints, or concerns of the public will be taken seriously,” the San Jose Police Department said in a statement. The department said all videos provided by ProPublica are “part of an extensive Internal Affairs investigation. As such, this is a personnel investigation and [we] cannot communicate further.”

And in another instance, ProPublica requested the incident report related to a man’s arrest in Kansas City, Missouri. We were told that wouldn’t be possible to obtain because the charges against him and other protesters were dismissed and vacated by a city ordinance, meaning it was “as though it never happened,” a Police Department spokesperson said. The actions of the arresting officer remain under investigation, but without the report ProPublica is unable to obtain the officer’s name or see the rationale for the arrest. “We are not saying we don’t care and it isn’t a big deal,” the spokesperson said.

Investigations — if They Happen at All — Are Far From Transparent

In case after case, departments have cited ongoing investigations for not providing details such as whether officers captured in the videos remain on active duty; they also often can’t say how long the investigations might take. Sometimes, police union contracts prevent police departments from releasing such information.

How long departments legally have to process complaints varies by jurisdiction. In at least 14 states, police officers have a “bills of rights” written into state law that provides special protections during investigations. There’s a one-year statute of limitations in California on police discipline cases. In Florida, investigations of police misconduct must conclude in 180 days. Both states have provisions to pause the clock if there’s a concurrent criminal investigation and California pauses for civil litigation, but otherwise, if a department can’t close out a case in time, officers cannot be disciplined, suspended, demoted or dismissed.

“They have gotten these protections, especially in state laws, through sheer political power and lobbying effort, and that’s a serious problem,” said Samuel Walker, a retired professor of criminal justice who has researched the bills of rights.

Officers Are Unlikely to Be Disciplined — at Least Publicly

Even in cases where victims are able to identify officers, they’re unlikely to see them face discipline.

Because there’s no federal mandate for police agencies to report details about the civilian complaints they receive, the most recent nationwide dataset about how many complaints are fully investigated and “sustained,” meaning the allegations of wrongdoing are confirmed, was published in 1993 by the Bureau of Justice Statistics, according to Carol Archbold, a police accountability expert and professor at North Dakota State University.

In New York City, where 10 of the videos we examined took place, the Civilian Complaint Review Board investigates allegations of excessive force against the police. The board investigated more than 3,000 allegations of misuse of force in 2018, but only 73 of them were substantiated. Los Angeles, which handles its complaints internally unless an officer asks for a review by a citizen Board of Rights, had 5% of complaints from the public sustained that same year.

In California, only investigations that result in sustained findings or those involving deadly force, discharge of a firearm or “great bodily injury” become public.

The picture is similar at smaller departments. Of the 206 citizen allegations against Omaha police officers in 2018, only 17% were sustained by the department’s internal review process. In Indianapolis, where a video from the protests captured officers beating a woman, that number was 7%.

When asked about a video showing officers kicking a protester who was backed up to a fence, the Omaha Police Department said all use of force incidents are being reviewed and that officers from other agencies were assisting. The department declined to comment further and said it is “bound by contractual language that prevents us from disclosing the contents of any personnel matter.”

Hundreds of Complaints Are Overwhelming the Oversight Agencies

Departments now face a mountain of work to sift through the events of the protests. There have been more than 750 complaints filed with New York City’s Civilian Complaint Review Board since protests began in late May, leading to over 200 open investigations. The LAPD has assigned 40 investigators to sift through protest complaints.

The Seattle Office of Police Accountability, an independent oversight body, has been contacted over 18,000 times about police actions at the protests and is aiming to increase transparency.

The agency’s new Demonstration Complaint Dashboard shows 28 ongoing investigations, but the department is continuing to work its way through complaints and plans to continue updating the tracker, said Anne Bettesworth, the deputy director of public affairs for OPA.

It typically takes 180 days for Seattle to investigate civilian allegations against officers, but Bettesworth said the agency is working to complete as many protest-related investigations as possible in under 90 days. It’s an “all hands on deck situation,” she said.

Tell Us About Police Misconduct

We want to hear from police officers, public employees and community members who can help us learn more about police misconduct and why it’s allowed to continue.