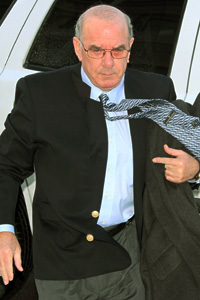 The Kentucky transportation department has awarded $24 million in stimulus contracts to companies associated with a road contractor who is accused of bribing the previous state transportation secretary, according to an audit by the federal Department of Transportation (PDF).

The DOT's internal watchdog used the case to highlight the significant delays in the time it takes for the Federal Highway Administration to suspend or bar someone from receiving government contracts. Though the agency is supposed to make such a decision within 45 days, federal highway officials waited 10 months after the indictment to put the men accused of bribery onto the list of banned contractors.

The combination of lengthy delays in the contractor suspension process and the rapid disbursement of billions of stimulus dollars "creates a 'perfect storm' for contractors intent on defrauding the government," the inspector general audit said.

But the case also highlights a common tension in the contracting world that is now getting more attention with the nearly $800 billion stimulus package: What level of evidence is enough to justify suspending a company from receiving government contracts?

In the Kentucky case, at trial this week, prosecutors have alleged that longtime road contractor Leonard Lawson paid state employees for confidential engineering estimates that helped him get a leg up on bidding for contracts. Lawson's name no longer shows up on state business records for his previous companies, but his son remains an officer or on the board of directors of some of the companies.

The Code of Federal Regulations states that persons and companies are affiliates of each other if one has direct or indirect control over the other. An agency can establish that a relationship is strong enough to justify suspension by showing interlocking management or that a company shares facilities, equipment or employees.

The inspector general's office said DOT could have suspended the companies under federal regulations. But DOT said there wasn't enough evidence that Lawson owned or controlled the companies any more.

In another case, ProPublica reported in October that more than $30 million in stimulus money had gone to defense contractors suspected of abusing a system to help small minority firms win government business. The criminal investigation had been going on for more than a year before the Air Force suspended them in September.

The Air Force ultimately did go after numerous companies that it believed to be tied to a Southern California businessman, even though the companies were listed under different names on official business records.

And in a third case, The Oklahoman newspaper reported last month about a highway contractor who was suspended from state road projects after pleading no contest to conspiring to use unsuitable asphalt material and intimidating a witness. Within months, his son formed a new company at the same address and received $2.7 million in stimulus contracts. The son told the newspaper that his father's case had nothing to do with him and the only connection was that they had the same last name.

Former DOT general counsel Jeff Rosen said there is a constant tension in the federal government between the desire to prevent fraud and the danger of penalizing someone who wasn't at fault.

"You don't want to allow a shell game," he said. "On the other hand, there are legal requirements for what are the affiliates and how much control does one have over another. It really depends on the facts."

In an e-mail, DOT spokesman Bill Adams said, "If an individual who has received a suspension action by the Department of Transportation places another individual in charge of their company, the department would review the situation closely to make sure that the new individual in charge has independent experience, knowledge of the business and that there is no influence or control by the individual under suspension."

He added that there must be no "common financial interest" between the new management and the suspended person. Also, a company could be suspended if the individual's conduct occurred in connection with his duties for the company or with the company's knowledge.

In the Kentucky case, DOT investigators notified the Federal Highway Administration about the indictment in September 2008. The audit does not name the individuals or the companies that received stimulus contracts, but the dates and details match those described in the federal criminal case naming Lawson, his employee Brian Billings and former Kentucky Transportation Secretary Bill Nighbert.

According to the indictment (PDF), Lawson paid $5,000 in cash to one of Nighbert's subordinates on several occasions in exchange for confidential engineering estimates that gave him an advantage in bidding for state road contracts. Prosecutors allege that after Nighbert left office, Lawson hired him on a fake consulting contract, paying him $10,000 a month and providing a vehicle and health insurance.

Nighbert, Lawson and Billings have all pleaded not guilty.

DOT investigators provided the Federal Highway Administration with a draft report that listed several companies associated with the indicted men. The inspector general's office doesn't elaborate in the audit on what it means by "associated." But it said the DOT could have suspended the companies under federal rules.

Nevertheless, the agency chose to suspend only the individuals because, in its view, the available evidence wasn't legally sufficient, Linda J. Washington, DOT assistant secretary for administration, wrote in a memo in response to the report.

The Federal Highway Administration "did not find any evidence that any of the suspended individuals owns or controls companies to which [stimulus] contracts were awarded," Adams said in an e-mail. "If such evidence were presented, FHWA would act expeditiously."

Chuck Knowles, deputy state highway engineer, said Lawson used to own or manage several construction firms that won state road contracts for years. But those firms that have now won stimulus contracts no longer list him as an officer.

"If they had a low bid and they can perform the work, we can't not award it to them," she said. "They're not the ones that have any action against them, the companies themselves."

Calls to the companies were not returned.

At the criminal trial this week, the Louisville Courier-Journal reported, Lawson's attorney said the case was motivated by state transportation officials who had a grudge against Lawson.

Former DOT inspector general Ken Mead said just being under investigation isn't necessarily enough to merit suspending a company from government contracts, as sometimes a competitor will make an allegation that doesn't pan out. At the same time, he said, agencies don't have to award a contract if they suspect wrongdoing.

The cases often come in shades of gray, especially when management changes are involved.

"The sins of the father are not always passed to the son," Mead said. "It depends on who's really pulling the strings."