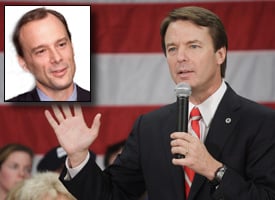 Earlier this month, Raleigh News & Observer Executive Editor John Drescher wrote that when allegations of John Edwards' affair first surfaced last October, Edwards called Drescher and told him off-the-record that the affair hadn't happened. We talked to Drescher about anonymous sources and what journalists should do when off-the-record sources lie.

You spoke with Edwards in October, when the first Enquirer story came, correct?

Your paper had a chilly relationship with Edwards?

We had almost no relationship with Edwards. He became a national player and then just didn't have a need to talk to the News & Observer anymore. I don't think Edwards knew who I was that night, and he probably still doesn't know who I am.

So what exactly happened in that surprise call?

It was a brief talk. You could hear airport sounds in the background. He just said that the allegations weren't true. He started talking about how the News & Observer was important to him as his hometown paper, the one that landed on his doorstep every day. He urged me not to run the story and pointed out how painful it would be to Elizabeth, who was sick. That was the extent of the conversation. It was probably two to three minutes.

Fast forward to Edwards acknowledging he lied. Was it an obvious decision to out him?

I thought it was a clear decision, but I wanted to check myself. So I ran it by a few people here, who thought I should report the conversation. And really, I felt compelled to report it. In my view, the Edwards conversation didn't influence my decisions, but I thought I was obligated to tell our readers that Edwards had called me and lobbied not to run the story.

Is this something you've ever dealt with before?

Do you feel like a rule of thumb can be applied here? If an anonymous source lies to you, can you out them?

I'm just not sure that the situation will duplicate itself. [But] I feel like "off-the-record" is an unwritten contract where the source -- and he's the one who has to go off-the-record -- says, "I have truth I want to tell you, but I have my reasons for not wanting to attach my name to it, so can we go off the record." And I feel like that contract was broken in this case.

Isn't Edwards an easy mark to make such a call on? I mean, Edwards' power is diminished, and frankly if you piss him off at this point, that doesn't cost you a lot.

I was conscious when I was writing that column about hitting a guy when he was down. But the bottom line is if I'm trying to explain our coverage and the principal player in our coverage has called me about the story and given me bad information, I feel like I had an obligation. So I was aware that Edwards is an easy target to pick on. That didn't stop me from picking on him.

I had a journalism professor who raised the issue of whether it was appropriate to reveal my discussion with Edwards. But I haven't had a single working journalist question the decision.