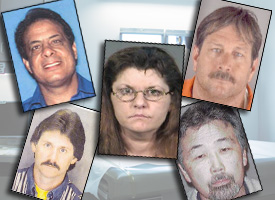 Stung by revelations that dozens of California nurses kept working despite serious and sometimes repeated criminal convictions, the state's Department of Consumer Affairs is moving quickly to ramp up oversight.

ProPublica, in a joint effort with the Los Angeles Times, detailed how the agencies overseeing registered and vocational nursing waited for years to act against nurses convicted of crimes, including attempted murder and sexually molesting patients. Several felons continue to have clear records with the state, even while in prison.

One prominent weakness cited in the investigation was the state's inconsistent use of fingerprinting, a primary tool for performing criminal background checks and alerting regulators when licensees are arrested.

We identified about 195,000 nurses who had never been fingerprinted. The consumer affairs agency subsequently determined that close to a third of the state's 937,100 licensed health professionals had never been screened, including nearly three-quarters of psychiatric technicians and about half of family therapists, social workers and dentists.

As a result, California Consumer Affairs Director Carrie Lopez made several major changes (PDF) in her organization, including:

The state is also reviewing specific professionals with criminal records who were cited in the ProPublica-Times investigation to determine whether disciplinary action needs to be taken against them.