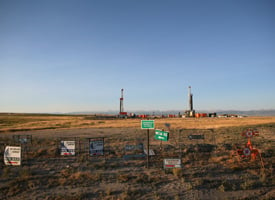 Drill, baby, drill. That clarion call to develop energy here on U.S. soil rallied fervid support in the past year when substantial natural gas deposits were identified from Connecticut to Louisiana -- anything but your typical drilling states.

But it turns out drilling for gas may not be as clean as burning it. And it may come at the expense of another vital resource: water.

Last summer, ProPublica began an investigation into the environmental safety of the drilling boom. That investigation has led to a series of articles, published in the Albany Times Union, Scientific American, BusinessWeek, the Denver Post and the San Diego Union-Tribune. We found that the processes that make all this new drilling possible can -- if not carefully studied and rigorously regulated -- have disastrous effects.

All this gas -- much of which lies as far as 13,000 feet underground in tightly packed sand and rock layers -- has become accessible because of an innovative technology developed by Halliburton called hydraulic fracturing, which shoots vast amounts of fluid underground to break up the rock and release that gas.

“Hydrofracking” uses toxic chemicals -- their identities are protected as business trade secrets -- and can create hazardous waste that needs to be carefully treated or disposed of. The Environmental Protection Agency has declared fracturing safe, and as a result the drilling processes are exempted from many of the federal environmental laws created to safeguard public water -- including the Safe Drinking Water Act.

But ProPublica found that drinking water supplies -- streams and aquifers and even residential wells -- had been contaminated in at least 1,000 cases across the country where there has been intensive drilling. We also discovered that the scientific study done by the EPA was incomplete and based in large part on the input of companies including Halliburton, with which the EPA negotiated before publishing its findings.

Now lawmakers in several states and in Washington are taking an array of actions aimed at tightening industry oversight. In New York state, Gov. David Paterson placed a moratorium on drilling and ordered his environment department to re-examine drilling's impacts and hold public hearings across the state. New York City has become an outspoken opponent to drilling because it could occur within the city's watershed. New York's City Council has held two emergency hearings to discuss the matter.

In Washington, several members of Congress have introduced a bill that would reverse the gas industry's exemptions from environmental protection laws, and subject it to the same federal oversight that other industries face.

In Colorado and New Mexico -- where drilling is most intense and where much of the contamination has been documented -- state officials are rewriting their own laws for the gas drilling industry. They are addressing everything from the secrecy of the chemicals used in fracturing to the laws mandating that waste is properly treated.

Since ProPublica began exploring the costs of gas drilling, the subject has promptedheadlines across the nation, especially as the outgoing Bush administration moved to open up still more lands across the country to drilling before January.

This month, ProPublica extended its series -- now more than 10 articles -- with an examination of how energy developments in the Western United States may affect the Colorado River, the drinking water source for one in 12 Americans and much of Mexico. That story broadened the discussion of the trade-offs of energy development and found that scientists and water managers who depend on the river's water are alarmed by the lack of planning for the river, and that governance of the river is haphazard and inconsistent. Twobills now before Congress would create a central water authority and begin to address these issues.

Decisions on these issues are very much in flux. In 2009, several pieces of federal legislation addressing hydraulic fracturing, water and energy exploration will come up for a vote. The incoming Obama administration will also have to decide how to proceed with dozens of energy exploration projects across the country. Last week, 58 members of Congress wrote (PDF) to the president-elect urging him to reverse many of President Bush's rules and recent decisions regarding gas and oil drilling in the West.

It remains to be seen what the new administration can do legally, or even what form its domestic energy policy will take.