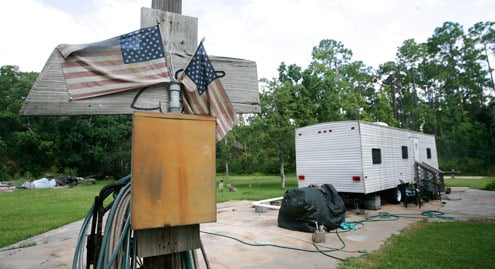 Earlier this year we told the step-by-step story of how the Centers for Disease Control produced a flawed scientific report showing that formaldehyde in trailers provided to Hurricane Katrina victims did not pose a health hazard. We described in detail how the Federal Emergency Management Agency misused the report to ease public concerns about the formaldehyde problem, even though CDC and FEMA officials knew the report was misleading. We also described how Christopher DeRosa, a senior CDC toxicologist, was reassigned after trying to alert top officials to the report’s errors.

Now—two and half months after our investigation—DeRosa is in the midst of ongoing mediation hearings with the CDC to contest his reassignment. He has been advised by his attorneys not to comment on the hearings, but there is still plenty of controversy surrounding the formaldehyde issue that bears mentioning.

For one thing, FEMA is currently spending $28 million a year to store thousands of formaldehyde-contaminated trailers at five different sites in Mississippi. The agency would like to sell the trailers for scrap, but lawsuits filed by hundreds of former trailer occupants has inhibited that effort.

A 2007 report by the Government Accountability Office estimated that by March 2009, maintenance and other expenses on some trailers could have cost taxpayers about $229,000 per trailer, "or about the same as the cost of a five-bedroom, 2,000 square foot home in Jackson, Miss."

Last week we reported another piece of the formaldehyde story. The Sierra Club unearthed documents showing that the Mississippi Emergency Management Agency knew for several months that cottages it provided to Katrina victims contained potentially dangerous levels of the chemical—but MEMA never told the cottage residents.

Mike Womack, MEMA’s executive director, told ProPublica that the agency didn’t reveal the results of the formaldehyde tests it performed in April "because there was and still is no national formaldehyde standard for indoor air quality."

Womack is right. While several federal agencies recommend exposure limits for various settings, none of them specifically apply to the amount that is acceptable in a person’s home.

The closest such standard is enforced by the department of Housing and Urban Development, which monitors the amount of formaldehyde that off-gasses from wood products used in public housing. The HUD standard is set at 400 parts per billion.

Although all the materials used in some FEMA trailers met the HUD standard, the CDC found earlier this year that formaldehyde levels in the trailers still surpassed what the CDC considers safe.

The California Air Resources Board is trying to fill the gap left by the assortment of federal standards. In January, it will begin enforcing one of the nation’s most stringent formaldehyde standards, requiring companies to make sure their plywood emits less than 8 parts per billion and their particleboard less than 18 parts per billion. The limits will be tightened again in 2012.

In March of this year, the Sierra Club petitioned the Environmental Protection Agency to adopt that standard on a national level. Instead, the EPA said it will develop its own standard in coordination with HUD.  Public meetings will begin in January.

Becky Gillette, the Sierra Club activist who first drew attention to high formaldehyde levels in the FEMA trailers in April 2006, is among those who are disappointed that none of EPA’s meetings are scheduled for the Gulf Coast, where so many people have been directly affected by formaldehyde exposure.

Hundreds of Gulf Coast residents are now seeking to file a class-action lawsuit against FEMA and the companies the agency contracted to manufacture the trailers. U.S. District Judge Kurt Englehardt has yet to decide whether to accept the plaintiffs’ request to combine their respective lawsuits into one class-action lawsuit.

FEMA trailer residents are particularly concerned about formaldehyde’s long term impact on their children, who along with the elderly are particularly vulnerable to the harmful effects of the chemical.

As we reported previously, the CDC has yet to begin its long-promised study on the health of the children who lived in the FEMA trailers.

To get the study started the CDC must obtain a database from FEMA that contains the names of occupants and where they lived before the Hurricane struck. With this information, the CDC will try to locate 5,000 children who lived in the trailers and examine how their health may have been affected. Neither FEMA nor any other federal agency has tracked where people moved after they left the trailers.

CDC first requested the data in June, and enrollment in the health study is expected to begin in the spring of next year. According to a PowerPoint presentation obtained by ProPublica, the study will be published in 2015, ten years after people began moving into the trailers.

But last week, CDC spokeswoman Bernadette Burden told ProPublica that FEMA still hasn’t given the CDC the data it needs to begin the study.

"It should be within the coming weeks, but I can’t say if it’s going to be two weeks, eight weeks, or 12 weeks," Burden said.

Earlier this month a study from the Children’s Health Fund, a New York City-based nonprofit, underscored the need for a comprehensive examination of children’s health. The study found that children who lived in the FEMA trailers experienced some of the upper respiratory ailments that are sometimes related to formaldehyde exposure. But the review was small—just 261 children were included—and it looked only at the clinic's own patients, who had come to the clinic with various health problems.