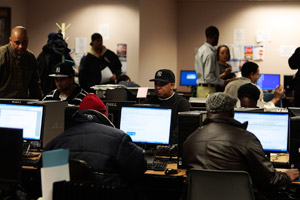 When the White House unveiled its nearly $800 billion stimulus package last year, it promised not only to create and save 3.5 million jobs but also to open the books and prove it. But counting jobs turned out to be a lot harder than lining up a work crew and tapping hardhats.

Now, the White House says it will no longer keep a cumulative tally of jobs created and saved by the stimulus. Instead, it will post only a count of jobs for each quarter.

And instead of counting only created and saved jobs, it will count any person who works on a project funded with stimulus money -- even if that person was never in danger of losing his or her job.

The new rules came out last month in a little-noticed memo (PDF) sent to federal agencies by Peter Orszag, director of the Office of Management and Budget. OMB said it changed the guidelines to prevent the kinds of errors and confusion that occurred when the first job counts came out in October.

But Rep. Darrell Issa of California, the top Republican on the House Oversight and Government Reform Committee, said the Obama administration is making the job numbers even more misleading and is trying to pump them up by counting jobs that weren't created or retained. He outlined his concerns in a letter (PDF) Friday to the government's stimulus watchdog, Earl Devaney.

"I think 'jobs created or saved' has simply lost all its credibility," Issa said in an interview. "It was opportunistic accounting from Day One."

Under the stimulus package, nearly anyone receiving a contract, grant or loan is required to file a report each quarter detailing how the stimulus money was used and how many people were put to work. Those reports are then posted on the government's stimulus Web site, Recovery.gov.

With tens of thousands of recipients now scrambling to meet the Jan. 15 deadline for the next report, the new guidance could significantly change what the public sees. Some examples:

OMB spokesman Tom Gavin said the administration tried something it had not tried before when it promised to count jobs, and the new guidance is an attempt to iron out some of the kinks.

"Many of those people who are being critical now of the revised approach are the same people who complained in October that the system was too complicated," he said. "Whether it's a cumulative look or a quarterly look, it will still provide an unparalleled level of detail about what's happening on the local level thanks to the Recovery Act."

Controversial From the Start

When the first stimulus reports came out in October, the White House faced a fusillade of criticism about the accuracy of its jobs count (640,329, to be precise). Journalists found recipients who overcounted and recipients who undercounted. The government's stimulus watchdog said the data was "riddled with inaccuracies." A top Democrat called the mistakes "ludicrous." And at a congressional hearing, Issa trotted out the Oxford English Dictionary definition of "propaganda."

To address these concerns, the new OMB guidance attempts to simplify rules that were leading recipients of stimulus money to interpret the jobs formula in multiple ways.

The formula is essentially division -- the number of work hours spent on stimulus projects over the number of hours in a typical full-time schedule.

One would expect a contractor engineering a bridge to be able to do long division. But the reality turned out to be a lot more complicated.

First, recipients had to make a subjective decision: Without stimulus money, would this worker have a job? Even if the worker had a job, is there more work because of the stimulus -- for example, an actor in a play that can now run for three weeks instead of two?

The new guidance even provided a series of examples reminiscent of high school math problems: If J. Adams worked 520 hours in the quarter and T. Jefferson worked 260 hours, how many equivalent jobs were created or retained?

Part of the problem is that there's no accepted standard for counting jobs, said Mary Foelster of the American Institute of Certified Public Accountants.

"It's not so much calculating jobs; it's trying to have evidence that a job was retained," she said. "What is the client going to point to to say, 'I was going to lay someone off, but now I'm not?'"

Not Your Grandfather's Job Count

Counting jobs in the New Deal was a lot easier, said Harvard University labor economist Lawrence Katz. The Works Progress Administration was a brand new program, the government paid the workers directly and there was little doubt that the work wouldn't have been done without government money.

President Richard Nixon's jobs program in 1973 was more difficult to quantify, he said, because it distributed money to local governments and nonprofits to hire workers, and some critics say some of those workers would have been hired anyway.

The numbers are inherently inaccurate, he said, because we'll never know how many jobs would have been created or lost without the stimulus. To do so, we'd need a control group, say giving stimulus money to North Carolina but withholding it from South Carolina.

"Obviously, that's not something we can do," Katz said. "We've only got one draw of history."

A more accurate way to account for the effect of the stimulus is to look at the unemployment numbers put out by the Bureau of Labor Statistics or by some sort of model like the White House Council of Economic Advisers uses, he said.

Labor reported Friday that the economy continued to lose jobs in December, for a total of 2.7 million since the stimulus was passed in February. The White House council says that number would be 600,000 to 1.5 million higher without the stimulus.

Despite Obama's promise to track "every dime," it was never feasible for the administration to count every job attributed to stimulus money. More than $450 billion is being spent on things like tax rebates, food stamps, unemployment checks, Social Security and health insurance. Economists say all of those eventually lead to jobs as families spend more at the grocery store, the health clinic or the shopping mall. But it's nearly impossible to do a head count of those jobs.

The cumulative jobs tally posted on Recovery.gov dealt only with money going out in a contract, grant and loan -- about a third of the stimulus package.

Theoretically, if every recipient followed the new guidelines, analysts might be able to use the jobs-per-quarter figures to come up with a cumulative total at the end of next year. But because the new and old numbers are counted differently, they would have to throw out any jobs that were created or saved from February through September 2009.

And neither the White House nor the board that runs Recovery.gov has any plan to produce a cumulative number.