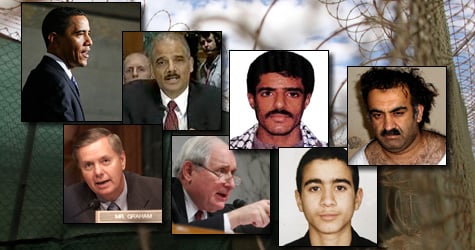 The Obama administration, fearing a battle with Congress that could stall plans to close Guantanamo, is drafting an executive order that would reassert presidential authority to incarcerate suspected terrorists indefinitely, according to three senior government officials with knowledge of White House deliberations.

Such an order would embrace claims by former President George W. Bush that certain people can be detained without trial for long periods under the laws of war. Obama advisers are concerned that bypassing Congress could place the president on weaker footing before the courts and anger key supporters, the officials said.

After months of internal debate over how to close the U.S. military prison at Guantanamo Bay, Cuba, White House officials are growing increasingly worried that reaching quick agreement with Congress on a new detention system may prove impossible. Several officials said there is concern in the White House that the administration may not be able to close the facility by the president's January 2010 deadline.

White House spokesman Ben LaBolt did not directly respond to questions about an executive order but said the administration would address the cases of Guantanamo detainees in a manner "consistent with the national security interests of the United States and the interests of justice."

One administration official suggested the White House was already trying to build support for an executive order.

"Civil liberties groups have encouraged the administration, that if a prolonged detention system were to be sought, to do it through executive order," the official said. Such an order can be rescinded and would not block later efforts to write legislation, but civil liberties groups generally oppose long-term detention, arguing that detainees should either be prosecuted or released.

The Justice Department has declined comment on the prospects for a long-term detention system while internal reviews of Guantanamo detainees are underway. The reviews are expected to be completed by July 21.

In a May speech, President Obama broached the need for a system of long-term detention and suggested that it would include congressional and judicial oversight. "We must recognize that these detention policies cannot be unbounded. They can't be based simply on what I or the Executive Branch decide alone," the president said.

Some of Obama's top legal advisers, along with a handful of influential Republican and Democratic lawmakers, have pushed for the creation of a "national security court" to supervise the incarceration of detainees deemed too dangerous to release but who cannot be charged or tried.

But the three senior government officials said the White House has turned away from that option, at least for now, because legislation establishing a special court would be both difficult to pass and likely to fracture Obama's own party. These officials, as well as others interviewed for this story, spoke on the condition of anonymity because they were not authorized to speak publicly about internal deliberations. 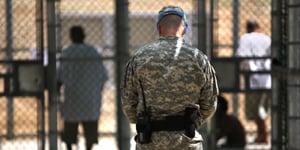 On the day Obama took office, 242 men were imprisoned at Guantanamo. In his May speech, the president outlined five strategies the administration would use to deal with them: criminal trials, revamped military tribunals, transfers to other countries, releases and continued detention. (Read our sidebar: "Review of Gitmo Detainees Has Been Slow and Complex.")

Since the inauguration, 11 detainees have been released or transferred, one prisoner committed suicide and one was moved to New York to face terrorism charges in federal court.

Administration officials said the cases of about half of the remaining 229 detainees have been reviewed for prosecution or release. Two officials involved in a Justice Department review of possible prosecutions said the administration is strongly considering criminal charges in federal court for Khaled Sheik Mohammed and three other detainees accused of involvement in the Sept. 11, 2001, attacks on the United States.

The other half, the officials said, present the greatest difficulty because these detainees cannot be prosecuted either in federal court or military commissions. In many cases, the evidence against them is classified, has been provided by foreign intelligence services, or has been tainted by the Bush administration's use of harsh interrogation techniques.

Attorney General Eric Holder agreed with an assessment offered during congressional testimony this month that fewer than 25 percent of the detainees would be charged in criminal courts and that 50 others have been approved for transfer or release. One official said the administration is still hoping that as many as 70 Yemeni citizens will be moved, in stages, into a rehabilitation program in Saudi Arabia.

Three months into the Justice Department's reviews, several officials involved said they have found themselves agreeing with conclusions reached years earlier by the Bush administration: As many as 90 detainees can not be charged or released.

The White House has spent months meeting with key congressional leaders in the hopes of reaching agreement on long-term detention, even as public support for such a plan has wavered as lawmakers have sought to prevent detainees from being transferred to their home states.

Lawyers for the administration are now in negotiations with Sens. Carl Levin, D-Mich., and Lindsey Graham, R-S.C., over separate legislation that would revamp military commissions. A senior Republican staff member said that senators have yet to see "a comprehensive, detailed policy" on long-term detention from the administration.

"They can do it without congressional backing, but I think there would be very strong concerns," the staff member said, adding that "Congress could cut off funding" for any detention system established in the United States.

Concerns are growing among Obama's advisers that Congress may try to assert too much control over the process. Earlier this week, Obama signed an appropriations bill that forces the administration to report to Congress before moving any detainee out of Guantanamo and prevents the White House from using available funds to move detainees onto U.S. soil.

"Legislation could kill Obama's plans," said one government official involved. The official said an executive order could be the best option for the president at this juncture.

Under one White House draft that was being discussed earlier this month, according to administration officials, detainees would be imprisoned at a military facility on U.S. soil, but their ongoing detention would be subject to annual presidential review. U.S. citizens would not be held in the system. (Last month, ProPublica explored the key issues around preventive detention.)

Such detainees -- those at Guantanamo and those who may be captured in the future -- would also have the right to legal representation during confinement and access to some of the information that is being used to keep them behind bars. Anyone detained under this order would have a right to challenge his detention before a judge.

Officials argue that the plan would give detainees more rights and allow them a better chance to one day end their indefinite incarceration than they have now at Guantanamo.

But some senior Democrats see long-term detention as tantamount to reestablishing the Guantanamo system on U.S. soil. "I think this could be a very big mistake, because of how such a system could be perceived throughout the world," Sen. Russ Feingold, D-Wis., told Holder.

One administration official said future transfers to the United States for long-term detention would be rare. Al-Qaida operatives captured on the battlefield, which the official defined as Iraq, Afghanistan, Pakistan and possibly the Horn of Africa, would be held in battlefield facilities. Suspects captured elsewhere in the world could be transferred to the United States for federal prosecution, turned over to local authorities, or returned to their home country.

"Going forward, unless it's an extraordinary case, you will not see new transfers to the U.S. for indefinite detention," the official said.

Instituting long-term detention through an executive order would leave Obama vulnerable to charges that he is willing to forsake the legislative branch of government, as his predecessor often did. Bush's detention policies suffered successive defeats in the courts in part because they lacked congressional approval and tried to exclude judicial oversight.

"There is no statute prohibiting the president from doing this through executive order and so far courts have not ruled in ways that would bar him from doing so," said Matthew Waxman, who worked on detainee issues at the Defense Department during Bush's first term. But Waxman, who waged an internal battle inside the Bush administration for more congressional cooperation, said the "courts are more likely to defer to the president and legislative branch when they speak with one voice on these issues." 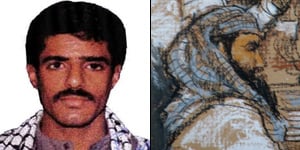 Walid bin Attash, who is accused of involvement in the bombing of the USS Cole in 2000 and who was held at a secret CIA prison, could be among those subject to long-term detention, according to one senior official.

Little information on bin Attash's case has been made public, but officials who have reviewed his file said the Justice Department has concluded that none of the three witnesses against him can be brought to testify in court. One witness, who was jailed in Yemen, escaped several years ago. A second witness remains incarcerated, but the government of Yemen will not allow him to testify.

Administration officials believe that testimony from the only witness in U.S. custody, Abd al-Rahim al-Nashiri, may be inadmissible because he was subjected to harsh interrogation while in CIA custody.

"These issues haven't morphed simply because the administration changed," said Juan Zarate, who served as Bush's deputy national security adviser for counterterrorism and is now at the Center for Strategic and International Studies in Washington.

"The challenge for the new administration is how to solve these legal question of preventive detention in a way that is consistent with the Constitution, legitimate in the eyes of the world and doesn't create security loopholes that causes Congress to worry," Zarate said.