On Friday, in response to a judge’s order, the Department of Justice released data showing the authors, recipients, timing, and subject lines of a group of emails sent to and from the Presidential Advisory Commission on Election Integrity. They show that in the weeks before the commission issued a controversial letter requesting sweeping voter data from the states, co-chair Kris Kobach and the commission’s staff sought the input of Hans von Spakovsky and J. Christian Adams on “present and future” state data collection, and attached a draft of the letter for their review — at a moment when neither had yet been named to the commission.

The commission’s letter requesting that data has been by far its most significant action since its formation in May — and was widely considered a fiasco. It sparked bipartisan criticism and multiple lawsuits. Yesterday, a state court blocked the state of Texas from handing over its data due to privacy concerns.

The involvement by Adams and von Spakovsky, both Republicans, in drafting the letter even before they were nominated to the commission shows their influence. Von Spakovsky previously raised eyebrows after documents from February showed him lobbying against the inclusion of Democrats on the commission.

The sway of Adams and von Spakovsky starkly contrasts with that of other members, who say they have largely been sidelined. A Democratic commissioner, Matt Dunlap, the secretary of state of Maine, expressed frustration with what he said was a “clear” imbalance of power. “Von Spakovsky has a profound influence on this commission,” he said. “I never expected to be at the head of the table, but I’m not even sure I’m sitting at the table.” Dunlap questioned “who the chair of the commission really is. Is it the vice president of the United States, [Mike Pence is the titular co-chair of the commission], or is it Hans von Spakovsky, working in the shadows?”

The letter was sent to states on June 28, hours after the conclusion of the commission’s first conference call with Kobach and Pence. Kobach used the call to inform commissioners of his intention to send the letter. But he said nothing that suggested it had already been written, according to Dunlap, nor did he mention the involvement of Adams or von Spakovsky.

The content of the letter was discussed only in generalities, Dunlap asserted. Commissioners expressed concerns that they hadn’t seen the actual text, he said, but Kobach assured them that only his signature would be on the missive. Dunlap said he then received a copy of the letter shortly after the call, which surprised him.

Von Spakovsky and Adams were not appointed to the voting commission until June 29 and July 10, respectively. Both appointments caused immediate criticism among voting rights advocates. The two men are known for their belief that voter fraud is rampant, and both have a history of advocating laws that critics say would restrict access to voting. Von Spakovsky headed the Heritage Foundation’s election initiatives, and worked for the Justice Department during the administration of George W. Bush. While there, he helped spearhead ultimately unsuccessful efforts to uncover voter fraud and was criticized for writing an article warning of the dangers of voter fraud under a pseudonym.

Adams also joined the Justice Department during the Bush administration. He resigned in 2010 and accused the department of being unwilling to bring cases on behalf of white voters. He now runs the Public Interest Legal Foundation, which regularly sues counties to force them to purge voter rolls of inactive registrations.

The email data that revealed the roles of Adams and von Spakovsky was released as a result of a lawsuit against the Commission by the Campaign Legal Center. The Department of Justice had contended that the emails — which were circulated between Kobach, von Spakovsky, commission staffer Andrew Kossack and the Office of the Vice President’s counsel — are confidential because they contained communications between commissioners.

That stance puzzled Justin Levitt, a professor at Loyola University School of Law and former Department of Justice civil rights official. “At the time, they were private individuals, not members of the commission,” he said. “This is not how you run a legitimate commission that is attempting to, through a neutral process, get information to inform deliberations.”

Neither the White House, Kobach nor von Spakovsky responded to a request for comment. Adams declined to respond to questions asked by email. “You’ve had a hard time reporting accurately, and thus I have nothing for you,” he wrote.

So far, nearly 20 states have submitted at least some data sought by the commission. It remains unclear how many of the remaining states will ultimately comply with the request. Multiple state elections officials responded to the letter with questions of their own, which have been met with silence. For example, John Merrill, the secretary of state for Alabama, asked the commission specifically how the data would be used. Kobach has provided no response so far, according to Merrill. Kobach also did not answer the same question when it was posed to him by members of the press at commission meetings in July and September. 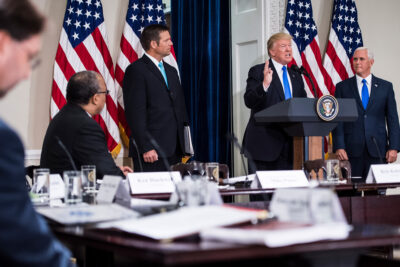 Instructions have been lacking, says one commissioner — a sharp contrast with similar groups in the past.

The commission told ProPublica that states’ voter rolls will be run against federal databases to find potential fraudulent registrations — a move experts say will result in thousands of errors and could distort fraud.

In a July interview, Marc Lotter, then the spokesperson for the Pence, said that the commission planned to check the rolls against “a number of different databases,” but did not specify which databases or how this match would be done. The email data offers clues to both, though the filing contains only data and not the text of the emails.

First, it shows the commission has received proposals from “third party data analysis entities,” though no further details are offered. It also reveals that the commission has been in contact regarding “potential future coordination” with the Department of Homeland Security, which maintains data on people moving through the immigration process. Emails regarding data sent to the Social Security Administration, which maintains records on deceased individuals, are also listed. Kobach has previously expressed interest in obtaining information on immigrants and dead people who are still registered.

This is not the first time von Spakovsky’s actions prior to his appointment have caught the attention of critics. Last month, the Campaign Legal Center released a letter received from a public records request that showed von Spakovsky had sent a February email that was forwarded to Attorney General Jeff Sessions. In it, von Spakovsky lobbied for specific members (whose names were redacted) and lamented the inclusion of Democrats on the commission. “There isn’t a single Democratic official that will do anything other than obstruct any investigation of voter fraud and issue constant public announcements criticizing the commission and what it is doing, making claims that it is engaged in voter suppression,” he wrote. (In the most recent batch of email traffic, there are further messages from von Spakovsky and Adams, before they joined the commission, in which they appear to be opining on who else should be permitted to join it.)

At the commission’s September meeting, Kobach said he was unaware of anyone expressing these sentiments directly to him, and that he would “laugh” at the idea that Democrats shouldn’t be included because federal law requires bipartisan participation on such commissions. “So whoever authored that email obviously wasn’t acquainted with the law,” he said.

Correction, Oct. 6, 2017: The court that blocked Texas’s release of voter data was a state court, not a federal court as we originally reported. In addition, we originally identified the plaintiff in the lawsuit that resulted in the release of email metadata as the Campaign Legal Center. It is the Lawyers Committee for Civil Rights Under Law.