Under the alias Cynthia Murphy, Russian spy Lydia Guryeva attended Columbia Business School, and ingratiated herself with a key fundraiser for Hillary Clinton’s 2008 presidential campaign. Guryeva’s instructions from Moscow, according to a 2010 FBI complaint, were to “strengthen…ties w. classmates on daily basis incl. professors who can help in job search and who will have (or already have) access to secret info” and to report “on their detailed personal data and character traits w. preliminary conclusions about their potential (vulnerability) to be recruited by Service.”

Now another graduate student at an urban East Coast university, who similarly cultivated powerbrokers and political operatives, is accused of being a Russian spy and taking orders from high-ranking officials in her homeland. Maria Butina, who received a master’s degree in international relations this past spring from American University in Washington, D.C., courted the National Rifle Association’s top guns and sought access to Republican presidential candidates Scott Walker and Donald Trump. She pleaded innocent last week to charges of conspiring to act as a foreign agent.

If the charges against Butina are accurate, she’s only the latest in a long line of Russian agents to infiltrate U.S. universities. Dating back to the Soviet era, Russian spies have sought to take advantage of academia's lax security, collaborative, global culture, and revolving door with government. Russian intelligence understands that today’s professor of international relations may be tomorrow’s assistant secretary of state, and vice versa. Although cyber-spying and hacking offer opportunities to glean secrets at less personal risk, the traditional strategies of human espionage persist, and sending a spy to school is prominent among them.

In that respect, little has changed since 1938, when Semyon Markovich Semyonov became the first Soviet agent to enroll at Massachusetts Institute of Technology, and made contacts vital to stealing scientific secrets. Or since 1958, when KGB officer Oleg Kalugin entered Columbia’s journalism school. After graduation, posing as a Radio Moscow correspondent at the United Nations, Kalugin attended events at Columbia and reported back on them to Moscow. His report on a speech about U.S.-Soviet relations by Zbigniew Brzezinski, then a Columbia professor and later national security adviser to President Jimmy Carter, earned kudos from the Communist Party’s Central Committee.

After that, “I went all across the country, from Harvard to Columbia and the West Coast, listening to what people said and reporting it if I thought it was interesting,” Kalugin told me. He rose to head the KGB’s foreign counterintelligence branch before falling out of favor in Russia, moving to Washington, D.C., and becoming an American citizen.

Sometimes, Russian agents join the academic community as students or instructors. Of Guryeva and the other nine “illegals” — sleeper agents without diplomatic cover — who pleaded guilty in 2010 to conspiring to act as foreign agents and were swapped back to Russia, seven went to U.S. universities, including Harvard, The New School, and the University of Washington. One taught politics for a semester at Baruch College, lambasting American foreign policy.

In other cases, agents hold diplomatic posts at an embassy or consulate and forage in nearby campuses for recruits and information. It’s easier, cheaper and less conspicuous for Russian intelligence to enlist a student or professor who can be steered to a federal agency than to lure someone already in a sensitive government position. Exploiting open campuses, spies slip unnoticed into lectures, seminars and cafeterias, where they befriend the computer scientist or Pentagon adviser sitting beside them.

Butina enrolled in American University’s School of International Service in the summer of 2016, university spokesman Mark Story said. She concentrated in cyber policy and became a research assistant at the university’s Kogod School of Business. With research funding from the Kogod Cybersecurity Governance Center, she and two professors, Mark A. Clark and J. Alberto Espinosa, co-authored a March 2018 paper on “Cybersecurity Knowledge Networks.” (The paper is still on the center’s website.) Clark and Espinosa declined comment.

The cybersecurity center was founded in 2015 to provide “guidance specifically to boards of directors, senior executives, and other leaders so that they can make informed decisions about cybersecurity.” It has a partnership with defense contractor Raytheon Co., and was headed from June 2017 to March 2018 by a former lawyer for the National Security Agency.

University spokesman Story declined to say whether Butina’s involvement with the center raises any concerns, or if the university plans to review her activities. He added that the center doesn’t do classified work and has no contracts with intelligence agencies.

Raytheon spokesman Michael Doble said, “There is no connection between our support of this respected school and what one of its students may or may not have done.”

Butina participated in February 2017 in a “weekend of seminars and cultural immersion” in Gettysburg, Pennsylvania, which brought together 10 American University students from Russia, Ukraine, Belarus and Azerbaijan with a dozen students from Gettysburg College to discuss U.S.-Russian relations in the post-Soviet era. Susan Eisenhower — a frequent adviser to businesses and the U.S. Department of Energy, and an expert on foreign policy and national security issues —led the seminars as well as a tour of the Gettysburg home of her grandfather, President Dwight Eisenhower.

Eisenhower said she wasn’t involved in selecting the American University students. She told me that when the delegation arrived, “I thought it was odd because she [Butina] was a graduate student and the other students were undergraduates. She played a prominent role in the discussions.”

Eisenhower added, “Any group of foreign students could possibly include students who have been called upon by their intelligence service. But we can’t isolate ourselves in a globalized world, and these exchanges play a role in enhancing mutual understanding.”

After the sessions, Butina wrote to Eisenhower, mentioning people they knew in common. Eisenhower answered politely, but was determined to avoid a continuing relationship, she said.

Prosecutors contend that a 56-year-old American — unidentified in court documents, but reportedly a South Dakota businessman and political fundraiser — edited Butina’s papers and answered exam questions for her. “Although she attended classes and completed coursework with outside help, attending American University was Butina’s cover,” the U.S. attorney’s office in Washington, D.C., said in a legal filing. Story declined comment on the cheating allegations, but noted that, under university policy, it reserves the right to revoke academic credentials acquired through “deceit, fraud, or misrepresentation.”

Beyond the university, Butina wooed gun-rights activists and influential conservatives. Shortly after Clinton called Trump to concede defeat on the morning of Nov. 9, 2016, Butina sent a direct Twitter message to a Russian official: “I am ready for further orders.”

As the use of Twitter suggests, one of the puzzling aspects of this case is the seemingly slapdash tradecraft compared to Russian intelligence’s usual standards. By contrast, Guryeva funneled names of potential Columbia recruits to Moscow Center via radiograms or electronic messages concealed by special software. Butina’s lawyer has said she simply takes an interest in American politics and is not a Russian agent.

In an interview for my 2017 book, “Spy Schools,” a professor at one top-tier East Coast university described how Russian intelligence tried to recruit him. After he moderated a campus discussion on arms control, a Russian diplomat approached him and invited him to lunch. Suspicious, the professor checked with the FBI, which confirmed that the diplomat was a Russian agent and advised playing along. The bureau wanted to use the professor as a double agent to learn about “Russian collection priorities, tradecraft, and things like that,” he told me. “Just knowing what the other side is really interested in is very valuable.”

Over the next two years, the Russian and the FBI each treated the professor to 10 lunches. He would dine with the Russian spy at Mexican restaurants, French bistros and steakhouses — never the same place twice, because his host was worried about counter-surveillance. The Russian always paid cash: $100 bills. Afterward, the professor would call the FBI agents, who would take him to lunch a few days later and debrief him.

The spy plied the professor with gifts of increasing value: first a fine bottle of Posolskaya vodka, then an $800 Victorinox Swiss Army watch, and finally, in return for an essay about the Afghanistan war, $2,000 in $100 bills. The authoritative-sounding essay didn’t enthrall Russian intelligence. “We appreciate it, but we didn’t think it was that sensitive,” the spy told the professor, who had followed the FBI’s instructions not to divulge any secrets. “We can pay you more if you give us more.”

The agent also encouraged the professor to seek a job in the State Department or Pentagon—where, both men understood without saying, Russia would pay dearly for an inside source. After the spy rotated back to Moscow, the relationship — and the professor’s moonlighting in espionage — ended. 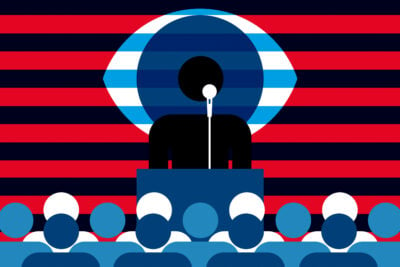 In 2013, the FBI recorded two Russian spies under diplomatic cover, Igor Sporyshev and Victor Pobodnyy, discussing efforts to recruit several young women with ties to New York University. Both men specialized in economic espionage and were supposed to gather information on U.S. alternative energy initiatives, as well as on sanctions against Russia. That same year, in a classic example of how spies mine conferences for prospects, Pobodnyy—using his cover as a diplomatic attache—met Carter Page at an energy symposium in New York. Pobodnyy then received documents about the energy business from Page, later a Trump campaign foreign policy adviser whose communications were monitored by the FBI as part of an investigation into links between the campaign and Russia. In July 2016, Page gave a speech at the New Economic School, a Moscow university, exchanging “nice pleasantries” afterwards with Russia’s deputy prime minister.

Page has denied any wrongdoing, saying, “I had a very brief hello to a couple of people. That was it.” The nexus between espionage and academia has surfaced elsewhere in the Trump-Russia imbroglio. One incident involved a professor in the United Kingdom — hardly a surprise, since Russian intelligence has long been notorious for recruiting communist sympathizers from British universities, including Kim Philby and the other “Cambridge Five.”

Joseph Mifsud has been a professor at the University of East Anglia and the University of Stirling in Scotland (which touted his meeting with Russian president and ex-intelligence officer Vladimir Putin), as well as honorary director of the London Academy of Diplomacy. In 2016, he told George Papadopoulos, a foreign policy adviser to the Trump campaign, that the Russians had “dirt” on then-candidate Hillary Clinton in the form of “thousands of emails,” according to court documents and media reports. Papadopoulos, who pleaded guilty in October 2017 to lying to federal agents, understood that Mifsud had “substantial connections to Russian government officials,” and had met with them immediately before telling him about the Clinton emails, legal filings show.

Mifsud has denied being a Russian agent. “I am an academic, I do not even speak Russian,” he told The Washington Post.

U.S. universities, ever-sensitive to their finances and global relationships, have largely ignored the threat of foreign espionage: They’re ramping up enrollment of full-paying international students as well as opening campuses abroad, which are often subsidized by the host countries. Columbia didn’t revoke Murphy’s diploma after she turned out to be a spy named Guryeva — though Harvard’s John F. Kennedy School of Government did rescind the degree of another “illegal,” Andrey Bezrukov, who had posed as a Canadian named Donald Heathfield. Story declined to say whether, if Butina is convicted, the university will take away her degree.

Annie Waldman contributed to this story.

Parts of this article were adapted from “Spy Schools: How the CIA, FBI, and Foreign Intelligence Secretly Exploit America’s Universities” (Holt, 2017), by Daniel Golden.