When the CEOs of Monsanto and Bayer met now-President Donald Trump earlier this month, eager for a nod of assent for their controversial merger into an agrochemical and seed giant, they promised jobs and investment.

Sure enough, a week later, the companies and a Trump spokesman announced that the combined company would create several thousand new U.S. jobs. Trump himself Twitter-touted the companies’ pledge.

But as Trump talked with the CEOs from his perch on Fifth Avenue, antitrust experts shook their heads.

By meeting with the CEOs of Monsanto and Bayer as well as the head of AT&T, which is trying to merge with Time Warner, Trump has violated decades of White House practice by injecting himself directly into mergers awaiting Justice Department review.

“The public should be concerned that the career attorneys’ and economists’ analysis of the deals is not what the decision is going to be made on,” said Holt Lackey, a former antitrust counsel to the Republican-led House Judiciary Committee.

Several former Justice Department antitrust officials said in interviews they are worried that Trump will cut deals with companies that could hurt American consumers.

“If a transaction is harmful to competition and merging companies raise prices to consumers by 10 to 15 percent, it would not be good to allow that to happen just because the merged companies created some jobs,” said Gene Kimmelman, who was chief counsel in the Antitrust Division during the Obama administration. “That would be a horrible trade-off.”

Critics of the roughly $60 billion Monsanto-Bayer deal say that it will give the combined company too much pricing power, particularly in the seed and pesticide markets. While Bayer is known for its aspirin and other consumer products, the German conglomerate is also a big player in agriculture.

“I am concerned that the merger will curtail chemical and seed choices, and raise prices for farmers and the American consumer,” said Sen. Charles Grassley, R-Iowa, in a letter to the Justice Department.

Bayer and Monsanto together control 70 percent of the U.S. market for cotton seeds.

Monsanto and Bayer announced after the Trump meeting that the combined company would spend $16 billion on research and development “over the next six years with at least half of this investment made in the United States.”

But it’s not at all clear that this investment is tied to the merger. As the Wall Street Journal has noted, that figure is not any higher than the rate at which the companies are already spending on R&D.

It’s also unclear what, if anything, Trump promised the CEOs in return for the jobs pledge. There have been conflictingreports about what happened in the meeting. The transition team didn’t respond to a request for comment. The companies declined to comment beyond a public statement that says they will “create several thousand new high-tech, well-paying jobs after integration is complete.”

Merging companies typically tout the benefits of proposed deals. But antitrust enforcers spend a lot of time scrutinizing whether those benefits would actually result from the merger, rather than from business decisions that would have been made anyway.

And antitrust experts said that if Trump pushed the Department of Justice to allow a merger through in exchange for a promise of job creation, such a pledge would be difficult to enforce. What would happen, for example, if the company reneged on adding jobs after the merger had been completed?

Trump’s meetings with CEOs have raised concerns inside the Justice Department itself.

“It is troubling that presidents of companies whose cases are before the Antitrust Division would be meeting with the president-elect,” said one DOJ antitrust staffer. “We’re a law enforcement agency and we pride ourselves on enforcing the law and looking at a case objectively and deciding whether it would or would not violate the antitrust laws.”

Republicans have also raised concerns about Trump’s meetings. “Businesses are entitled to predictability as it relates to transactions and potential mergers and acquisitions,” said Larry Thompson, the first deputy attorney general in the George W. Bush administration.

The Department of Justice’s rulings “always reflect the prevailing administration’s policy views about certain things,’’ he said. But they “should be free of direct political intervention.” Thompson noted that he had no insight into what was said during Trump’s recent meetings with the CEOs.

During the campaign, Trump came out against AT&T’s proposed acquisition of Time Warner “because it’s too much concentration of power in the hands of too few.” Time Warner owns CNN, a frequent target of Trump’s ire. 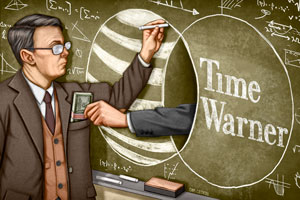 The economists are leveraging their academic prestige with secret reports justifying corporate concentration. Their predictions are often wrong and consumers pay the price. Read the story.

Since the campaign, Trump has moderated his tone on the AT&T-Time Warner deal. He also appointed transition antitrust experts who are friendlier to corporate consolidation than the Obama administration. What wasn’t anticipated is the possibility that Trump might cut his own deals on mergers typically scrutinized by the Justice Department.

As president, Trump has the authority to set antitrust policy. But direct intervention by a president in specific cases has been almost unheard of for decades.

The Justice Department has extensive guidelines for how it assesses whether a particular merger violates antitrust law. Teams of DOJ lawyers and economists study company documents and interview competitors and customers to determine whether a merger will lead to price increases or harm innovation. If the review concludes that the merger is harmful, the department can sue in federal court.

As ProPublica reported last year, some Antitrust Division staffers were upset after DOJ approved the 2013 merger of American Airlines and U.S. Airways. The merger was the focus of an intense lobbying effort by former Obama administration officials. But there were no allegations that President Obama or the White House intervened in that case.

Last year, an Obama White House spokesperson told us that antitrust “enforcement decisions are made independently. The White House does not play a role in those decisions.”

In decades past, presidential intervention in specific antitrust cases has been connected to scandal.

In late 1963, Lyndon Johnson leaned on the president of the Houston Chronicle — which had long been critical of Democrats — to support him in the pages of the newspaper in exchange for antitrust approval of a bank merger. The president of the newspaper owned one of the banks. As recounted by Johnson biographer Robert Caro, the newspaper executive agreed to Johnson’s demand for a letter promising editorial support in exchange for letting the merger through. The Antitrust Division had been critical of the deal but was overruled by Johnson.

Nearly a decade later, in 1972, a scandal erupted around President Richard Nixon’s intervention in an antitrust case involving International Telephone and Telegraph, ITT. Columnist Jack Anderson reported that the case against the company had been dropped in exchange for a large donation related to the upcoming Republican convention.

Tapes later emerged showing that Nixon had called the deputy attorney general and told him:

“I want something clearly understood, and, if it is not understood, [Antitrust Division chief Richard] McLaren’s ass is to be out within one hour. The IT&T thing — stay the hell out of it. Is that clear? That’s an order. The order is to leave the God damned thing alone. … I do not want McLaren to run around prosecuting people, raising hell about conglomerates, stirring things up at this point.”

James Rill, who headed the Antitrust Division under George H.W. Bush, in 2014 wrote that the Johnson and Nixon interventions were “plainly on the inappropriate, possibly illegal, side of the line.”

The memo goes on to say that with the exception of national security matters, “all initial communications between the White House staff and the Justice Department regarding any specific pending Department investigation or criminal or civil-enforcement matter should involve only the Counsel to the President or Deputy Counsel to the President and the Attorney General or Deputy Attorney General.”

During Jeff Sessions’ recent confirmation hearing to be attorney general, he said: “I have no hesitation to enforce antitrust law … and there will not be political influence in that process.”