On Monday, WikiLeaks made a big splash when it released a still-classified military video from 2007 that shows a U.S. helicopter gunship shooting down a group of men in a suburb of Baghdad.

Reactions to the video range widely: Some believe it betrays a possible war crime; others find it completely justifiable. Interestingly enough, many commentators fail to mention that, in recent weeks, the military itself has made some serious admissions about shooting civilians.

During a videoconference to answer soldiers' questions in March, military officials said that U.S and allied forces had killed 30 Afghans and wounded 80 others during shooting incidents at Afghan checkpoints and during convoy runs, the New York Times reported in a little noticed story. Gen. Stanley McChrystal said that military inquiries into the incidents revealed that none of civilians had turned out to be threats.

“We have shot an amazing number of people, but to my knowledge, none has ever proven to be a threat,” McChrystal said during the videoconference, the Times reported.

Earlier this week the U.S. military did an about-face and admitted that American forces killed three Afghan women during a nighttime raid in February. The military had previously denied involvement in their deaths.

The aerial footage of the attack begins with several men walking down a street in Baghdad. The audio of transmissions between the helicopter pilots and gunners indicate that they believe some of the men in the group are armed, but it's unclear from the video whether they are. The military personnel request permission to engage, and it is granted. They fire on the men, most of whom are struck down immediately. One in the group is wounded and proceeds to slowly crawl away. An unmarked rescue van pulls up, and two men get out of the vehicle to help the wounded man and transport him elsewhere, but the personnel in the helicopter request permission to shoot the van, and when it is granted, they fire on it. Later, ground reconnaissance reveals that two Iraqi children are in the van and are wounded. Both the man who had been crawling and another man who was killed in the first round of fire were later identified as journalists working for Reuters. 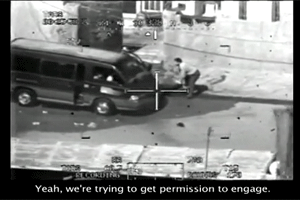 In black-and-white and shot from a helicopter, the 17-minute, edited and subtitled WikiLeaks video leaves a great deal open to interpretation. On Tuesday WikiLeaks posted the original video on its CollateralMurder Web site -- 38 minutes of unedited footage from the helicopter gun-camera. While the unedited version may allay criticisms of selective editing, what it doesn't provide is context on the larger climate of Baghdad that day.

David Finkel, a Washington Post staff writer, was with the same battalion of soldiers in Iraq that day in July 2007, doing reporting for his book, "The Good Soldiers." In a discussion earlier this afternoon, he said that the attack occurred "in the midst of a large operation to clear an area where U.S. soldiers had been getting shot at, injured and killed with increasing frequency. What the Reuters guys walked into was the very worst part, where the morning had been a series of RPG attacks and running gun battles."

At the time, the military issued this press release, announcing a "firefight" in New Baghdad, in which nine insurgents were killed, one was wounded, and two civilians -- the journalists -- were killed. Both the video and reporting by Reuters shows that no fighting was occurring on the street the men were walking on, though "there had been reports of clashes between U.S. forces and gunmen."

Eugene Fidell, a professor of military law at Yale Law School, told me he was "disturbed" by the video when he saw it. "They didn't have much to go on," he said. "Who would they not have fired at? It looks like it was declared a free fire zone."

The military account, however, suggests that the military took this incident -- in all, 38 minutes, on one stretch of a road -- to be part of a larger "firefight," even though the only shots fired in this video are from the soldiers in the helicopter. By definition, "firefight" implies that shots are fired between at least two parties. The military's press release, and the news reports that followed, all described the journalists' deaths as occurring during a firefight or a "clash with militias" -- a clash that is not apparent from watching the video alone.

On Monday, the Pentagon released documents that were part of an earlier investigation into the shooting incident. It concluded that the military personnel identified a threat "with reasonable certainty" and "satisfied all requirements to initiate an engagement."

As for the Reuters journalists, the military's investigation concluded that "only after an extensive review" of the attack weapons team's "gun-camera video and with knowledge of the two missing media personnel, is it reasonable to deduce that two of the individuals intermixed among the insurgents located in the engagement area may have been reporters. ... The aircrews erroneously identified the cameras as weapons."

Context for Military Shootings of Civilians

From a New York Times piece about a military shooting incident involving civilians:

A preliminary military investigation found that the Marines killed at least 10 civilians and wounded dozens along a stretch of road .... and no evidence that they were being fired upon.

The killings illustrate the difficulty American forces have encountered in fighting an enemy who often wears no uniform, uses civilians for cover and understands the limits of the American military's strict rules of engagement.

But they also show how hard it can be for officers to control the actions of heavily armed troops in the heat of battle.

If you're thinking that excerpt is referring to the WikiLeaks incident, you'd be wrong, though it easily could be. It's actually from a piece describing a military shooting incident in Afghanistan in March 2007. And in 2005, in what was deemed "potentially the gravest violation of the law of war by U.S. forces" in Iraq to that point, Marines went from house to house shooting civilians in Haditha, Iraq, killing 24 civilians, many of them women and children. Even following the Haditha incident, charges were dropped for all but one of the Marines involved. It's also worth noting that Marines responsible for the Haditha shootings argued at the time that the rules of engagement were followed, which has also been the military's position on the Baghdad incident.

The Army's rules of engagement and the Geneva Conventions require "positive identification of hostile intent before shooting." The military says that in Baghdad, "hostile intent was exhibited by armed insurgents peering around the corner of a home to monitor the movement or activities of friendly forces." It does not address or justify its rationale for shooting the individuals who were assisting the wounded Reuters reporter.

WikiLeaks says it has more evidence of similar civilian shooting incidents to release, including footage of the military bombing more than 100 civilians in Afghanistan. The organization says it is performing intensive research around that video and will release it when it is ready.

Correction: We've corrected this post to reflect that WikiLeaks "posted" the full version of the video to its CollateralMurder Web site on Tuesday. We originally said WikiLeaks "released" the full version on Tuesday. While Google cache shows the video was not on the WikiLeaks site on Monday, some have pointed out that it was posted to YouTube earlier and may have been made publicly available on YouTube prior to Tuesday. We've reached out to WikiLeaks with emails and phone calls about the precise sequence and reasoning behind the videos' post times, and will update with further clarification when we have it.