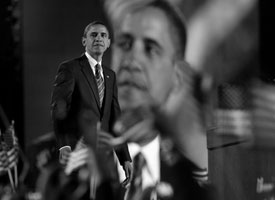 [Update11.17: Obama just released more details about his proposals on transparency. Here's a short piece we've just posted about them.]

After almost eight years under one of the most secretive administrations in history, open records advocates are hopeful that President-elect Barack Obama will keep his promise to run a transparent presidency. But his record on the issue is not spotless.

I reported in The Dallas Morning News in February that while Obama campaigned for the Democratic bid for the White House he vowed that as president, he would put more information online, including data, legislation and online hearings and meetings.

At a speech on the Google campus in November 2007, Obama said he would use technology to make government more accessible to the public. And make sure the public has access to government information.

Sen. Obama also pushed for and co-sponsored legislation in late 2007 that beefed up the Freedom of Information Act.

Chicago Sun-Times Washington Bureau Chief Lynn Sweet pointed out in November that "as a candidate, he still has some ways to go on [the transparency] front himself…Not on Obama’s public schedule today and Tuesday are three high end fund-raisers in northern California."

And early in his campaign, Sen. Obama told reporters in response to requests that he had no documents from his time in the Illinois Senate.

And while he served in the state’s Senate, he voted along with the majority of senators for a blanket exemption of all computerized mapping data from the state's open-record law.

"We have a president-elect that really gets it," said Charles Davis, executive director of the National Freedom of Information Coalition.

Reversing the secrecy measures put into place by the George W. Bush administration will not be easy.

"The openness community will expect a complete repudiation of the Ashcroft doctrine," Davis said, referring to the White House’s decision to be more restrictive in responding to Freedom of Information Act requests.

Davis also said that the many new categories of classification created under the Bush administration that concealed information from the public based on categories such as "sensitive, but unclassified" and "critical infrastructure information" reverts to simply classified or not classified.

"I’m excited, but I’m reasonable, he said. "I’ve been around enough to know that secrecy is a bipartisan disease."