When Renee Royak-Schaler unexpectedly collapsed and died on May 22, no one ordered an autopsy.

Not the doctors at Howard County General Hospital in Columbia, Md., where the 64-year-old professor and cancer researcher was pronounced dead.

Not the Maryland Office of the Chief Medical Examiner, which passed on the case because no foul play was involved.

And not Royak-Schaler’s physicians at Johns Hopkins University School of Medicine who had diagnosed cancer in her hip two days beforehand but acknowledged they didn’t know what had caused her unforeseen death.

A half-century ago, an autopsy would have been routine. Autopsies, sometimes called the ultimate medical audit, were an integral part of American health care, performed on roughly half of all patients who died in hospitals. Today, data from the Centers for Disease Control and Prevention show, they are conducted on about 5 percent of such patients. 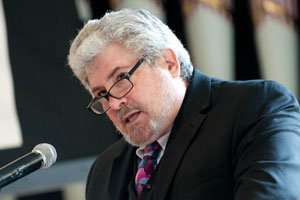 As Royak-Schaler’s husband, Jeffrey Schaler, discovered, even sudden unexpected deaths do not trigger postmortem reviews. Hospitals are not required to offer or perform autopsies. Insurers don’t pay for them. Some facilities and doctors shy away from them, fearing they may reveal malpractice. The downward trend is well-known — it’s been studied for years.

What has not been appreciated, pathologists and public health officials say, are the far-reaching consequences for U.S. health care of minuscule autopsy rates.

Diagnostic errors, which studies show are common, go undiscovered, allowing physicians to practice on other patients with a false sense of security. Opportunities are lost to learn about the effectiveness of medical treatments and the progression of diseases. Inaccurate information winds up on death certificates, undermining the reliability of crucial health statistics.

It was only because of Royak-Schaler’s connections that her case ended differently. Her colleagues at the University of Maryland School of Medicine urged her husband to authorize an autopsy and volunteered to conduct it for free. 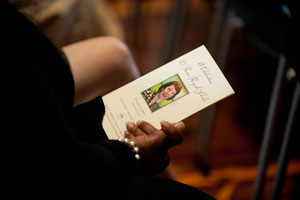 Friends and family of Dr. Renee Royak-Schaler attend a memorial service in her honor at Westminster Hall on the University of Maryland School of Medicine campus where she worked. (Jenna Isaacson Pfueller/ ProPublica)

In her case, as in so many, the autopsy revealed a surprise: Royak-Schaler, the renowned cancer researcher, had cancer ravaging her body — in her lungs, kidneys, abdomen and the marrow of her bones. A blood clot, likely related to the tumors, caused her sudden death.

Jeffrey Schaler has wrestled with anger that his wife wasn’t diagnosed sooner but said knowing how she died was better than not.

“There’s a sense of peace that accompanies that knowledge,” he said.

For the last year, ProPublica, PBS “Frontline” and NPR have probed America’s deeply flawed system of death investigation, focusing primarily on forensic autopsies, which are conducted by coroners’ offices and medical examiners when there is suspicion of an unnatural death. State laws vary, but the preponderance of deaths that occur in hospitals are considered natural. When deaths are unexplained, unobserved or within 24 hours of admission, hospitals may be required to report them to local coroners or medical examiners, but such  agencies rarely take hospital cases.

Hospital physicians, with consent from patients’ next of kin, may order a clinical autopsy to explore the disease process in the body and determine the cause of death. That was the norm 50 years ago, when the value of the autopsy was considered self-evident.

“Much of what we know about medicine comes from the autopsy,” said Dr. Stephen Cina, chairman of the forensic pathology committee for the College of American Pathologists. “You really can’t say for sure what went on or didn’t go on without the autopsy as a quality assurance tool.”

Yet, autopsy rates at teaching hospitals, which are typically run on a nonprofit basis and have an educational mission, hover around 20 percent today. At private and community hospitals, which constitute 80 percent of facilities nationwide, rates can be close to zero.

“I know new hospitals are being built these days without a place to do an autopsy,” said Dr. Dean Havlik, the Mesa County, Colo., coroner, who estimated that the overall hospital autopsy rate in his area is less than 1 percent.

Hospitals have powerful financial incentives to avoid autopsies. An autopsy costs about $1,275, according to a survey of hospitals in eight states. But Medicare and private insurers don’t pay for them directly, typically limiting reimbursement to procedures used to diagnose and treat the living. Medicare bundles payments for autopsies into overall payments to hospitals for quality assurance, increasing the incentive to skip them, said Dr. John Sinard, director of autopsy service for the Yale University School of Medicine.

“The hospital is going to get the money whether they do the autopsy or not, so the autopsy just becomes an expense,” Sinard said.

Since a 1971 decision by The Joint Commission, which accredits health-care facilities, hospitals haven’t had to conduct autopsies to remain in good standing. The commission had mandated autopsy rates of 20 percent for community hospitals and 25 percent for teaching facilities, but dropped the requirement. Many hospitals were performing autopsies “simply to meet the numbers” and not to improve quality, said Dr. Paul Schyve, the commission’s senior adviser of health-care improvement.

Doctors, too, have gravitated away from autopsies because of growing confidence in modern diagnostic tools such as CT scans and MRIs, which can identify ailments while patients are still alive.

Still, in study after study, autopsies have revealed that doctors make a high rate of diagnostic errors even with increasingly sophisticated imaging equipment.

A 2002 review of academic studies by the federal Agency for Healthcare Research and Quality found that when patients were autopsied, major errors related to the principle diagnosis or underlying cause of death were found in one of four cases. In one of 10 cases, the error appeared severe enough to have led to the patient’s death.

Schyve called the findings of such studies flawed because cases in which autopsies are performed are typically the most complex, making diagnostic errors more likely. The overall error rate is far lower, he said.

But Sinard said so few autopsies are being conducted — one survey found that 63 percent of hospitals in Louisiana performed none in a given year — that doctors and hospitals can’t say for certain how patients are dying. “They’ve never checked,” the Yale pathologist said.

Autopsies can also be a crucial tool for evaluating and improving medical care.

Dr. Elizabeth Burton, deputy director of the pathology department at Johns Hopkins University School of Medicine, said performing autopsies on patients who have died of hospital-acquired infections helps save others. Infection clusters “go in waves” in hospitals, she said. Physicians have used her findings to change antibiotic regimens, snuffing out the bacterium.

Dr. Renu Virmani, president and medical director of the nonprofit CVPath Institute, has used postmortem examinations to help reform the treatment of heart disease. Virmani and her team have collected about 250 specimens of metal stents removed at autopsy from patients who had procedures to clear blockages from their arteries. 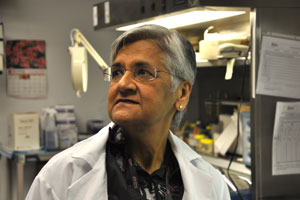 Dr. Renu Virmani, a pathologist, in her lab in Gaithersburg, Maryland. With the use of autopsies, her research helped change the way patients with certain heart conditions are treated in America. Dr. Virmani says she finds the low rates of autopsies done on patients who die in a hospital to be alarming. (Habiba Nosheen/ProPublica)

Their work showed that, in certain patients, a type of stent designed to reduce the risk of blood clots was causing delayed healing, inflammation and reactions that could be fatal. As a result, patients who receive these stents are now required to take blood-thinning medication for a year after the procedure.

Sitting in her lab in Gaithersburg, Md., Virmani peers through a microscope at a specimen slide taken from a 61-year-old man who died suddenly in 2004, about four months after receiving a clot-resistant stent. She points out signs of inflammation in the cross-section of his stented artery, describing the swirls and grains, stained pink and purple so they stand out on the slide. The autopsy showed that the stent had led to the patient’s fatal blood clot.

Autopsies should be used to evaluate the effectiveness of other therapies, Virmani said, from chemotherapy to heart-valve replacements. “The only way to learn is through autopsies.”

Hospital autopsies are even rarer when patients older than 60 die in hospitals, representing a lost opportunity to learn about age-related diseases, Burton said. More than 684,000 such patients died in hospitals in 2008 — more than one-quarter of the total deaths in the country — and just 2.3 percent were autopsied, CDC data show.

Without autopsies to confirm patients’ precise causes of death, public health officials say, the health-care system overall suffers. Erroneous information sometimes ends up on death certificates. Broad categories of disease such as cancer are probably accurate, but specifics such as the type of cancer may not be, said Robert Anderson, chief of the mortality statistics branch of the CDC’s National Center for Health Statistics.

In 1999, the Medicare Payment Advisory Commission, or MedPAC, which advises Congress about Medicare, issued a report stating that increasing the rate of clinical autopsies could improve health care and reduce errors.

The report recommended paying pathologists directly for autopsies and giving hospitals bonuses or penalties for hitting or missing target autopsy rates. The advisory group also suggested that Medicare change its hospital regulations to encourage more autopsies and use them as a standard of performance.

But Medicare has not acted upon these recommendations. An official from the Centers for Medicare & Medicaid Services declined ProPublica’s request for an interview, saying the use of autopsies in hospitals “is not within [Medicare’s] bailiwick at all.”

Other organizations that advocate for better medicine, such as the Institute for Healthcare Improvement, National Quality Forum and The Joint Commission, have not pushed for higher levels of autopsies, either, despite the widely held belief  that this could produce improved care.

Raising the rate “is not one of our priorities by any means,” The Joint Commission's Schyve said.

Dr. George Lundberg, a pathologist and one of the country’s most vocal advocates for increasing the autopsy rate, shakes his head when discussing the medical industry’s apathy about low autopsy rates.  Lundberg, the editor of the journal MedPage Today, said The Joint Commission should re-establish mandatory autopsy rates “like they used to have back in the good old days of quality when we weren’t running away from trying to find the truth [about] our sickest patients.”

One way to shake the complacency, various experts told ProPublica, would be for insurance companies and the government to pay for autopsies. But an official from UnitedHealth Group, the largest health-insurance company in the country, said the autopsy is not reimbursed because it “isn’t a procedure that would prevent or treat a sickness or injury” in a patient.

Virmani called this shortsighted. The cost of an autopsy is small relative to the money spent on drugs, treatment and diagnostic imaging, she said, and the payoff could save lives and money.

“We are letting go of something which we could really use tomorrow to improve the health care of patients,” she said.