A month ago, the CEO of Baxter International Inc., one of the world’s top producers of fluids and other equipment used to treat kidney disease, told investors on an earnings call that while the company had started to see an uptick in orders for its dialysis products, it was, at the moment, “well equipped” to supply the world.

But by early April, as COVID-19 patients were rushed into New York City hospitals at a breathtaking clip, kidney specialists throughout the epicenter of the country’s pandemic started frantically emailing one another about a critical shortage of dialysis supplies, highlighting a cruel and surprising feature of the disease for an unanticipated number of COVID-19 patients: acute kidney injury.

The novel coronavirus, a respiratory illness, is damaging kidneys at a strikingly high rate, with preliminary studies estimating that between 14% and 30% of COVID-19 patients sick enough to wind up in the intensive care unit also experience kidney failure. And the resulting damage has taxed the supply of materials like fluids, cartridges and other machine components that are used to facilitate dialysis treatments that filter toxins out of sick patients’ bloodstreams continuously for 24 hours, called continuous renal replacement therapy, or CRRT.

While a shortage of ventilators and personal protective equipment to treat COVID-19 patients has dominated headlines in recent weeks, no such public conversation has played out in regard to dialysis supplies.

Instead, nationally as in New York, the strain on the dialysis supply chain has touched off behind-the-scenes lobbying by doctors and their allies, who in recent weeks have made direct appeals to corporate executives at the industry’s two biggest players, both publicly traded, multinational corporations that produce the essential materials needed to treat patients whose kidneys are failing.

“There’s been, as far as I can tell, no federal planning and no state planning on shortages for dialysis,” said Dr. David Charytan, director of the nephrology division at NYU Langone Health. “There’s a real failure to incorporate dialysis into any pandemic planning at a state or national level.”

“I said: ‘Things are really heating up. We really need your help,’” Landry said.

And on the night of Easter Sunday, following a flurry of weekend emails among members of the American Society of Nephrology and others, city doctors’ case for more supplies was made directly to company officials at Baxter. The call followed a public appeal by one city nephrologist, who took to Twitter the day before to warn of looming disaster, writing: “Dire straits in NYC!!. Shortage of dialysis nurses, CRRT machines and fluids across all hospitals.”

The impetus for the urgent effort is evident in intensive care units across New York.

In a paper currently under journal review titled “Impending Shortages of Renal Replacement Therapy for COVID-19 Patients” provided to ProPublica, top doctors affiliated with NYU Langone Health, Bellevue Hospital Center and the Department of Veterans Affairs New York Harbor Medical Center wrote that based on a preliminary analysis, between 20% and 30% of affected ICU patients had acute kidney injury that required CRRT.

“Our efforts in the last weeks have led us to fear that another critical shortage may occur before that of ventilators: our ability to deliver renal replacement therapy (RRT) for patients severely affected by COVID-19,” they wrote. “Capacity for delivering RRT is stretched, to the point of nearly breaking.”

Whether the market is able to satisfy the need without federal intervention remains to be seen.

A week after its March 17 earnings call, Baxter notified its customers that it was imposing blanket restrictions on how much product customers could buy, limiting their purchases to a fixed percentage of their past orders. The policy, known in the industry as protective allocation, is meant to prevent stockpiling and ensures all customers get some of what they’re asking for.

But for many city nephrologists, the policy didn’t account for the surge in demand New York ICUs were experiencing.

“When we realized that supplies were getting really dangerously low, our first call was to the supplier,” said NYU’s Charytan. But because of the limits imposed by Baxter on purchase orders, the hospital wasn’t able to exceed the percentage allocated by the company. “Their policy was you can get 110% of your normal use, but we need 250%,” he said.

The federal government can intervene to augment supply.

This week, according to Politico, the Federal Emergency Management Agency, the Food and Drug Administration and the Centers for Medicare and Medicaid Services discussed one potential solution: importing more dialysis fluid. And the Defense Production Act, first used during the Korean War, affords the president broad authority to intervene in the markets in the national defense by making companies manufacture certain material, keep material from leaving the country or seizing products and reallocating supply.

The White House didn’t immediately respond to questions on Friday about whether the administration was considering use of the Defense Production Act for dialysis supplies.

“What they have at their fingertips, in order to accommodate it this week or next week, is redirection,” said Dr. Alan Kliger, a co-chair of the American Society of Nephrology’s COVID-19 task force, who helped coordinate the Easter weekend phone calls. But such a diversion of materials means other states or hospital systems expecting supplies won’t get them, he said.

ProPublica reported this month that health care product distributors, fearful of being accused of collusion, have been reluctant to steer extra supplies to hard-hit states. Absent federal direction to companies about where supplies should go, states, cities and hospitals are left to lobby for what they need.

But Dr. David Goldfarb, clinical director of the nephrology division at NYU, emphasized that the federal government could coordinate emergency manufacturing of dialysis supplies, rather than leaving it to the small set of companies already in the business. “Kidney fluid is not hard to make,” he told ProPublica. “Lots of people could make it.” 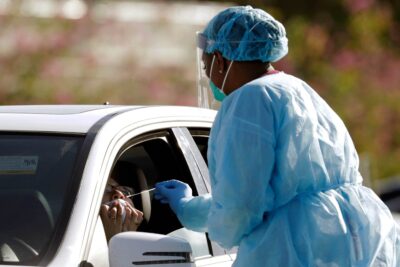 Dr. Barbara Murphy, chair of medicine for the Mount Sinai Health System, told ProPublica that the last-ditch effort to lobby companies for supplies underscores the need for concerted federal action. “It shouldn’t have to be individual division chiefs making calls,” she said. “There needs to be a national coordination of access to supplies and … how to allocate based on need.”

Lauren Russ, a spokeswoman for Baxter, said “there have been no discussions” about an order invoking the Defense Production Act for dialysis materials and the company had sent additional filter sets and fluids to New York hospitals following the Easter weekend calls. She said the company was experiencing up to five times its normal orders and defended the limits the company has imposed on purchase orders, saying they were formulated “to deliver our products where they are needed the most.”

Valle, the Fresenius North America CEO, said in a statement that the company had increased its manufacturing capacity and “implemented a national intensive renal care reserve to support continuous supply, particularly in markets most heavily impacted.”

Landry thanked Valle in an email this week for fulfilling an order of 55 machines, 10,000 boxes of a dialysis solution, and sending 12 specially trained nurses and technicians. “You helped save many lives, as surely as if you resuscitated them yourself,” he wrote.

In addition to the sheer volume of patients sickened by the novel coronavirus, a shortage of nurses is also contributing to the strain on dialysis treatment. Dialysis therapies require specialized skills and are particularly labor intensive in a crisis where staffing is thin.

What’s more, how COVID-19 actually affects the kidneys themselves may also account for the run on CRRT supplies.

COVID-19 causes so much internal inflammation that when dialysis tries to pull out toxins from the bloodstream, the debris coats the membrane and clots it, said Dr. Ashita Tolwani, who heads the CRRT program at the University of Alabama at Birmingham. That makes it hard for even routine blood thinners to stop coagulation and results in a need for more filters, pumps and other equipment. Autopsy reports show clots in the legs and lungs of COVID-19 patients who received 24-hour dialysis to stave off kidney failure, she said.

With limited resources, nephrologists in New York and throughout the country are coming up with shortcuts and makeshift solutions to a lack of needed supplies, including using regular dialysis machines and slowing them down to increase their hours of use in a practice known as shift therapy.

ProPublica spoke to doctors at nine hospitals in the city, including Montefiore Medical Center in the Bronx, Jamaica Hospital Medical Center in Queens and Bellevue in Manhattan, who described strains on the dialysis treatment for COVID-19 patients there and workarounds hospital staff had come up with to ensure care.

But the piecemeal approach has frustrated doctors on the front lines, who are reliant on private industry to urgently provide critical equipment during a public health crisis without much guidance from the government.

“Our staff has really been heroic, and the nurses too,” NYU’s Charytan told ProPublica. “But if we run out of options for fluid, there will be nothing we can do.”