Jason Cardiff didn’t want his new business to end up like his last one, an alleged pyramid scheme involving robocalling and selling unwitting customers bogus remedies to lose weight or quit smoking. One of his ventures, Prolongz, falsely claimed to offer men “increased ejaculation control.”

“I am not going to lose another company,” Cardiff told his lawyer in an April 5 email, just before detailing a fantasy list of people he wanted to place on the board of his new venture, VPL Medical Inc.

His wish list included Brian Travis Kennedy, a right-wing think tank leader and pundit with connections to the Trump administration, who Cardiff cryptically said could be the company’s “advisor to the White House.” That didn’t work out, Cardiff says.

He also wanted to make sure he had controlling stock of the company and the ability to buy out his business partner if he wanted, according to the email.

“As I (have) raised all the capital and done all the work once again,” Cardiff wrote in typo-laden prose, “I am not going to lose out on perhaps my biggest company to date. Further I have a group that wants to put in 10 mil this week.”

Seven days later, VPL was incorporated in California. Curiously, the former Mercedes Benz salesman left his name off of the business filings, which listed only his partner, Bobby Bedi, as the owner. Before ProPublica wrote about Cardiff’s work with VPL in June, the paperwork appears to have missed the gaze of the Federal Trade Commission, which had frozen his and his wife’s assets, and a court-appointed receiver who had taken over the family money.

That email exchange, along with financial records and contracts submitted to a federal court in California, provide a rare behind-the-scenes look at the nascent coronavirus mask trade, where just about anyone with who registers a corporation or limited liability company can get rich off the nation’s public health nightmare with help from a desperate government agency.

The filings illustrate how the federal government is essentially providing seed money to ambitious startups, including some run by people previously accused of fraud. Mask brokers interviewed by ProPublica described this basic blueprint:

Step One: Obtain a government purchase order. This has become startlingly easy after the Trump administration cut red tape so agencies could order personal protective equipment from nearly anyone who says they can deliver.

Step Two: Leverage that purchase order to get financing from private investors who can easily command exorbitant returns on a short-term, high-risk bet.

Step Three: Use the cash to buy masks from China.

Once the government accepts and pays, everyone involved gets a cut. And taxpayers pay inflated prices for essential personal protective equipment, or PPE, that is once again in short supply as the rate of COVID infection continues to rise.

Unlike many contractors who have failed, his company delivered the promised 8 million masks to the Department of Veterans Affairs, the agency confirmed. It shipped materials in from China and transported them by air to a VA warehouse in Chicago, records show.

“These all get fulfilled — that’s the difference,” he said. “As you can see, the government is desperate for its citizens, so it reaches out with a broad reach and says, ‘If you can get masks, I’ll pay you.’”

And VPL definitely got paid.

Bedi, the listed owner who a court receiver alleges is Cardiff’s equal partner, also walked away with $420,000.

Stacey Barker, a marketing consultant, earned a $250,000 commission just for arranging the deal with the VA.

A pending $14.1 million deal with the Department of Health and Human Services, which oversees the national stockpile, could net Cardiff and Bedi about $2 million in profit, according to court records.

Using a government order to get a loan to buy goods is not a new practice. Contractors routinely get what’s called purchase order financing from specialized lenders. But companies with little history and little credit, as is the case with many pop-up mask traders, often seek financing from private investors.

When VPL got its VA purchase order, documents show that it turned to a guy named Keith Langlands and a company registered in his name, Wave Crest Management, for a $3 million loan to buy masks from a Chinese vendor. But those details also have come under question.

A lawyer for Langlands said Friday that Langlands, a Las Vegas accountant who markets himself as a leading expert in the niche realm of setting up captive insurance firms, had nothing to do with VPL. Someone founded Wave Crest and used his name, said lawyer Michael Pariente. 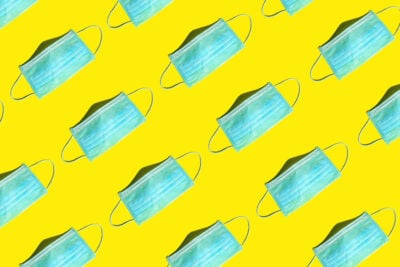 Court records show the federal government gave $20 million in contracts to a company partly controlled by a man with a history of shady business practices.

The documents suggest that the lender was to be repaid an advance plus a cut on each of the 8 million masks bought by the VA. The first batch of masks would net 5 cents per mask, a hefty return for masks that, before the pandemic, cost only a few pennies. A second expected “tranche” would yield even more — 7.5 cents a mask, according to the documents.

Cardiff says the investment “just came about by calling to different people about who was doing different types of transactions in PPE financing.” They all charged high fees, he said.

“Look, it’s a high-risk transaction for anybody,” he explained. “You’re wiring money to China. You’re hoping the masks show up.’’

The investor’s fee cited in the documents is also high considering the type of masks ultimately delivered to the VA. ProPublica also reviewed similar broker-investor arrangements involving the far more effective N95 mask, which cost about $1 each before the pandemic. Agencies such as the Federal Emergency Management Agency have ordered N95s at six to seven times that price, yet broker fees on those much higher quality masks are also often about 5 to 10 cents a mask.

Today, an unscientific perusal of Amazon shows the less effective surgical masks pricing for anywhere from $7 to $25 for a box of 50 — often less than a quarter apiece, depending on quality, which varies widely. The VA paid about 68 cents.

This transaction is just one small example of the thousands of murky deals that have sprung from the Trump administration’s $17.7 billion — and counting — spending spree to address the pandemic. Of that, about $6.8 billion was spent on PPE and related equipment, a ProPublica data analysis shows.

More than 2,000 of those contracts, including two with VPL, were given without any competitive bidding. More than 470 contractors, including VPL, got contracts totaling $2.29 billion.

For the VA masks themselves, records show VPL paid a Chinese manufacturer just $2.26 million, less than half the total taxpayers would eventually pay. Another $1.2 million went to shipping and logistics. After overhead and their personal payouts, the company invested another $285,000 from the VA deal to purchase mask-making machines from China.

On its website the company is now taking orders for masks labeled “Made in USA by VPL Medical.” The new machines can spit out half a million masks a day, Cardiff said.

“It’s easy for you to go, ‘Oh, well, Cardiff is a fraud with the FTC, but we’re delivering masks. No one is absconding with anything,” Cardiff said. “We make masks in the United States and we do source the raw material from abroad, but only because no one makes these raw materials in the U.S.”

About $2.8 million remains in VPL bank accounts, according to the court receiver who convinced a federal court judge to also freeze that cash. But it owes more than it has on hand.

The latest freeze stems from an ongoing suit filed by the FTC, which shut down a different company operated by Cardiff and his wife, describing it as a pyramid scheme. It alleged that the firm engaged in robocalling people and making “false and unsubstantiated claims for dissolvable film strips advertised for smoking cessation, weight loss, and male sexual performance.”

A federal court issued an injunction, shutting down the Cardiffs’ business and freezing their assets. In March, Cardiff was found in contempt of court for hiding about a million dollars and funding a lavish lifestyle through an account he had opened in the name of his 90-year-old father.

Most recently, the court receiver alleged that Cardiff concealed his recent windfall by keeping his name off the official business records and cites a photo of a VPL organizational chart found at its office that shows him at the top with Bedi, as well as meeting minutes and contracts that suggest they’re equal partners.

He dismissed the April email in which he laid out a vision for the company as “just rough thoughts and ideas.”

“It’s an email,” he argued. “It’s one email. It doesn’t detail my hope for anything. It details some rough thoughts.”

In an email, Barker, VPL’s own public relations and sales consultant, contradicted that defense.

“Jason Cardiff is the founder,” she told ProPublica.

Kennedy, who did not respond to a request for comment, was never added to the board, Cardiff said.

Cardiff says the FTC has unfairly targeted him and is now standing in the way of getting life-saving gear to people who need it.

“The bigger story here is — Why would you intervene in that?” he said.

With the mask business in receivership, it’s unclear if VPL will be able to deliver on its promise of 20 million American-made 3-ply masks to the national stockpile. Cardiff says he’s hopeful.