In a recent episode of “60 Minutes,” a political talk show broadcast on Russian television, the hosts discussed the case against Maria Butina, the Russian gun activist who was recently released from prison in the U.S. after pleading guilty to conspiracy to act as a foreign agent. One of the co-hosts remarked that while the Americans charged Butina with spying, “all of it turned out to be nonsense.” Sympathetic to this interpretation of events, the studio audience erupted in applause.

The hourlong show — not to be confused with the venerable CBS program — airs weeknights on the state-owned Russia 1 television network, which boasts the second-largest viewership in the country. Episodes can also be watched on YouTube, where the channel has 353,000 subscribers. Under a policy YouTube instituted last year, a box should have appeared beneath the video about Butina, explaining that the program is “funded in whole or in part by the Russian government.” Earlier this week, it didn’t, potentially leading some viewers to mistake its nationalistic commentary for a nonpartisan news report.

Such omissions aren’t uncommon. A review by ProPublica shows that YouTube’s implementation of its policy to flag state-sponsored media channels has been haphazard, giving governments in Russia and elsewhere an opportunity to spread propaganda surreptitiously. The world’s most popular streaming service allowed 57 channels funded by the governments of Iran, Russia, China, Turkey and Qatar, among others, to play videos without labels.

ProPublica found the unlabeled channels by visiting the main pages of state-sponsored broadcasters, such as Russia 1, and following the links to other featured programs, such as “60 Minutes.” Many of the channels discovered by ProPublica played local news, investigative documentaries and political analysis, while others featured sports recaps, singing competitions, flamenco dancing and medical advice.

These unmarked channels suggest that YouTube has failed to prioritize its fight against disinformation, said Jennifer Grygiel, an assistant professor at Syracuse University who studies social media. “It’s a huge issue when people around the world don’t know when they’re interacting with media produced by governments,” Grygiel said. “When corporations like YouTube don’t have mandates in the form of regulation, how they enforce and enact their own policies will be less than stellar.”

After ProPublica presented a list of the videos to YouTube, the company immediately labeled 35 of the 57 government-funded channels, including “60 Minutes.” A YouTube spokesperson said that the company’s efforts to label videos accurately are ongoing, and that it has invested heavily in improving the news experience for viewers.

YouTube decided against labeling 22 channels identified by ProPublica, but it's not entirely clear why. A YouTube spokesperson said that they didn't meet its guideline that channels must be owned by "news publishers" in order to be labeled because they carried other types of content. Yet many government-funded news publishers offer a variety of news and non-news programs. For example, China Central Television is the country’s main news network, and videos from its news channels are labeled as “funded in whole or in part by the Chinese government,” but four of the CCTV sports and entertainment channels flagged by ProPublica remain unlabeled. Nor did the company label a handful of Russia-owned talk shows and cultural programs, which discussed news and historical events, such as the fall of the Berlin Wall. A YouTube spokesperson declined to clarify what counts as “a news publisher,” who makes that judgment, and how.

YouTube rolled out contextual labels for state-funded media outlets in February 2018, amid criticism that the platform was promoting misinformation, propaganda and conspiracy theories. According to a YouTube spokesperson, a combination of machine learning and human reviewers has “identified and labeled hundreds of these channels.” Other social media platforms are following YouTube’s lead, with Facebook starting to label “state-controlled” media pages and advertisements this month.

YouTube executives touted the additional context as part of the company’s effort to empower viewers to evaluate their news sources. In the wake of the 2016 election, the Google subsidiary had come under fire for facilitating the rise of RT. Formerly known as Russia Today and described by intelligence officials as “the Kremlin’s principal international propaganda outlet,” RT became one of the site’s most-watched news sources. (In 2013, RT was the first news channel on YouTube to reach 1 billion views.)

Nevertheless, several channels from RT escaped labeling. Among them is the channel for “451 Degrees,” a German-language talk show produced by RT, which has recently promoted false conspiracy theories about Chancellor Angela Merkel and the Hong Kong protests, respectively. According to the show, which has 44,700 subscribers and appears to take place in a basement, Merkel was a Stasi collaborator and the protests were engineered by Western powers.

Eleven channels funded by the U.S. government also weren’t labeled, including news reports from Al Hurra, part of the Middle East Broadcasting Network, whose channel has 256,000 subscribers. Videos from the main English-language page for Radio Free Europe/Radio Liberty carry labels, but related channels promoted by the page, which feature Radio Liberty content in Russian, Bulgarian, Belorussian, Ukrainian and Croatian, did not. YouTube subsequently labeled all of the U.S. channels ProPublica brought to its attention.

The United States Agency for Global Media, or USAGM, which oversees the U.S.-funded international broadcasters Voice of America, Radio Free Europe/Radio Liberty, Radio Free Asia and the Middle East Broadcasting Network that includes Al Hurra, had previously alerted YouTube to the erratic labeling of its content. According to Shawn Powers, USAGM’s chief strategy officer, the agency told YouTube this year that its policy was “not being implemented evenly across our networks and across others.”

In a July 2019 email to Google, which USAGM shared with ProPublica, the agency complained that outlets from North Korea, Iran and China were unlabeled. The Iranian channels were doing “direct messaging on behalf of the regime” and “spreading conspiracy theories,” USAGM said.

This month, Radio Liberty’s then-unlabeled Russian-language channel posted an hourlong documentary, “Only the Russian People Can Defeat Putin,” featuring interviews with notable dissidents, such as Garry Kasparov. To Americans, Radio Liberty’s reporting may seem uncontroversial, but Russian government mouthpieces have accused the network of advancing a misinformation campaign. Last December, amid rising tensions in Ukraine, the hosts of “60 Minutes” lampooned the American-funded outlet for suggesting that the war in the Donbass region of eastern Ukraine was the result of Russian aggression. A commentator on the program, dissenting from the Kremlin’s spin, implored viewers to find out the truth for themselves, shouting, “Open up YouTube!”

Lapses in YouTube’s labeling have been pointed out publicly before. In February 2018, shortly after the labeling began, the Committee to Protect Journalists noticed that out of 37 state-funded public media outlets on YouTube, 18 channels lacked labels. This past June, Reuters reported that 14 Russian-backed YouTube channels with millions of views had not been properly identified as state-sponsored. Following inquiries from Reuters, YouTube subsequently labeled 13 of them.

In August, YouTube’s labeling feature, already available in the U.S., India and much of Western Europe, was introduced in Hong Kong. Some journalists were dismayed that outlets such as the BBC — which is publicly funded but editorially independent — were labeled along with Chinese government stations that denounced the recent anti-government protests. YouTube, for its part, says it doesn’t judge the quality or objectivity of news content. It notes that “the information panel providing publisher context is based on information about the news publisher made available by Wikipedia and other independent third-party sources. It is not a comment by YouTube on the publisher’s or video’s editorial direction, or on a government’s editorial influence.”

USAGM has objected to YouTube’s labels on the grounds that they conflate editorially independent media, like Voice of America, with outlets like RT.
“Part of me says congratulations to social media platforms for taking this on seriously, and I don’t want to understate how hard it is to get those policies right,” Powers said. “But this mischaracterizes our network, which is editorially independent by law.” 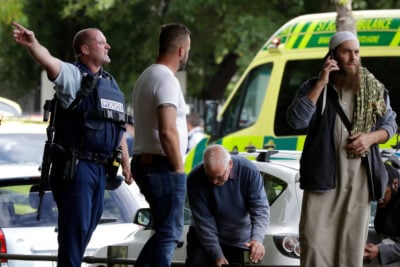 RT isn’t happy either. Anna Belkina, RT’s deputy editor in chief, said that the labels create a double standard. Privately funded channels, Belkina said in an email, are viewed “as somehow superior, agenda-less, unbiased and more legitimate than publicly funded counterparts — solely on the basis of their funding structure, which lets them avoid any labeling whatsoever. The public is being coerced into a biased Google world view, rather than being able to judge content on its merits.”

YouTube’s difficulties are merely the latest example of a global communications platform struggling with the definition of propaganda and the implications of profiting from it. In August, Facebook and Twitter accepted money from Chinese state-run media outlets to feature ads that appeared to discredit the Hong Kong protesters. Following the negative press, Twitter said that it would refuse advertisements from state-media organizations that lacked editorial autonomy.

YouTube says it is redoubling its efforts against disinformation as the 2020 election approaches, in part by promoting more authoritative content in search results and appending links to “credible sources, including Encyclopedia Britannica and Wikipedia” for videos on topics vulnerable to conspiracy theories. To some social media researchers, the labeling mishaps bode ill for these other initiatives. “I think YouTube is doing this right,” Grygiel added. “But they’re not doing this well.”