Newly grieving the murder of her son Kevin in 2015, Marcia DeOliveira-Longinetti had to attend to his affairs — including the matter of his student loans. When she called about the federal loans, administrators expressed condolences, assuring her the final balance would be written off. But after she called a New Jersey state agency that had also lent Kevin money, she got a curt letter saying there would be no reprieve. They would continue to send monthly bills of $180 to DeOliveira-Longinetti, who had co-signed the loan, for the next two years until it was repaid in full.

“I was very confused,” she said. “I felt like my son’s life was not worth anything to them; he was just money.”

ProPublica reporter Annie Waldman interviewed DeOliveira-Longinetti for an investigation on the state agency, called the Higher Education Student Assistance Authority. The story exposed how the agency pushes incredibly burdensome student loans, backed by Wall Street, with stringent rules, aggressive collections and few breaks, even for borrowers who had died. 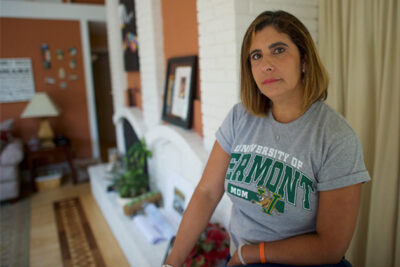 The loans have extraordinarily stringent rules, aggressive collections and few reprieves, even for borrowers who’ve died. The head of the loan agency was appointed by Gov. Chris Christie.

After the story, Gov. Chris Christie signed into law a new requirement for the state’s student loan agency to forgive the debts of borrowers who die or become permanently disabled. And — although she had to call the agency before it finally kicked in — DeOliveira-Longinetti has stopped receiving monthly bills for the loan.

“All I wanted to do was fix a problem that nobody was paying attention to,” she said. “Senators were oblivious that this was happening. Parents weren’t talking to each other about the problems they were having with student loans. If ProPublica hadn’t covered this, nobody would have known it was happening. To be a part of it was awesome.”