“To be a first responder, your DNA is built differently,” said Omar Delgado, a former Florida police officer who responded to Orlando’s Pulse nightclub shooting, in which 49 people were killed and at least 53 others wounded. “Everyone’s going to be running out of danger; you’re going to be running in.”

Nearly two years after the tragedy, Delgado and other first responders who were on the scene at Pulse shared their consequent struggles with post-traumatic stress disorder at an event co-hosted by ProPublica, 90.7 WMFE and the Orlando Public Library on Wednesday night. Held at the Orlando Public Library’s Melrose Center for Technology, Innovation and Creativity, the event also featured family members of first responders, advocates, mental health counselors and elected officials. The conversation was moderated by WMFE reporter Abe Aboraya, who is spending the year investigating PTSD in first responders as part of the ProPublica Local Reporting Network. 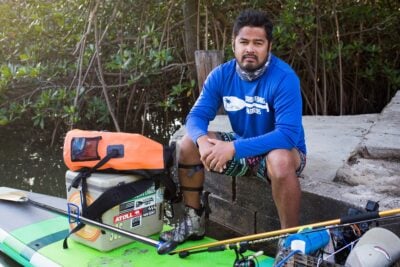 “You owe it to yourself, more than anyone else, to take care of you,” said Nancy Rosado, a former sergeant for the New York Police Department who responded to the 9/11 attacks and now works as a mental health counselor. Rosado spoke on the evening’s first panel, alongside Delgado; Jessica Realin, whose husband Gerry was on the hazmat team cleaning up after Pulse; and Alison Clarke, an Orlando police officer who was one of the first on the scene at Pulse.

“You can’t count on some magical little angel of a higher rank to come down and rescue you from the nightmares, from the intrusive thoughts when you stop at a red light,” Rosado continued. “So if this is what you’re experiencing, I beg of you to reach out for help.”

Delgado, who said he was let go from his job on the Eatonville Police Department after speaking publicly about his PTSD, said that seeking help takes courage. “Unfortunately, I became the poster child of first responder PTSD,” he said. “I’m sure there are a lot of officers, paramedics and firefighters who were there that night, and they probably won’t ever ask for help because their jobs and careers are on the line.”

In addition to the dialogue, the event integrated photography and audio storytelling. Large-scale photographs of first responders struggling with PTSD after Pulse were displayed at the event, and attendees listened to audio vignettes of the responders’ stories, in their own voices, available through their phones in an online gallery. Guests were also invited to interact with Zeus, a therapy dog who was near the scene with first responders and those affected in the days immediately after the Pulse tragedy.

The bill, signed by Florida Gov. Rick Scott in March, allows first responders who develop PTSD after a bad call to recoup lost wages in the worker’s compensation system.

Bichler pointed out that, while big events get the headlines, there is a cumulative effect over a first responder’s career that isn’t acknowledged in the current legislation. “PTSD is not typically diagnosed in first responders after a tragic event like Pulse,” he said. “This is something that occurs as an accumulation over time, most often. One of the severe limitations of this bill are all of these triggering events that limit coverage.”

Saxe said he’d also like to see corrections officers, as well as dispatchers and 911 operators, get added to the bill so they can receive coverage for their PTSD, explaining that they too experience serious trauma in their roles.