This story first appeared in ProPublica’s monthly data newsletter. Sign up for that here.

For much of the past two years I’ve been digging into a vast, $70 billion environmental cleanup program run by the U.S. Department of Defense that tracks tens of thousands of polluted sites across the United States. In some places, old missiles and munitions were left buried beneath school grounds. In others, former test sites for chemical weapons have been repurposed for day care centers and housing developments. The oldest, dating to World War I, have faded into history, making it difficult to keep track of the pollution that was left behind.

Purchase a cleaned, condensed version of Bombs in Your Backyard from the ProPublica Data Store. Or download the entire database for free.

For nearly 45 years, the Pentagon kept its program — the Defense Environmental Restoration Program — out of the spotlight, and most of these sites have never been scrutinized by the public. However, the agency has meticulously tracked its own efforts, recording them in a detailed internal database. We were the first to see it, ever. Now we’re sharing it with you.

The dataset includes details on more than 39,000 unique sites across more than 5,000 present and former military locations in every U.S. state and territory. The sites are literally in almost everyone’s backyard. And so while a few of the most notorious cleanup spots may be well-known, the tools included here can help local news outlets, the public or anyone else dive deep into the details of hidden threats that have never before seen light. 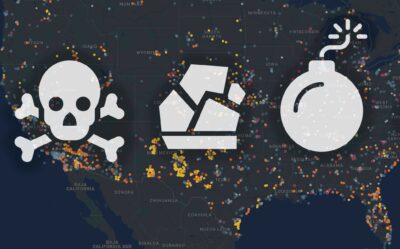 The detail is extraordinary: Contaminants — and sometimes their concentrations in both soil and water — are listed. So is the amount of money spent over decades to deal with the problems, and the budget estimated into the future to finish it. You can find managers responsible for incremental decision-making, or plot the coordinates of specific sites used for dumping or chemical spills. There are even data fields filled with comments — the wisecracks of Pentagon staffers over the years characterizing the enormity or seriousness of their tasks. And much, much more.

We used some of the data from the government’s database to plot these sites on a map of the United States, and to drill into each site with details on the contamination to be found there, including adding additional location and cost data from other sources. You may want to use the data in other ways: perhaps to focus on single sites in much more detail, charting cleanup progress and failures, funding endeavors and political turning points. For that, you can download the entire database, just as we received it from the Department of Defense.

And of course, I’d love to hear about it if you use the data for a project of your own.