Our interactive story, "Hell and High Water," includes a map with seven animated simulations depicting a large hurricane hitting the Houston-Galveston region. Four of the scenarios depict a hurricane hitting with existing storm protection infrastructure in place; three envision storm protection projects proposed by a number of universities in Texas.

Five of the simulations were developed by teams at the University of Texas at Austin, and the Severe Storm Prediction, Education and Evacuation from Disasters (SSPEED) Center at Rice University.

Coastal Spine, which simulates the P7+15 storm but includes a proposed 17-foot wall along Galveston Island and the Bolivar Peninsula, and a gate across Bolivar Roads, which would prevent storm surge from entering Galveston Bay. The Coastal Spine is a version of a proposal by Dr. William Merrell at Texas A&M-Galveston.

Two simulations are based on synthetic storms developed by the Federal Emergency Management Agency as part of the RiskMAP flood mapping study and modeled by researchers at Jackson State University. Synthetic storms, as opposed to the P7 storms that were based on Hurricane Ike, never appeared in nature, but are derived from averaging hundreds of actual storms that have hit the Texas coast.

Researchers provided all of the storm data to ProPublica and the Texas Tribune in formats used by the ADCIRC system. Run on powerful supercomputers at UT-Austin and the U.S. Army Engineer Research and Development Center's Coastal and Hydraulics Laboratory (ERDC), ADCIRC takes a variety of storm inputs and is able to derive storm surge, wind strength and wind vectors with high precision, even over local areas. ProPublica and the Texas Tribune worked primarily with three ADCIRC file formats: a fort.14 grid file, a fort.63 water elevation time series file, and a fort.74 wind vector time series file.

The fort.14 grid is a highly accurate 3-D height map of the Texas coast. The grid provided to ProPublica and the Texas Tribune by Dr. Jennifer Proft at UT-Austin was created in 2008 and contains about 3.6 million points. The fort.63 and fort.74 files provided by UT are hourly snapshots during simulated storms starting on Sept. 11, 2008 at 1 p.m. UTC and continuing for 72 hours.

The ADCIRC grids are what are called "unstructured grids," meaning the resolution varies at different locations in the mesh. The length of the lines connecting grid nodes varied from about 50 meters to about 1,000 meters within our areas of interest. Because of this variability, the resolution of any given triangle ranges from about 1,250 square meters to about 45,000 square meters. 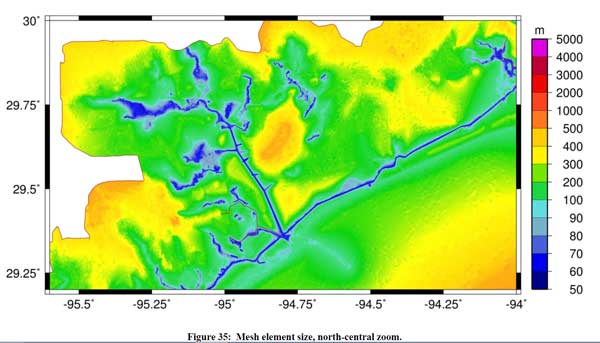 Additionally, the water surface elevations in the fort.63 files have a margin of error of about 1-2 feet, according to Bruce Ebersole at Jackson State University.

To display all of these storms on the same timeline, we synchronized the landfall of all the storms around Hurricane Ike's landfall on Sept. 13, 2008 at 7 a.m. UTC. To account for varying lengths of the time series files between all of the storms we wished to show our timeline, we synchronized our storm simulations to begin at 16 hours before landfall, and continue until 24 hours after landfall. Because the storms provided to us by Jackson State University are saved in half-hour time steps  and the UT storms are saved in hour time steps, we removed every other snapshot from the Jackson State storms before processing them for our interactive graphic.

Our application focused on an initial 160km-by-120km area of interest surrounding the Houston/Galveston area and smaller areas covering the Houston Ship Channel (32km by 15km), Clear Lake (23km by 20km) and Galveston (9km by 6km).

In order to process the ADCIRC files for display on the web, we had to compress the massive size of the initial datasets provided to us. To do that, we developed a processing pipeline that broke the grids and time series down first into our areas of interest, and then encoded averaged data into the red, green, blue and alpha channel pixels of PNG images for fast delivery to the browser.

First, we used an ADCIRC Fortran utility program called resultscope to "crop" the fort.14, fort.63 and fort.74 files to all of our areas of interest. This cut our "background" area, for example, down to a grid of about 650,000 points. We took these resulting files and encoded them into a series of data-encoded images. For each area (the "background," the Houston Ship Channel, Clear Lake and Galveston), we created a 512x512 pixel PNG image and "packed" the height data into the RGBA values of the image using OpenGL and Ruby. In these "image databases," we encoded green value to the height of the grid at a pixel location, the blue to the height after the decimal, and the red byte as a flag indicating whether the point was above or below sea level (NAVD88).

In order to format this data efficiently for transport over the Internet and manipulation in a web browser, we also "packed" each hour of the time series into PNG images, with the red and alpha values storing the wind x and y vectors respectively, the green value containing the water height at the location and the blue value containing the height of the water after the decimal. To further optimize the images for delivery over the web, we composited the time series images into sets of 1024x1024 images each containing four 512x512 images. Each storm, therefore would be a single 512x512 grid image, and ten 1024x1024 time series images, comprising 40 hours of the storm. In the application, we have seven sets of those images (for each storm), for every area of interest. The entire app is comprised of 28 sets or 308 images total. (If we had not collected the time series into quadrant images, there would have been 1,148 images altogether.)

Since the grid resolution varies at different points around the mesh, even though every pixel of our "image databases" is averaged over the same area, the underlying data may be lower resolution:

Resolutions of elevation in the real world, the ADCIRC grid, and our PNG "image databases" (Illustration: Sarah Way for ProPublica)

Our interactive graphic uses WebGL to decode these images in the browser and display the animations to the reader. In the graphic, the base image shown to the reader is a pan-sharpened true-color Landsat image of the Texas Coast. Using WebGL, we then mixed blue (rgba(18, 71, 94, 1)) into the satellite image in areas where the depth of the grid was below sea level or the surge exceeded the underlying elevation over the course of the time series.

Because it wouldn't be a hurricane without wind, we created a particle system to show the wind direction and speed. We worried that showing large amounts of particles on the vizualisation would slow the animation to a crawl, but we found a WebGL extension called instanced arrays that makes copies of just one instance of our particle and efficiently draws it thousands of times. The particles are randomly placed small rectangle meshes, and we rotate each rectangle based on the wind data in each storm's underlying "image database." For every frame we also update the rectangle's position based on the wind velocity at that point, which we store in a WebGL texture. Each wind particle only lives for about a second before it fades out and resets to it's original position. The wind speed in the visualization is 20 times as fast as in the underlying computer model because even hurricane sized wind speeds when viewed from what is essentially space would be imperceptible.

We presented other metadata about the storms, such as the storm tracks, and proposed and existing storm protection measures on the map as vector data. Texas A&M Galveston provided the current "extended" Coastal Spine scenario to ProPublica and the Texas Tribune as a low resolution raster image, which we converted into a vector file. Although it is therefore imperfect it is our best estimate of what that conception of the Coastal Spine would look like.

Several other features in the interactive graphic use the same PNG "image database" we created to present the storms, including the address-lookup function and the surge numbers at Galveston Strand, Johnson Space Center and ExxonMobil Chemical. However, this process is done server-side, because we discovered that querying pixel data in the browser using the getImageData method in canvas returns incorrect results for images with alpha transparency.

We used Google's address geocoder. The accuracy of these numbers is the same as the resolution of the areas of interest noted above.

We would like to extend our thanks to the teams at Rice, UT-Austin, Texas A&M Galveston and Jackson State University for helping us understand and present this data, especially Jennifer Proft at UT and Bruce Ebersole at Jackson State University, who have spent many hours patiently guiding us through the intricacies of storm data.