When something happens in Congress, legislators love to brag about it — or condemn it — for their audience of journalists and professionals in Washington and for their constituents back home. The text of their public statements can provide a window into what members are thinking and what matters most to them in any given week.

A new page on ProPublica’s Represent database — and a new Twitterbot — track what Congress members have said in the past week. It picks out the phrases that are most distinctive to that week’s batch of kudos and complaints contained in Congressional press releases.

Sometimes, what Congress talks about is obvious: “Marjory Stoneman Douglas High School,” for instance, became a common phrase in the weeks after the school shooting there. Other times, it’s more obscure and sheds some light on what members of Congress are focusing on, even if it doesn’t break into national news.

By clicking the word to search for it in our database of years of press releases, you’ll see that members weren’t talking about cyborg police officers. It’s the name some Democratic senators gave their bill to require phone companies to distribute free tools to stop spam phone calls: “Repeated Objectionable Bothering Of Consumers On Phones.”

And, as was noticed by several senators, “Vaisakhi” is a holiday celebrated by Sikhs.

“What Congress Talked About Last Week” is powered by the same machine-learning technology as the “Distinctive Topics” feature we launched last year that shows which members of Congress frequently focus on, for instance, “tax reform” or the “sage grouse.” 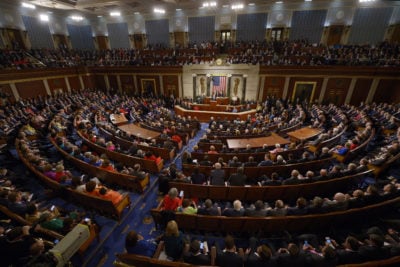 That technology is an algorithm called TF-IDF — for term frequency/inverse document frequency — which measures the ratio of a phrases’ frequency in one week’s press releases to its frequency in all the press releases in our database. So things Congress is always talking about — say, “Trump,” or “a bill” — get stripped out. We also strip out things that only one member of Congress talked about in a given week. You can see every week’s topics since we began calculating them here.