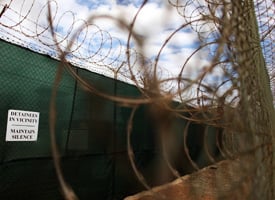 Last week in Spokane, Wash., protesters rallied against torture outside the longtime offices of a consulting firm founded by two former military psychologists who reportedly helped develop abusive interrogation techniques for the CIA and the U.S. military. The psychologists, James Mitchell and Bruce Jessen, reportedly trained interrogators to use waterboarding on U.S.-held detainees after the Sept. 11 attacks. (See this story by Katherine Eban in Vanity Fair, this story by Mark Benjamin in Salon, and this story by Jane Mayer in the New Yorker. ABC News also recently profiled Mitchell and Jessen and has footage of the two declining to comment.)

Little did the protesters know, but the consulting firm they had come to protest was no longer there.

Last month, ProPublica reached Mitchell, Jessen and Associates at a phone number linked to the American Legion building where the company lists its official address. When we called the same number last Friday, it had been disconnected with no forwarding number.

Yesterday we called another office in the building, the Center for Personal Protection and Safety, where two officers of the consulting firm are also listed as working. The center describes itself as an educational institution focused on preventing workplace violence and improving travel safety. The woman who answered the phone told us that Mitchell, Jessen and Associates had moved out of the building in April and closed its office there. She gave no further information.

The management company for the building, SDS Realty, confirmed that Mitchell, Jessen and Associates had moved out in April and left no forwarding address. In late March, the real estate company was listing the 4,100-square-foot suite being vacated by the consulting firm as available for lease at $7,346 per month.

Mitchell, Jessen and Associates is incorporated in good standing in Delaware, but does not have a current phone number listed there.

An employee at the corporations division of the Washington secretary of state's office told us that Mitchell, Jessen and Associates had not filed paperwork dissolving its business in the state. The company's next annual report is due to the state in September.

Update: May 27, 2009 5:15 PM We left a message with Roger Aldrich and Randall Spivey, two employees of the Center for Personal Protection and Safety who are listed by the Washington Secretary of State as "governing persons" in Mitchell, Jessen and Associates.

Also, a corporate database lists an Alexandria, Virginia address for Mitchell, Jessen and Associates. The phone number listed there doesn't work. But another corporation listed at the same address is Tate Incorporated, a business consulting firm. According to information on Tate's Web site, the firm's president is David Ayres, another "governing person" of Mitchell, Jessen and Associates. The phone number for Tate works, and we left a message for Mr. Ayres.

Mitchell and Jessen were formerly SERE psychologists and have been accused of "reverse-engineering" SERE techniques – such as slapping, stress positions, and waterboarding – for use against detainees held in U.S. custody. For more detail, see our previous story.

Here’s What States Are Doing to Abortion Rights in 2023

It Was Good to Be Friends With the Mayor. Then the Investigations Began.

Republish This Story for Free

Thank you for your interest in republishing this story. You are are free to republish it so long as you do the following:

Copy and paste the following into your page to republish: