The post-mortem on what went wrong at polling places across New York City on Election Day won’t be done for days, if not weeks. Across the city — from Brooklyn to Manhattan to the Bronx — ballot scanners jammed and malfunctioned, sowing chaos at polling places.

But preliminarily, it looks like one of those rare occasions where election officials can plausibly blame the weather, at least in part.

The five boroughs saw unusually high precipitation on Tuesday with nearly 100 percent humidity, as New Yorkers trudged through the rain to cast their ballots.

Those are not exactly perfect conditions for the DS200, the widely used ballot scanner manufactured by Nebraska-based ES&S. According to its technical documents, the scanner becomes downright uncomfortable when the weather turns sweaty.

Although it can be stored in more humid conditions, the machine is tested to operate at a relative humidity between 10 and 50 percent, according to a bid document ES&S provided to the state of Michigan last year. In a technical manual provided to Georgia in August, the company recommends storing the ballots themselves at a humidity between 35 and 55 percent.

Climate control may have made a difference, but as school gyms and other voting sites grew stifling and oppressive, poll workers at some polling places opened windows. At PS 11 in Brooklyn, the small reprieve of open windows was even met with cheers from overheated voters.

Meanwhile, voters with waterlogged attire or forced to stand in lines in the rain had a hard time keeping ballots dry. “Wet ballots — caused by people waiting in the rain — are causing scanners to malfunction at my poll site” in Manhattan, New York City Council Speaker Corey Johnson tweeted.

“The DS200 is not protected against harmful ingress of moisture,” reads a 2012 manual ES&S sent to Idaho election officials. The manual warns not to “operate the scanner in an excessively wet environment.”

Douglas Kellner, the co-chair of the New York State Board of Elections, told WNYC that the damp conditions were only half the story.

“Just based on my personal, anecdotal experience, there were more jammed scanners than I would have typically seen,” Kellner said. “I attribute that to the two-page ballot and the wet weather.”

New York this year for the first time used a ballot that had to be separated along a perforation before both sections were fed into the ballot scanner. Mayor Bill de Blasio called the situation “absolutely unacceptable” in an interview with the radio station 1010 WINS.

“ES&S is working closely with election officials in New York City to ensure that ballots are being processed accurately and securely,” the company said in a statement on Tuesday. “Due to an unusually long ballot, some precincts have experienced ballot jams due to ballots that are not separated properly or have excess moisture.”

At PS 207, in the Kingsbridge section of the Bronx, all four ballot scanners went down for nearly two hours. A representative from the New York City Board of Elections pinned the jams on the humidity and the rain, with voters pushing damp ballots too hard into the scanners.

After an ES&S technician arrived to fix the machines, one of the repaired scanners broke down again, this time irreparably. She told a polling official that the jams kept happening in the same way and would remain a problem throughout voting. 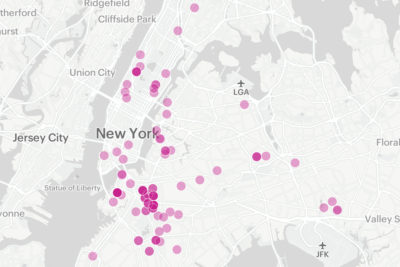 Farther downtown, in the Bronx’s Mount Hope neighborhood, Judith-Anne Bryan, a poll worker, said she had never seen so many scanners down at once. Stephen F. Williams, the site coordinator at another Bronx polling place, said, “I can’t call a technician up here when there are 50 and 60 other polls jammed.”

The consequences may go beyond long lines and irritated New Yorkers. Scanners, when functioning properly, catch instances where voters accidentally vote for two candidates for a given position, giving them the opportunity to correct their ballot, according to Joseph Lorenzo Hall, the chief technologist at the Center for Democracy & Technology. “What we may see is a much larger number of invalid ballots in top ticket races than we normally see because so many voters didn’t get the benefit of having the scanner check their work,” Hall said.

As the day wore on, concerns grew that emergency ballot boxes might overflow. “I could ask the principal for a large garbage can and put them in there,” said George Maczkiewicz, the coordinator at another Bronx polling site.

Ray Shappell, of Brooklyn, said his wife, who had a morning meeting at work, nearly left without voting at PS 22, where three downed scanners left a two-hour line stretching halfway down the block.

“I would compare it to horrible experiences at the DMV,” Shappell said. “Your ability to vote should not be compared to trying to renew your license.”