This article is co-published with The Philadelphia Inquirer.

Pennsylvania, one of the most hotly contested battlegrounds in the presidential election, has rejected 372,000 requests for mail-in ballots, straining election offices and bewildering voters.

More than 90% of those applications, or about 336,000, were denied as duplicates, primarily because people who had requested mail-in ballots for the state’s June 2 primary did not realize that they had checked a box to be sent ballots for the general election, too. Voters have also been baffled by unclear or inaccurate information on the state’s ballot-tracking website, and by a wave of mail ballot applications from political parties and get-out-the-vote groups. County offices across the state have been forced to hire temporary staff and work seven days a week to cope with the confusion.

“The volume of calls we have been getting has been overwhelming,” said Marybeth Kuznik, elections director in Armstrong County, northeast of Pittsburgh. It’s been preventing her office from working on anything else: “It has been almost like a denial of service attack at times because it seemed that sometimes all I could get done was answer the phone!”

Though it may deter some people from voting, the mass rejection of ballot applications is unlikely to have a big effect on turnout. Voters who submitted duplicate applications should eventually receive a ballot. Those who don’t can still vote at the polls on Election Day.

Overall, one out of every five requests for a mail-in ballot are being rejected in Pennsylvania. An estimated 208,000 Pennsylvania voters sent in the spurned requests, some submitting them multiple times. Although the state’s email rejecting the requests describes them as duplicates, it doesn’t explain why, prompting some people to reapply. ProPublica and The Philadelphia Inquirer identified hundreds of voters who submitted three or more duplicate applications; one voter appears to have submitted 11 duplicates.

The administrative nightmare highlights the difficulty of ramping up vote-by-mail on the fly without enough voter education. Last year, Pennsylvania passed a law that removed the state’s tight restrictions on mail ballots and enabled any registered voter to receive a ballot without giving a reason such as travel or ill health. In 2018, only 4% of votes in Pennsylvania were cast by mail. In the June primary, with the pandemic discouraging many people from voting in person, that percentage rose to just over half.

“States that have large numbers of successful mail voters, pre-pandemic, have educated their voters about this process over decades, and Pennsylvania is trying to do this in a matter of months," said David Becker, founder and executive director of Center for Election Innovation & Research in Washington.

Nongovernmental groups have inundated Pennsylvania voters with mail-in ballot applications, making it easy to request ballots — and contributing to the flood of duplicates. Voters often believe these unsolicited and sometimes inaccurate applications come directly from elections offices. Some voters are filling them out even if they’ve previously submitted a ballot application.

These groups have created “confusion for voters and the likelihood that voters will not realize their application has been processed and they don’t need to submit another one,” said the Pennsylvania Department of State, which oversees elections. It added that “some voters may have forgotten that they opted to be put on the annual mail ballot list when they applied for a ballot for the June primary.”

Workers must handle every application individually. “We basically have to treat them all the same,” said Bill Turner, acting elections director for Chester County. “We’re taking a tremendous amount of staff time and effort only to find out it’s a duplicate.”

The rejections engender mistrust in already-anxious voters. Craig Sewall, 33, a registered Democrat and a Ph.D. student in social work at the University of Pittsburgh, got an email from the state this summer inviting him to apply for a mail-in ballot for the general election. He had voted by mail in the primary and was “very motivated to vote” in the presidential election, he said. So he followed the email’s prompts and applied for a ballot online.

A few weeks after requesting a ballot, Sewall received an email from the state. “Your application was declined because of the following reason: DECL - DUPLICATE APPLICATION,” the email read. It advised him to call the Allegheny County Board of Elections if he had any questions. But when he called, he said, the office was too busy to answer his questions. “I’ve been fairly persistent and I’m pretty disillusioned,” he said.

The mix-up led Sewall and his wife, who followed the same steps but received a ballot, to reconsider voting by mail. “We’re still not sure, we might just end up surrendering our ballot and voting in person just to make sure,” he said.

Amie Downs, an Allegheny County spokesperson, acknowledged that the problem has strained staff. “We continue to try to speak with everyone,” she said. “Even with the addition of extra telephone lines, a queue and the assistance of our call center, callers are still having difficulty getting through.”

In retrospect, Sewall said, he thinks he checked the box on his application for the primary ballot to receive one for the general election. Doing so would have placed him on a “permanent list” that voters can opt into as part of the new law. When applying for mail ballots, voters can check a box to vote by mail in every election that year, as well as to automatically receive an application form annually.

“Because becoming a permanent mail-in voter is new, this is the first time that they would automatically receive a ballot without having to apply for it,” said Sarah Seymour, elections director in central Pennsylvania’s Blair County, where more than one in four applications is a duplicate. “They’re unsure, so they’re sending in another application.”

Frustrated voters like Sewall are contacting election offices by the thousands. Montgomery County last week received 5,000 calls a day — more than 911 receives during a hurricane, according to Lee Soltysiak, the county’s chief operating officer and clerk of its elections board. Philadelphia has had so many calls it started outsourcing them to the city’s 311 call center. On several days in the last week, Allegheny County has seen more than 7,000 calls a day.

“The phones don’t stop ringing,” said Tim Benyo, chief clerk for Lehigh County elections. “They ring through the night and on weekends.”

At one point this summer, Allegheny officials were processing mail-in ballot applications 24 hours a day, with a peak of 125 workers. On some recent days, 40-50% of ballot applications in the county are duplicates. The county has experienced other snafus as well. On Wednesday, it announced that, because of a printing error, it had sent incorrect ballots to 28,879 voters.

Adding to the confusion, voters and election officials say that the state’s online application and ballot-tracking system sometimes has inaccurate or outdated information, because it relies on counties’ goodwill to keep it current. “The state website ballot tracker, polling place locator, and find your voter registration tools are not working correctly all of the time, leaving voters to call to verify information that they should be able to find online,” said Downs, of Allegheny County.

The Department of State said that “depending on when and how the counties update the ballot and mailing information” in the state systems, “the mail-in ballot tracker on votesPA.com may not reflect precise information.” The department added that it is working with counties to ensure that voters get the correct information: “As more ballots are mailed in the coming days and weeks, the tracker will more accurately reflect each county’s activity and the status of individual voters’ ballots.”

Months of baseless attacks by President Donald Trump that mail voting is susceptible to widespread fraud have soured many Republican voters on using the method and created a large partisan divide. Of Pennsylvania’s approved ballot applications as of Wednesday, more than 948,000 have come from Democrats, 343,000 from Republicans, and 241,000 from independent and third-party voters.

Pennsylvania last year began allowing voters to apply online for mail-in ballots, but the state system doesn’t notify voters that they are submitting a duplicate. The online form links to a tool where voters can check their registration status, but it doesn’t link to the tool where they can check their vote-by-mail status.

That ballot-tracker tool is itself confusing. Voters whose applications have not yet been approved do not show up in the system — instead, the site says “record not found.” Voters who have been approved to receive a mail-in ballot have their status listed as “pending,” without further explanation.

“There’s nothing on the website that tells a voter that ‘pending’ means you’ve been approved but your ballot hasn’t been sent out yet,” said Christine Reuther, a council member in Delaware County in suburban Philadelphia. “I mean, I wouldn’t know that’s what pending means.”

Another consistent problem: the terse rejection email sent to voters. The email, like the website, should be clearer, county officials said.

“They could explain what that means. A duplicate: you have applied before, we already have an application on file for you. Sit back, relax, it’s going to be coming in the mail,” Soltysiak said.

A longtime voter in his 60s in the Pittsburgh area, who asked to remain anonymous to protect his privacy, was rejected three times because of duplicate applications. He kept applying, he said, because he never heard back from his local election office. He called the office “a zillion times, but no one ever answered,” he said.

This summer, he received a mailer from an official-sounding voting organization that listed a “Jr.” after his name. He has never used a Jr. suffix, and he worried that using that ballot application would disqualify his vote. “I have no interest in having more than one ballot,” he said.

The voter was able to get an explanation about his mail-in ballot applications only after a local election official fixed a problem with his voter registration — his first such problem in nearly 30 years of voting in Allegheny County. “I have never seen such a mess with the county government in my life,” he said.

By that time, voting by mail was too much trouble. “I gave up and I’m voting in person,” the voter said. “I figured the hell with it, I’m done.” 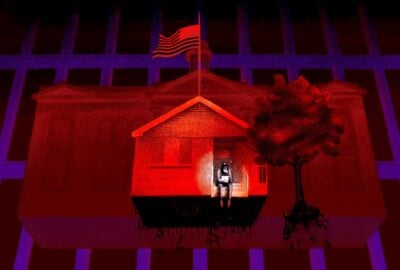