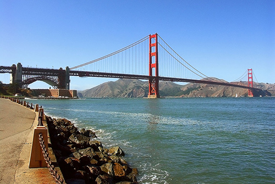 This just in from California: stimulus projects are kind of boring. The Los Angeles Times reports that much of the stimulus money in the Golden State “so far has gone toward run-of-the-mill projects” like replacing guardrails and renovating restrooms at military bases — work that some say would have been completed anyway. Emily Rusch of the California Public Interest Research Group tells the Times that more money should have gone to "projects that would both be built quickly and achieve long-term goals such as reducing pollution and congestion.” Edward DeSeve, an adviser to President Obama on the stimulus, responded that the first goal for the money was to get it out the door quickly.

A bus factory in Minnesota that Vice President Joe Biden said would benefit from the stimulus is laying people off. Minnesota Public Radio reports that New Flyer, a Canadian company, will cut jobs at its St. Cloud, Minn., plant, after the Chicago Transit Authority delayed an earlier order for 140 diesel electric hybrid buses. New Flyer will eliminate over 300 positions.

The plant and St. Cloud were featured last month in a story we did on the progress of the stimulus. St. Cloud is one of eight cities we’re tracking around the country.

Is the stimulus making the recession worse? The Cato Institute’s Alan Reynolds writes in today’s Wall Street Journal that between 1887 and 1929 — before the advent of “big government” and large-scale economic intervention — recessions lasted an average of 10.3 months, while recessions since have been longer, an average of 11.3 months. “The economy's natural recuperative powers before the 1930s proved superior to recent tinkering by Big Government economists, politicians and central bankers,” he writes. He adds that countries with lower government spending (as a proportion of GDP) have fared better in the current recession than those, like the U.S. and many European countries, whose governments are more active spenders. Reynolds neglects to mention how, exactly, bigger government leads to longer recessions. But now we’re just nitpicking.