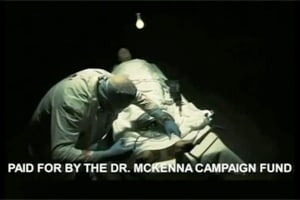 Most recently, I went around and around with the coroner about the autopsy of a man named Matthew McDonald. Police shot McDonald to death in 2005 shortly after Hurricane Katrina tore through Louisiana. I needed the report for a story I was working on with journalists at the New Orleans Times-Picayune and PBS "Frontline."

First, one of Minyard's deputies told me the document existed but I couldn't have it, because it was part of a homicide case. Then the story changed: Minyard and his attorney told my colleagues at the paper that the coroner had lost the autopsy report. That seemed a bit odd.

Sheri Fink, who reported on the events at Memorial Medical Center during Katrina, has also documented some of the more interesting decisions made by the doctor.

Suffice it to say, I was intrigued when a New Orleans blogger forwarded a link to a new campaign ad criticizing the coroner, who is running for a 10th term after 36 years in the job. (Coroner is an elected post in New Orleans.) And here it is, one of the more jaw-dropping campaign ads in recent political history:

The spot portraying Minyard as a Frankensteinian crazy was paid for by Dwight McKenna, M.D., a convicted tax evader who's running against Minyard. It's airing on local TV.

The video highlights a mini-scandal from the 1990s, when Minyard was sued for allegedly removing bone pieces and corneas from the deceased and passing them onto transplant centers without permission. "It's contemptible," McKenna said in an interview.

Of course, some people are going to find the ad contemptible, but McKenna defends it. "The ad is, we believe, factual," he said. "It's fair play. It's done in a humorous way."

McKenna didn't want to talk about his 1992 conviction on federal tax charges for underreporting his income by $367,000. He served nine months in prison.

As for Minyard, he said his office never sold body parts, as is suggested by the ad, and noted that he was dropped from the lawsuit. In fact, Minyard said, "organ donation is the thing I'm most proud during years here as coroner."

The coroner thinks the spot is actually helping him. "People are coming up to me and saying it's atrocious," he said.