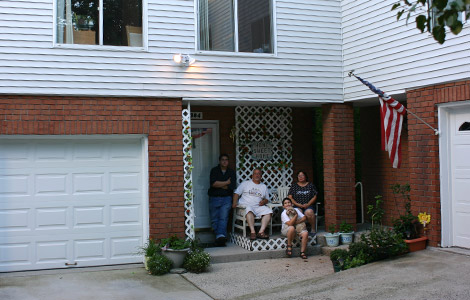 The Acevedo family, of Staten Island, N.Y., has been in a trial loan modification for about a year. (Photo by Karen Weise/ProPublica) 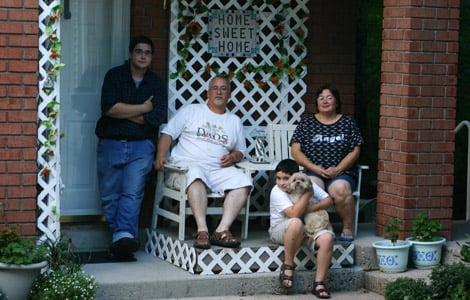 It all started after the father, Michael, an exterminator, second from left, was laid off, and their house went into foreclosure. (Photo by Karen Weise /ProPublica) 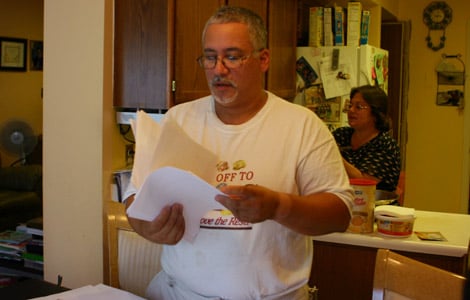 Now, as they hope for a permanent loan modification, they continue to have monthly court appearances. (Photo by Karen Weise/ProPublica) 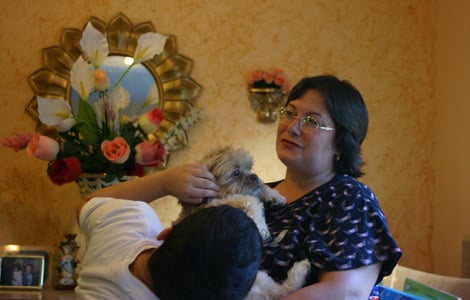 Jonathan, 9, left with his mother Concetta, doesn't want to leave his home and friends if his family loses their house. (Photo by Karen Weise/ProPublica) 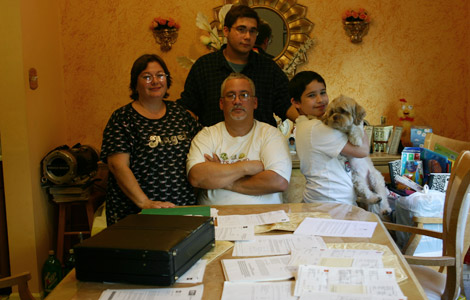 Of the loan mod process, Michael says, 'I wonder if they have a little cube, and they throw it up in the air to see what decision they're going to make.' (Photo by Karen Weise/ProPublica)

Listen to Michael and Concetta talk about the loan mod process.

Last fall, Wells Fargo told Michael and Concetta Acevedo that after a three-month trial, they could get a permanent mortgage modification that would allow them to keep their Staten Island townhouse.

Instead, 10 months later, the Acevedos are still making trial payments and fighting to save their home. The delays have dragged on even though a judge penalized Wells Fargo for errors processing their case. The Acevedos' trust in the bank -- and the modification process -- has run dry.

"I wonder if they have a little cube, and they throw it up in the air to see what decision they are going to make," said Michael Acevedo.

More than 1.3 million homeowners like the Acevedos have started trial modifications under the government's foreclosure relief program. Qualified homeowners are supposed to make trial payments for three months, but the vast majority of trials have lasted far longer, delaying both approvals and denials.

Despite pledges by banks and other mortgage servicers to reduce backlogs, 118,000 households have been in trials for at least six months. Although Treasury Department officials have said extended trials benefit people by providing temporary relief, homeowners and their advocates say long trials can hurt borrowers by increasing the amount they owe, lowering their credit scores and leaving them with less money saved in case they lose their homes.

The Acevedos say they've done everything they can to make their house payments, even wiping out their savings. Michael lost his longtime job as an exterminator in early 2009. He eventually found work, but makes less money. Concetta continues to work as a home health care aide. Their 19-year-old son works at a 7-Eleven while going to college full time.

Since April, a Richmond County court judge has presided over monthly state-mandated foreclosure settlement conferences between the Acevedos and Wells Fargo. The judge has penalized Wells Fargo for improperly denying them a final modification and not providing the written reasons for the denial as previously ordered by the court, according to Joseph Sant, their attorney from Staten Island Legal Services.

Sant said a Wells Fargo representative recently made a verbal offer to reduce the Acevedos' monthly mortgage payments by half, but they have received no written confirmation and the family remains skeptical.

"I ain't gonna believe it until I have it in my hand," Michael Acevedo said.

Wells Fargo spokesman Jason Menke said he could not comment on the Acevedos' situation because their court case is ongoing.

Prolonged trial periods can compound homeowners' problems because, as they make trial payments, the difference between the reduced and full payments builds up, creating large debts if they don't get permanent relief.

Seattle homeowner Carolyn Chaney has been making trial payments since November. Though she was current on her mortgage before asking for a modification, she now has $8,000 of accrued debt.

"We didn't know what we were getting into," says Chaney, a janitor at a university campus. "If you weren't going to help us, you didn't have to hurt us."

Bank of America spokesman Rick Simon says the bank has contacted Chaney to let her know she's been approved for a modification, and the final paperwork "should be sent in the coming days."

Typically banks add the accrued debt to the principal if the homeowner gets a modification, or demand a lump-sum payment if the modification is denied. (The Treasury Department recently said it was "concerned" (PDF) about the lump-sum payments and is considering creating a new policy to address the issue.)

One Connecticut homeowner, who asked not to be named, said she was so worried about accruing debt, she asked to make full monthly payments during the trial period. The bank said she could only make the reduced trial payment. Since October, she's accrued $425 in debt per month.

Many homeowners report that their credit scores have taken a hit, too. Servicers can use a temporary negative code (PDF) to report homeowners to credit bureaus during the three-month trial. If the trial extends beyond three months, however, servicers are required to switch to a neutral code (PDF) created last November specifically for government modifications. If servicers incorrectly continue to report homeowners in prolonged trials under the negative code, their credit scores could remain depressed by 50 points or more, said Ethan Dornhelm, an expert at FICO, which developed one of the credit-scoring systems.

Several homeowners have told ProPublica that even after being approved for permanent mortgage modifications, they haven't received their final paperwork.

Michigan homeowner Chiquita Carter received a letter from Bank of America in March saying she was approved for a permanent modification after a seven-month trial. But now, five months later, she still has not received the final paperwork and continues to make monthly trial payments. Meanwhile, she says, Bank of America sent her a notice that it planned to sell her home in a foreclosure sale.

Mortgage servicers are required to halt the foreclosure process for homeowners who are being considered for a government modification, are in an active trial period, or have been approved for a permanent modification, according to program guidelines (PDF).

After being contacted by ProPublica, the bank reviewed Carter's case and determined that someone at the bank had flagged her file with an internal computer code, erroneously halting Carter's modification process. Simon, the bank's spokesman, said the foreclosure sale will be canceled and Carter should soon be able to finalize her modification.

Have you been in a trial modification for more than three months? Please use the comments section below to discuss with other homeowners.