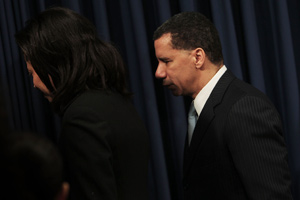 Gov. David Paterson of New York insisted this week that he wouldn't heed calls for his resignation, despite his administration's being roiled by two scandals. But no matter what he does, he is still entitled to his full pension once he retires. In fact, there is nothing any New York state employee can do that would cause them to lose a pension; not even a corruption conviction, being fired for embezzlement or a prison sentence.

A provision in the New York State Constitution, written in 1938 and approved by voters, protects pensions for state employees from being "diminished or impaired." Here's the wording:

After July first, nineteen hundred forty, membership in any pension or retirement system of the state or of a civil division thereof shall be a contractual relationship, the benefits of which shall not be diminished or impaired.

This means that politicians receive their pensions even after they become convicted felons, such as State Sens. Joseph Bruno ($8,007.11 monthly pension) and Guy Velella ($6,251 monthly pension). (Messages to the former senators have not been returned, but we'll update you if we hear from them.) Pensions are determined essentially by averaging the largest three consecutive years of an employee's salary.

The provision comes from public outcry following a 1935 case in which the court established that a pension was a "legislative gratuity," according to a 1996 article in the Temple Law Review. The provision was created to protect public employees from losing their pensions because of "political manipulation and possible collapse," according to the review article.

Harry Corbitt, the State Police superintendent who resigned this week following revelations that he knew that state troopers had visited a woman who was intending to file assault charges against one of Paterson's aides, will receive a $7,064 monthly pension from the state, according to the state comptroller's office. Even if he had been fired, it wouldn't have made a difference.

New York is not alone with its "non-forfeiture" law allowing criminals to keep state pensions, according to the National Association of State Retirement Administrators. More than half of the states have this provision, said Keith Brainard, the organization's research director. "The pension benefit is part of a compensation package," he said. "It's a form of deferred compensation. It's promised amount to pay at a later date."

In other words, state pensions in most states are considered an employee's property. Typically, a pension is considered property after five years of service, said Ron Snell, director of the state services division of the National Conference of State Legislatures. Private companies, on the other hand, sometimes have looser pension protections, Snell noted.

But there is a slow creep toward tighter pension laws that would prevent corrupt officials from cashing in, Snell said. Lawmakers have proposed two bills in Louisiana in the past few weeks, and one passed in Connecticut in 2008. Such a law in Illinois recently prevented former Gov. George Ryan, who was convicted of felony corruption in 2006, from receiving his pension.

Efforts are under way in New York, too. State Sen. Liz Krueger, a Democrat, sponsored a bill that would revoke pensions from elected officials following certain convictions. That bill, however, has yet to see a vote.