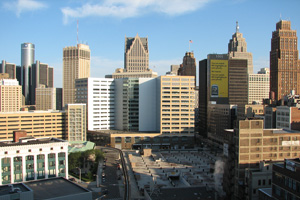 Stimulus readers, rejoice: Today's harvest of coverage is a bounty. We begin our feast in Detroit, where the Free Pressreports that stimulus-funded contracts, grants and loans in Michigan "so far have created or retained virtually no jobs." Among the article's highlights: Three of every four stimulus projects created or retained one job or less; initial job estimates from both General Motors and the city of Detroit were mistaken, and estimates from other recipients were exaggerated; and 13,555 of the 22,513 jobs reported were tied to additional money for education, and thus could be threatened when the stimulus ends. White House adviser Jared Bernstein responded that it's too early to draw conclusions about the overall impact of the stimulus.

The Washington Postreports that $23.5 billion in the House health care bill looks an awful lot like new federal stimulus spending. The money "would allow Congress to continue pumping billions in new short-term aid to states to cover Medicaid costs that have increased with rising unemployment." The Post's Aaron C. Davis describes state budget officials as "giddy" at the prospect of the new revenue. Meanwhile, Chris Whatley, of the Council of State Governments, calls the money "sugarcoating" to help states swallow the bitter pill of new Medicaid cost loads.

The Post has another good stimulus read today: a mini-profile of Steven Chalk, the Department of Energy official who manages the distribution of nearly half the DOE's $36.7 billion in stimulus money. That money goes toward home weatherization, energy efficient buildings, renewable power and electric car technology. "Our motto is spend fast, but spend well," Chalk tells the Post.

The Wall Street Journal's Elizabeth Williamson and Paul Glader describe General Electric's strategy to take advantage of stimulus money, part of a broader strategy of pursuing government money that could mean as much as $192 billion in new revenue worldwide over the next three years. (That number is disputed by an analyst at Morgan Stanley, who calls it "way too high.") For example, the pair report that one-third of the recipients of the government's $3.4 billion in grants for power-grid projects were GE customers, and that "GE expects them to use a good chunk of that money to buy its equipment." The impetus behind the drive for stimulus dollars is GE's CEO, Jeffrey Immelt, who has "pushed his managers to devise plans for capturing government money." Immelt, a registered Republican, is quoted as saying, "We're all Democrats now."

The Associated Press reports that more than 15 million taxpayers may have received too much money under the stimulus package's Making Work Pay tax credit, money they would need to repay on their tax returns. According to a report from the Treasury Department's inspector general for tax administration, the tables that determine how much to reduce the withholding taxes on paychecks did not take into account taxpayers with multiple jobs, Social Security recipients who also work, or married couples in which both partners work. In response, the Internal Revenue Service wrote that the withholding system "cannot be tailored precisely to fit every individual situation."

Finally today, in the Journal, economist Alan S. Blinder examines how the Obama administration can build on the stimulus by doing more to create jobs. He considers a tax credit, which companies could seek to exploit by gaming the system, and direct public-service employment, which would test the government's capacity to put significant numbers of new workers to use. Blinder concludes that neither option is ideal, but that given still-rising unemployment and the odds against another large stimulus package, "we will probably have to choose one of these options soon."