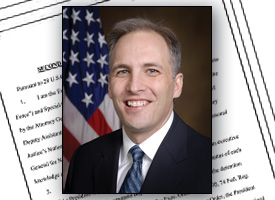 In a little-noticed brief (PDF) filed in U.S. District Court on May 13, Matthew Olsen, who is leading the Guantanamo Review Task Force that is sorting through the files of detainees, said that the review process has been painstakingly slow.

Olsen wrote that by late April, the task force database had been loaded with 1.8 million pages of information on the 240 detainees still at Guantanamo and contained a total of 400,000 unique documents, including intelligence reports from the CIA, the Pentagon’s intelligence agency, the National Security Agency and the National Counterterrorism Center.

Olsen noted that the task force had made "substantial progress" in gathering a complete response for information from each intelligence agency.

Olsen’s task force of about 65 people is divided into two teams: One is charged with identifying candidates for transfer to other countries. A second team determines which of the remaining detainees could be prosecuted in federal court or by military commissions. Recommendations are sent to a senior review panel. Detainees that do not fit into any of those categories become candidates for preventive detention. (Last month, ProPublica explored the key issues around preventive detention.)

Describing the laborious nature of the work, Olsen wrote in his court brief that "it takes approximately three to four weeks for a transfer/release team to assemble a package of approximately 6-10 recommendations for submission to the Review Panel." The panel’s deliberations vary, Olsen wrote, "depending on the complexities and circumstances of the case." Once a favorable decision is issued, "it takes additional time to implement and often depends on the outcome of diplomatic efforts."

The work of the prosecution team is more complex, Olsen wrote.

"Evaluating the potential for prosecuting these detainees involves novel and complex legal and evidentiary questions and, as a result, the prosecution teams generally take longer than the transfer/review teams to complete their recommendations."

Olsen and others have sought to reach out to a wide array of stakeholders, holding near daily meetings with legal scholars, civil rights advocates, former prosecutors, U.S. attorneys and military lawyers.

Several Obama administration officials, speaking on condition of anonymity, said the review process initially suffered from turf battles and has come up against legal constraints and limited options.

"It's been a lengthy difficult process that takes a lot of time," said one official involved. "Some agencies have greater equities than others and the dynamics have changed. The locus of power," the official said, was centered more inside the Pentagon and the intelligence community during the previous administration. "With this administration, it is more with the Justice Department."

A separate task force jointly led by the Justice Department and the Pentagon has been outlining preventive detention procedures and how they could impact future detainees including Osama bin Laden, if he is captured.

"Future captures is a huge problem," said one of the officials interviewed. The task force has a July 22 deadline to come up with proposals for preventive detention and how future captures will be handled.

Officials with knowledge of that work said it has become complicated by a federal court ruling in April to give some detainees held by the military in Bagram, Afghanistan access to U.S. courts. The administration is appealing the ruling, but officials are concerned that they may be creating a system for an expanding, rather than contracting population.

Jack Goldsmith, who briefly ran the Office of Legal Counsel during the Bush administration, said during a conference sponsored by the Brookings Institution that it was inevitable that the United States would hold "a number of detainees for decades." Goldsmith, now a professor at Harvard Law School, has advocated for the creation of a system to administer and review preventive detention.

During a Senate hearing earlier this month where Attorney General Eric Holder testified, Sen. Lindsey Graham, R-S.C., said he could see a time when some of the hundreds of detainees held in Afghanistan could be moved into a preventive detention system on U.S. soil and held for life without trial.

"We need to evaluate that population," Graham told Holder. "Some will have to be brought back in our system and we are likely to capture more with our surge of troops."

The Invisible Hand of Steve Twist