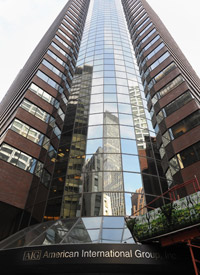 Did the bankers involved in selling one of AIG's biggest subsidiaries know about the tax issue that AIG has been keeping from potential buyers?

We wrote earlier about AIG's problem. It involves one of the firm's "crown jewels" -- the foreign life insurance companies that AIG is planning to offload to help repay taxpayers to the tune of $60 billion.

The company has known for years about a tax issue that, in a worst-case scenario, could decimate it -- but they decided to keep potential buyers in the dark about it.

We wanted to know whether they also kept it from the bankers they've hired to market the subsidiary -- called American Life Insurance Company, or Alico. The two banks involved -- Citigroup and Goldman Sachs -- both declined to comment on whether they knew of the problem before they prepared a 400-plus-page marketing document sent to possible bidders earlier this year.

They also declined to comment on whether AIG or Alico has let them know about it since.

It's important because, according to analysts, AIG will struggle to repay the $60 billion bailout loan from the Treasury unless they get a good price for Alico, and the tax problem threatens to make that a more difficult task.