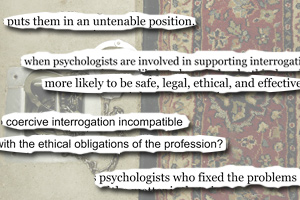 Earlier this week we published a story examining the psychology profession's tortured relationship with the Bush administration's War on Terror. We found that psychologists warned officials as early as 2002 against using potentially ineffective and dangerous interrogation techniques on detainees, according to a recently released Senate Armed Services Committee report. However, what had been little noticed was that the same psychologists helped develop the harsh interrogation policies and practices they warned against.

As part of our report, we posted a listserv of internal e-mails between staff of the American Psychological Association and members of its "Psychological Ethics and National Security" task force. (Here’s the entire listserv.) That listserv offers a rare look into a process that led to the adoption of an influential and controversial policy for the world's largest professional organization of psychologists, which represents the profession of psychology in the United States. It also provides a window into a heated discussion among medical professionals grappling with their ethical obligations and their possible complicity in torture.

The task force was set up after news reports suggested that psychologists and other health professionals had been complicit with abuse of detainees in Iraq, Afghanistan and Guantanamo Bay, for example by sharing information about psychological vulnerabilities with interrogators. The group's charge was to examine the ethical dimensions of psychologists' involvement in "national security investigations" and consider whether the APA should develop policies to guide psychologists involved in those activities. The task force produced a 12-page report stating that the APA's ethics code prohibited torture, obligated psychologists to report any instances to appropriate authorities, and banned psychologists from using health care information in ways that could harm detainees.

But the report also gave psychologists an ethical blessing to continue consulting in national security-related interrogations. An organization of psychiatrists, in contrast, decided its physician members should not participate. In response, the Department of Defense changed its guidance to state that psychologists, but no longer psychiatrists, should participate in so-called Behavioral Science Consultation Teams or "BSCTs" (pronounced "biscuits"), which assist interrogators in prisons in Iraq, Afghanistan and in Guantanamo Bay, Cuba.

After the report was issued, the APA task force itself became a target for criticism, when it was revealed that some members had consulted on interrogations at Guantanamo and Abu Ghraib, trained other psychologists to do so, or worked within chains of command that authorized the very practices the task force was established to consider (six of the nine voting members were members of or had consulted for the military or intelligence agencies).

The e-mail traffic on the APA task force listserv forms a dense but riveting narrative. Task-force member Mike Gelles, then-chief psychologist for the Naval Criminal Investigative Service, who had opposed plans for the abusive interrogation of Mohammed al-Khatani, kicked off the substantive discussion on April 23, 2005, the day after the listserv was created. He forwarded a message he had written to APA ethics head Stephen Behnke.

"DOD [the Department of Defense] is trying to update current policy on interrogation," Gelles wrote. "I think based on the GTMO [Guantanamo Bay] experience putting mental [h]ealth care professionals in the role of having to consult on interrogations when their training and role is to treat patients puts them in an untenable position."

Col. Louie M. Banks, also a task-force member, pointed out that psychologists who support interrogations do not provide mental health care to detainees, "thereby preventing 'doubling' of their roles." Banks was the leading psychologist for the Army's Special Operations Command as well as the "Survival, Evasion, Resistance, Escape" (SERE) program.

SERE exposes U.S. soldiers to a controlled program of harsh treatment in order to help them develop the ability to resist interrogations if they are captured by enemies that torture. SERE techniques, including waterboarding, were famously "reverse-engineered" and used by U.S. personnel during interrogations on detainees in the Bush administration's Global War on Terror, a process Salon and other publications showed was led by psychologists.

"It is my opinion that when psychologists are involved in supporting interrogation and detainee operations, these operations are much more likely to be safe, legal, ethical, and effective," Banks, who was in charge of training and overseeing BSCT psychologists, wrote on May 19, 2005. "I am very confident that my psychologists provide a very effective safety mechanism during these operations. I also believe that we provide a significant assist in making the process more productive, based on our knowledge of human behavior."

Three days later, Jean Maria Arrigo, a specialist in the ethics of intelligence gathering, posed what seemed like a central question. "Should the APA declare the contribution of psychologists to coercive interrogation incompatible with the ethical obligations of the profession?" she asked. Those ethics include "beneficence" and "nonmaleficence" – the duty to bring benefit to patients and not to harm them.

None of Arrigo's fellow task-force members wrote back to say yes. Some took issue with the question itself. "This question is worded in the affirmative that DOD/Military psychologists have done something illegal, morally wrong and/or unethical," Col. Larry James, who had worked as a BSCT in Guantanamo and Abu Ghraib, wrote on May 23. "Like Morgan Banks, I am very proud of the fact, it was psychologists who fixed the problems and not caused it."

The 10-member task force met in Washington, D.C., from June 24-26, 2005, two months after the listserv was initiated, and parted in apparent harmony. "I hope to continue our friendship and collaboration," Banks wrote the day the meeting ended. The task-force report was drafted quickly by ethics head Behnke, presented to the APA board the day after the meeting, and adopted as official APA policy with only minor changes. The 11-page report reaffirmed the APA's position that there was no role for psychologists to be involved in "torture or other cruel, inhuman, or degrading treatment," but that it was "consistent with the APA Ethics Code for psychologists to serve in consultative roles to interrogation and information-gathering processes for national security-related purposes."

That led to an unexpected flood of public criticism. "APA members who have been in touch with me have expressed major disappointment," task-force member Nina Thomas, a psychoanalyst who had worked with war victims, wrote on July 8, 2005. She shared excerpts of an e-mail from another listserv that criticized the task-force report for offering psychologists "much wiggle room" to "do whatever they see as indicated by concerns of national security."

Tensions rose. "I do not think that we should now begin to second-guess ourselves," Olivia Moorehead-Slaughter, the task-force chairperson, wrote on July 9, 2005.

A July 28, 2005, New York Times article showing that lawyers had stood up against harsh interrogation techniques led Thomas to lament, "reading it made me all the more sad that Mike Wessells, Jean Maria and I were not more successful at arguing our case for a more stringent standard for holding psychologists to account."

Moorehead-Slaughter reminded her colleagues the group had discussed including human rights standards in their report, but had concluded that "including such standards in the document would likely (perhaps definitely) put the document at odds with United States law and military regulations," she wrote on July 29, 2005. "[T]he military would simply have ignored the document – thus, the community that we would most want to reach would have been prevented from using the report."

Thomas wrote back to disagree. "(I)t has been the military's own lawyers, indeed their highest ranking lawyers who have argued for the importance of using international human rights standards as the benchmark."

Koocher, the incoming APA president, supported the task force's decision to leave international standards out of their document. "I have zero interest in entangling APA with the nebulous, toothless, contradictory, and obfuscatory treaties that comprise 'international law,'" he wrote on July 30. "Rather, I prefer to see APA take principled stands on policy issued where psychology has some scientific basis for doing so."

The U.S. military apparently appreciated the report. Banks wrote on August 12 to say that he, James and another psychologist had found it "a solid anchor" in an eight-hour meeting with the Army's surgeon general that hammered out "the doctrinal guidelines and training model for psychologists" who support interrogations.

In January 2006, Moorehead-Slaughter discussed the group's next assignment from the APA, the preparation of a book of case examples and commentary to demonstrate how the report's statements should be applied.

Jean Maria Arrigo thought that the cases would reveal that the pressures of the prison environment rather than a psychologist's own moral principles would govern his or her actions during interrogations. "I think the model of the morally autonomous psychologist in the U.S. detention center ... will fade as soon as realistic cases are examined," she wrote on February 12, 2006.

"I must confess that I do not know what 'morally autonomous' means," task-force member Capt. Bryce LeFever, a Navy special forces psychologist who had consulted on interrogation techniques in Afghanistan in 2002, replied.

"Moral behavior is never 'autonomous.' It is always connected to the community," LeFever countered. "If there were, in the immediate environment, pressures on me to behave contrary to my sworn codes – I can do my utmost to resist those and behave morally. This takes courage. Some call it moral courage."

The prospect that the group would be able to produce a casebook began to look unlikely. "All of my examples and commentary are classified, and cannot be shared outside of the DoD community," Banks wrote on January 25, 2006.

The beginning of the end of the listserv was signaled by a message from Mike Wessels, a task-force member who specialized in the psychological effects of armed conflict on children, on January 15, 2006. "Out of ethical concerns, I have decided to step down from the PENS Task Force because continuing work with the Task Force tacitly legitimates the wider silence and inaction of the APA on the crucial issues at hand," Wessels wrote. He had hoped for "a ringing condemnation of psychologists' participation not only in torture but in all forms of cruel, inhumane and degrading treatment of detainees, including the use or support of tactics such as sleep deprivation."

In February, Koocher, the new APA president, announced that the task force had ceased to exist when he took office on January 1. This made Wessels' resignation moot. Shortly thereafter, the listserv went silent.

Our previous coverage on U.S. medical personnel and interrogation programs:

Tortured Profession: Psychologists Warned of Abusive Interrogations, Then Helped Craft Them - May 5, 2009