A scandal rocking an Iowa town of barely 250 has ballooned into a statewide story. But it has national implications.

Last month, FBI agents, social services and health department officials in Iowa converged on a 106-year-old bunkhouse. It’s where dozens of mentally retarded men lived when they were not working for as little as 37 cents per hour gutting turkeys in a processing plant, according to news reports and documents released by state officials.

Some of the men had been working at the plant and living at the company-owned bunkhouse since the 1970s. The arrangement grew out of a Depression-era federal law that allows employers to pay disabled workers less than the minimum wage. Roughly 400,000 workers are currently covered by the law.

The 21 men in question are Texans who work for a company called Henry’s Turkey Service. According to reports in the Des Moines Register, Henry’s took advantage of a section of the labor law that allows the company to pay lower than minimum wage to disabled workers – and to deduct their living expenses from their pay.

Henry’s, a Texas company, in the 1970s started taking the deinstitutionalized men to Iowa, where they worked at a plant owned by West Liberty Foods, one of the nation’s largest turkey processors.

West Liberty released a statement to the Register saying it had an "agreement" with the turkey service and played no role in housing the men or paying their wages. Turkey service owner Kenneth J. Henry declined to comment but referred ProPublica to his attorney.

The men were treated well and the bunkhouse was comfortable, Iowa attorney David Scieszinski said. Further, he said the furor over the men’s situation is simply "politics" on the part of legislators who have never set foot in the bunkhouse. 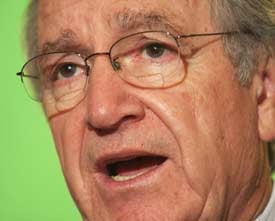 "Needless to say, the abuses exposed at Atalissa shock the conscience," Harkin said during the hearing.

The provision was well-intended: It would give companies an incentive to give disabled people a vocation and sense of life’s worth.

But since the waning days of the Great Depression, the law has been widely abused, according to a 2005 investigation by the Oregonian, which revealed companies enriching themselves at the expense of poorly paid, high-functioning workers.

Last week’s hearing focused on oversight of the law. It’s up to for-profit employers, like Henry’s Turkey Service, to submit an annual application to the Labor Department justifying their practice of paying workers low wages, describing workers’ productivity and abilities.

John McKeon, a department enforcement official, testified that three employees in Chicago each review about 800 applications each year.

More than 700 Labor Department investigators inspect the work sites around the country. Investigators are also charged with checking that companies only deduct the fair cost of room and board from workers’ checks.

McKeon said the department is low on resources – in 1975 the wage and hour division fielded twice the number of inspectors. And, he said, its clout to penalize employers who exploit workers has diminished as the number of attorneys who work on behalf of the department has waned.

McKeon did not speak about Henry’s Turkey Service specifically and spokespeople have declined to comment to the press.

The arrangement, it turns out, had been exposed long before. The federal Labor Department was aware of the payment arrangement as early as 1999.

A Labor Department inspector general's report (page 20) shows that department staffers knew that in 1998, Henry’s Turkey Service claimed to pay about 50 men $5.65 an hour, but after deducting rent and board, ultimately gave them each $60 per month.

The company’s justification? It had to keep $60,000 that year to recoup the cost of renovations to the men’s bunkhouse that had been completed in the 1970s.

Last month an Iowa fire marshal noted the profusion of space heaters in the building and declared it unfit for habitation. Iowa social services officials moved the men from the home.

The story has also peeled back a page in Iowa history. As early as 1974, a social services worker in Iowa called the program "obscene."

"Once a resident becomes an employee of Henry’s Turkey Service, he...loses most basic human rights," social worker Ed George wrote in a memo released Feb. 24 by the Iowa Department of Human Services.

In 1997, the county social department fielded complaints that the men had sustained bruises and unhealed fractures. But officials failed to act, with one official noting in an e-mail that he didn’t want Muscatine County to be left "holding the bag" for Texas’ residents.

Scieszinski said that each time officials looked into Henry’s Turkey Service, the company asked if there was anything it could do and was consistently told "no."