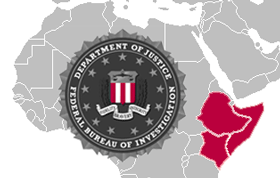 The American Civil Liberties Union has filed a lawsuit against the Federal Bureau of Investigation, saying it illegally detained and mistreated an American, Amir Meshal, who was held in Kenya, Somalia and Ethopia for four months in 2007 before being released.

According to the ACLU’s complaint, which was filed in district court in Washington this afternoon, Meshal, who is now 26, traveled to Mogadishu, the Somalian capital, in 2006, to study Islam. In January 2007, he fled Somalia after fighting flared up in the country’s long-run­­ning civil war. He was arrested in Kenya by a joint U.S.-Kenyan-Ethiopian operation, the complaint alleges, then was transferred first to Somalia and later to Ethiopia. The lawsuit said he was interrogated more than 30 times by U.S. officials, including two FBI agents, who threatened him with torture and execution and denied him access to an attorney. Meshal, of Tinton Falls, N.J., was released that May and returned to the United States.

The complaint alleges that Meshal’s detention and treatment "was at the direction or behest of U.S. officials, or carried out with their active and substantial participation." The ACLU identifies two FBI agents by name, as well as two unknown employees of the U.S. government.

Jonathan Hafetz, an ACLU lawyer representing Meshal, said this is the first case of a U.S. citizen being the subject of rendition – held without charge by the U.S. government and transferred to a foreign country. Asked why Meshal is filing suit now, more than two years after being released, Hafetz said his client came to the decision "after living with this for a while." He added that Meshal "wanted some accountability for what happened. If it can happen to him it can happen to others."

While U.S. officials have previously said that FBI agents questioned Meshal while he was detained in Africa, the State Department said at the time that the U.S. government had no role in his deportation from Kenya to Ethiopia and had protested to the Kenyans.

The FBI did not immediately respond to a request for comment about today’s complaint. We’ll include its response if we hear back.