President Obama signed the Dodd-Frank financial reform law in July 2010, hailing it as an overhaul to prevent the kind of crisis that hit the world economy in 2008 and one of the signature achievements of his first term. Almost three years later, much of the big stuff the law calls for is on hold, under legal and legislative assault, or still working its way through the regulatory intestines. According to a law firm that tracks the legislation, only 38 percent of the 398 Dodd-Frank rules have been imposed, while regulators haven't yet publicly put forward versions of almost a third of them. 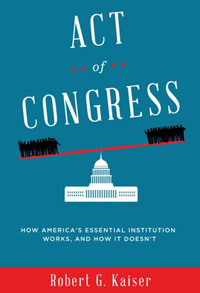 Is this the face of success? A new book, "Act of Congress," by Robert Kaiser, an associate editor and senior correspondent for The Washington Post, gives that question a qualified yes. "The story of Dodd-Frank does demonstrate that Congress still canwork," he writes, "and it shows how, but only in extreme circumstances."

To a Beltway expert such as Kaiser, that a dysfunctional and hyperpartisan Congress passed such a sweeping bill constitutes a small miracle. He concludes that "the big banks and Wall Street institutions never gave up trying to shape the bill to serve their interests, but that they had little success." As former Massachusetts Congressman Barney Frank, whose name is on the bill, says: "Money is influential [in Congress], but votes will kick money's ass any time they come up against each other. . . . Public opinion drove that bill." At another point, Frank declares, "The big banks got nothing."

Kaiser's account reminds you of those fairy tales that end with the wedding and don't follow up to see how the prince and princess's married life turns out. "Act of Congress" doesn't cover what happened after the law's enactment. In large part because of the ongoing, messy aftermath, many students of finance don't see Dodd-Frank as much of a triumph at all. In the wake of this generation's worst global financial and economic crisis, Congress passed the bare minimum of what was necessary. Dodd-Frank did not restructure the financial industry. It did not remake the financial regulatory architecture. Instead, the law tinkered around the edges, increasing regulation for this, expanding the power for that. Congress left much of the toil to financial regulators with limited resources. Troublingly, this has given the banks another opportunity, out of the public eye, to wrest exemptions that emasculate the rules.

Kaiser's book is roughly divided into two parts. The first covers how the House version of the law, shepherded by Frank, came to be; the second half covers the work of then-Sen. Christopher Dodd of Connecticut in his chamber. The legislation is both men's capstone achievement, and both left Congress after it was passed.

The author has delivered a blow-by-blow account of the tawdry compromises, Republican intractability and factional fighting within the Democratic Party that went into making the law. Congress comes across as the nation's grandfather: antiquated, inconsistent, as slow-moving as it is dull-witted. The book is in part an elegy for the Congress — particularly the Senate — of yore, the Senate of Dodd's father, Thomas J. Dodd.

Kaiser repeatedly characterizes today's Congress as "dysfunctional." But he doesn't demonstrate that so much as he shows Republican obstructionism. The Democrats — Frank, Dodd and their staffs — repeatedly seek compromise with the other party. Dodd gives significant ground without ever having a true negotiating partner. Instead, he has Sen.Richard Shelby of Alabama, the ranking Republican on the Senate Banking Committee. Kaiser gives us a damning portrait of Shelby's evolution from a reasonable, though conservative, voice for a certain level of banking regulation into a partisan hack and the cat's paw of his extreme staffers. Shelby repeatedly flirts with working on the bill and then capriciously withdraws, unfairly denounces Dodd for not working in bipartisan fashion and assails the bill with inaccurate attacks.

And when the bill emerges from committee, Sen. Mitch McConnell of Kentucky, the Republican leader, moves to filibuster it, giving up only when some Republicans defect.

This isn't dysfunction so much as a demonstration of the Republican leadership's lack of interest in doing anything about a reckless and out-of-control financial system that gave the country such a terrible global crisis. More broadly, Kaiser's account once again shows how unserious the modern Republican Party is about policy, how beholden to special interests it is and how determined to not give any victories to the Democrats and a president it views as illegitimate.

With its focus on Congress, Kaiser's account underplays the work of financial industry lobbyists and the White House. Kaiser does point out that the financial industry employed 2,700 lobbyists (including 1,447 former government employees) to work against reform in 2009 and 2010, spending more than $750 million. By contrast, groups advocating reform to the system spent a paltry $5 million. But the author doesn't show us much actual lobbying. And given the modesty of the eventual law and the myriad delays in implementation, Frank's crowing that the banks got nothing for all of this dough rings false.

Obama White House officials, especially then-Treasury Secretary Timothy Geithner, play only bit parts in Kaiser's book. The White House created the template for the House version of the bill, which was "generally cautious," he writes. But then throughout the many months of negotiations, White House officials made only rare appearances. When the law was finally enacted, Dodd was angry that the Obama administration took so much credit. But since Kaiser hasn't focused much attention on the White House's contribution, it's hard to evaluate who has the better claim. According to other reports, Geithner and his staff played a large role, often working to blunt more radical reforms. In one case, the Treasury secretary personally lobbied against the Brown-Kaufman amendment, a truly transformative and dramatic proposal that would have set high capital requirements on banks and put limits on their size.

Frank is the star of this book. The congressman lives up to his reputation as brilliant and witty. But he is also a flawed boss who leaves to his staff the difficult job of bringing less brilliant colleagues around to his way of thinking. Dodd isn't nearly as interesting a character. If Dodd has a core ideology or set of principles, Kaiser didn't find them. Instead, Dodd wants to get something, anything, done — and it's important for that something to be bipartisan.

Kaiser enjoys pointing out the intellectual limitations of our nation's politicians, and we enjoy reading about them. At one point, Rep. Jeb Hensarling, a Republican from Texas, attacks what he thinks is a taxpayer-funded bank bailout fund. He likens it to his college fund, which he and his wife have "because we intend to send our children to college." The author writes slyly, "This bit of rhetorical wizardry seemed to please Hensarling." Like many Republican charges about Dodd-Frank, Hensarling's comparison was erroneous. The banks, not taxpayers, were going to pay for the fund. But his objection also made no sense. The fund was more like insurance. Buying fire insurance doesn't mean you are counting on your house to burn down.

By contrast, Frank understood the complexities of financial regulation. But perhaps being smart in this context wasn't such a good thing. Smart legislative and regulatory solutions may embrace flexibility and exemptions that banks can later exploit. Regulations that create clear, bright lines may seem simplistic and dumb. But such rules tie regulators' hands, freeing them from banking influence.

Dodd-Frank may have been too smart for its own good.