A version of this story was published in USA Today.

The Obama administration has changed the nation's immigration enforcement strategy in ways that will reduce the threat of deportation for millions of undocumented immigrants and will likely blunt the impact of any state laws designed to deport vast numbers of people.

The changes are the little-discussed byproducts of the administration's well-publicized decision to focus its deportation efforts on immigrants who have committed serious crimes.

To remove the "worst of the worst," the administration reasons, it can't allow the nation's immigration courts and detention centers to remain clogged with generally law-abiding immigrants who have lived in the country for a long time and probably would be legalized under comprehensive immigration reform legislation.

The administration's strategy has been revealed in recent months through internal memos, testimony and new guidelines that direct deportation officers to generally refrain from deporting certain groups of immigrants.

The president doesn't need congressional approval to make any of these changes because the executive branch has wide leeway in how it administers the laws Congress writes.

But the administration's new direction puts it on a collision course with those who believe the nation's immigration laws should be strictly enforced and that all illegal immigrants should be deported.

Rep. Steve King, R-Iowa, the top Republican on the House immigration subcommittee, said that by making exceptions, ICE is "thumbing its nose at the law." And the union representing ICE's 7,000 enforcement officers has issued a unanimous no-confidence vote that singled out Morton and an assistant, saying their new detention and removal policies were "misguided and reckless initiatives, which could ultimately put many Americans at risk."

"Everything is being driven away from arresting people just for being here illegally or low-level criminals," said a supervisory ICE agent who asked not to be identified for fear of reprisals from his superiors. "They're using 'cost savings' and the 'worst of the worst' as their justification. But to me and those inside, it's all politics. They want us to stay away from the illegals who are living and working here and not committing serious crimes until such time as they can get immigration reform passed."

The changes have also drawn complaints from immigration advocates, who say deportations under Obama have reached record highs and that the immigrants who remain behind are still living in limbo, without work permits, Social Security cards or driver's licenses.

"This isn't a free ticket," said Raed Gonzalez, one of the Houston-area attorneys whose clients' cases were dropped last month. "This is termination without prejudice, which means that the government can put them back into proceedings at any time."

People close to the administration acknowledge that the new strategy doesn't please activists on either side of the immigration debate. But they say it's the best Obama can do without immigration reform legislation from Congress.

In an interview with ProPublica, Morton, the ICE director, said the administration's strategy will lead to smarter enforcement, not softer enforcement. Given that there are now more than 10 million people in the country illegally and that a record amount of money is being spent on immigration enforcement in an era of unprecedented budget deficits, he said it makes sense to target people who pose the biggest threat to public safety or national security.

Deportations have increased dramatically in recent years, from 189,000 in 2001 to 387,000 in 2009. Much of that increase has been accomplished by doing what the administration is now trying to avoid: deporting large numbers of people who haven't committed serious crimes.

This year, however, that trend has taken a sharp turn, according to a report released in July by TRAC, a Syracuse University program that gathers and analyzes government data. While more than half of the people being held for deportation haven't committed crimes, the percentage of those who have rose from 27 percent to 43 percent this year.

The administration's new strategy -- including many of its key points and phrases -- echoes a February 2009 report (PDF) by the Migration Policy Institute, a nonprofit research center, which produced it in hopes that the administration might use it as a blueprint for its enforcement strategy.

"What they've done is what any good law enforcement agency does," said Donald Kerwin, who co-authored the 2009 report with Doris Meissner, head of the Immigration and Naturalization Service under President Bill Clinton. "They can always jack up the numbers but does it have any impact? And the answer is no, it doesn't."

Trying to Unclog the Immigration Courts

Deportations have doubled in the past decade in part because Congress has steadily increased the removals budget, from $1.2 billion to $2.5 billion in the last five years alone. But the numbers also have been boosted by two ICE programs -- 287(g) and Secure Communities -- which use local police to help identify and detain more undocumented immigrants than ICE agents could ever pick up by themselves. Twenty-two states are now considering laws that would require their police to become involved in immigration enforcement.

The two programs have been so successful that the nation's immigration courts had a record backlog of 248,000 cases earlier this year, according to another TRAC report. Immigrants now wait an average of 459 days for their cases to be heard, with the average rising to 643 days in California. Most of the immigrants are released pending their hearings -- including some who are a threat to public safety -- because it is too costly for the government to hold them for such long periods. 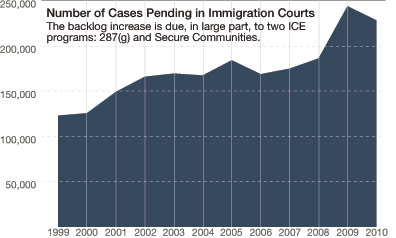 The 287(g) program, named for the section of the immigration law that created it, permits state and local police, with training and supervision from ICE, to access ICE databases and decide whether someone they've stopped or taken to jail on other charges should be referred to ICE for deportation.

Seventy-one jurisdictions in 26 states now have 287(g) agreements with ICE, and about 40 more are pending, according to ICE spokesman Richard Rocha. Although the program was enacted in 1996, the first agreements didn't come until 2002 and only in the last three years has the program begun to spread.

Authorities in jurisdictions that use 287(g) praise its effectiveness.

"We've seen a lot of success with it," said Stacey Bourbonnais, a spokeswoman for the Gwinnett County, Ga., Sheriff's Department. During the first half of this fiscal year, Gwinnett County helped ICE put 1,500 immigrants into deportation proceedings.

But immigrant rights groups complain that 287(g) encourages ethnic profiling and targets people who have committed traffic violations and other minor crimes. Last year, ICE responded to those complaints by rewriting the 287(g) agreements to specify that the program is intended to target criminal undocumented immigrants. But the complaints have persisted and the Department of Homeland Security, ICE's parent agency, is now reviewing the program.

An official familiar with the ongoing review predicted it will lead the administration to shut down the program. If it does, it would be a victory for immigrant rights groups and a blow to state and local law enforcement agencies that have chosen to participate.

The second program, Secure Communities, operates in 574 jurisdictions in 30 states, and ICE hopes to make it available to jurisdictions nationwide by 2013. Like 287(g), it allows local officers to tap into ICE databases.

The administration says that focusing on "the worst of the worst" is vital to ICE's primary mission of national security and public safety and can work only if the pipeline out of the country isn't clogged, as it is now, with people who aren't a significant danger

But King, the Iowa Republican, says the Obama administration had another choice when it came to unclogging the system: It "should have come to Congress and asked for more judges, more prison beds and more prosecutors" so the courts could quickly process all the undocumented immigrants they received. The goal, King said, is to remove everybody deportable under the law.

Some experts say that deporting all 10 million people living in the United States illegally, if that were possible at all, would take 20 years and more than $50 billion in taxpayer money. But King, who is likely to become chair of the immigration subcommittee if Republicans gain control of the House in January, is undaunted.

"If that were the formula that got us to the point where we'd re-established the rule of law, I would support that," he said. "I think that's going to be about $8 (annually) a person for every American. I think that's a pretty cheap price to pay to reestablish the rule of law."