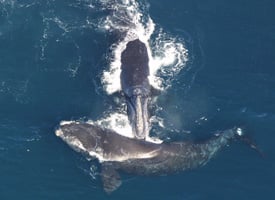 The Bush administration has not been shy in questioning the conclusions of government scientists. Years-long rulemaking processes have been shunted by White House questions and objections, reports and congressional testimony heavily edited, and in some cases troublesome scientists entirely removed from areas of responsibility. In one survey, nearly half of EPA scientists who responded complained of political interference.

Here is another episode. Yesterday, the National Marine Fisheries Service issued new proposed guidelines for the protection of North Atlantic right whales. According to the new rules, ships will have to slow to 10 nautical miles per hour within 23 miles of certain ports at certain times of year. While a significant measure to protect the whales, of which only about 300 remain, prior guidelines had extended the protected zone to about 34.5 miles from shore.

The reason for the restriction was pretty straightforward: fast moving ships had killed about 20 whales in the past 20 years, government scientists found (PDF). The whales, in fact, earned the name "right whales" because they were such an easy quarry for whalers.

For four years, government scientists studied right whale deaths in order to develop rules to protect them. But when they finally presented the White House with a proposed rule in 2007, they found the administration unimpressed. According (PDF) to correspondence produced by House oversight committee Chair Henry Waxman (D-CA), the vice president's office in particular had been a particularly harsh critic, complaining that scientists had no "hard data" to support the guidelines. Officials in the White House Council of Economic Advisors had apparently crunched their own numbers on right whale collisions, and their conclusions jibed with those reached by the shipping industry (PDF).

Agency scientists responded that their findings were clear and reliable. But with a nod to the shipping industry, the new rules propose a scaled back protection area. A spokesman for the National Oceanic and Atmospheric Administration, the parent agency for the fisheries service, told the Washington Post that "time is money in shipping" and that the agency had sought to address "a concern about the increased cost to carriers" by reducing the speed zones.

There's no indication as yet whether the White House is satisfied with the compromise. The shipping industry is not, still objecting to the speed limit.