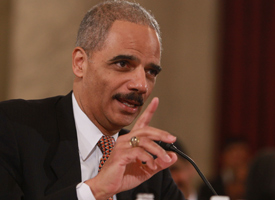 Last week, we published the first comprehensive list of the Bush administration's still-secret legal memos on torture, detention and warrantless wiretapping. There are far more secret memos than had been previously understood.

When we asked a Department of Justice spokesperson when or whether the memos will be released, he declined to comment. (Most of the memos were authored by DOJ's Office of Legal Counsel, whose decisions are binding for the executive branch.)

But as the Federation of American Scientists' Steven Aftergood noticed earlier today, attorney general nominee Eric Holder said in a written response to questions from Sen. Russ Feingold that change may be coming:

"Once the new Assistant Attorney General in charge of the Office of Legal Counsel is confirmed, I plan to instruct that official to review the OLC's policies relating to publication of its opinions with the [objective] of making its opinions available to the maximum extent consistent with sound practice and competing concerns."

Holder is expected to be confirmed by the Senate today. Meanwhile, a spokeswoman for the Senate Judiciary Committee told us that the confirmation hearing for new OLC boss Dawn Johnsen hasn't been scheduled yet.