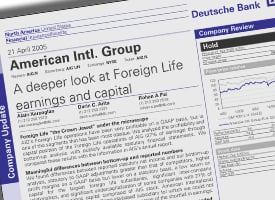 Four years ago, Alain Karaoglan thought AIG was an overvalued and murky company with a seriously flawed business structure. And he said so in a controversial report published with two fellow analysts at Deutsche Bank.

Today, Karaoglan starts a new job: as a senior vice president at the company he panned, responsible for selling off AIG assets in the hope of repaying billions the company owes U.S. taxpayers.

AIG declined to make Karaoglan available for an interview. After AIG's collapse last fall, we tried for months to contact him about the 2005 report he wrote while he was a managing director of equity research at Deutsche Bank. He never returned our calls.

They concluded there was a substantial gap between what AIG told the Securities and Exchange Commission it had earned from its life insurance business as a whole, and what the individual life insurance subsidiaries reported separately to state and overseas regulators. The figures should be the same because the SEC filings consolidate earnings for all of AIG's subsidiaries, Karaoglan's team reasoned. But they found a 54 percent gap in 2002 and a 25 percent gap in 2003.

In other words, AIG's earnings seemed to be far higher than the sum of its parts, according to Karaoglan's analysis. The team couldn't find an explanation for the discrepancy, and AIG did not provide Karaoglan with one.

The report also raised questions about AIG's creditworthiness. Credit ratings of the subsidiaries were boosted by guarantees from the parent company, the authors found. But the parent company was "just a holding company, and its strength and only source of cash flow to bondholders and shareholders comes from its subsidiaries."

As such, "both the credit ratings and perception of capital strength of AIG may have been based on circular thinking," the Deutsche Bank team wrote.

AIG didn't do much to clear things up, according to the report. The company said it could not provide financial statements for foreign life subsidiaries other than the largest one, the American Life Insurance Company. Karaoglan's team was unable to get any details on a subsidiary in Bermuda, which in turn owned a number of smaller subsidiaries. AIG had "not discussed that subsidiary in the annual report beyond being shown in the organizational chart."

Based on the report, Deutsche Bank lowered its target price for AIG by 14 percent to $54 a share. AIG was invited to respond to the analysis in its next SEC filing, but the company never did. AIG's stock price crashed last fall and has recently been trading at less than $2 a share.

Asked why AIG hired a one-time nonbeliever for such a critical position, spokeswoman Christina Pretto said the firm's management team is "committed to transparency and appreciates independent thinking -- adhering to the philosophy that your strongest critics may be your best advisers."

Following AIG's collapse, the Federal Reserve Bank and the Treasury committed up to $170 billion in financial aid to the company. By selling off assets, AIG hopes to repay those funds. The company's annual meeting is tomorrow.