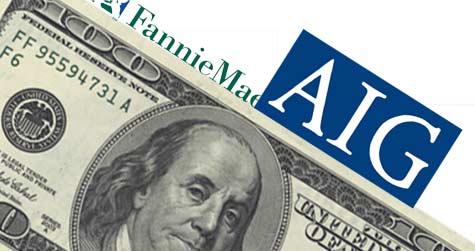 AIG is coming close to losing its crown as the biggest debtor in the bailout. The company announced today that it has completed two deals that, together, shaved $25 billion off its tab to the Federal Reserve Bank of New York (PDF), bringing the combined total it owes the Fed and the Treasury to about $62 billion. That's only about $2 billion more than what Fannie Mae, the company that's received the biggest government bailout next to AIG, still owes taxpayers.

Fannie has said that it expects its bailout total to continue to mount, as it takes losses from the slumping housing market and its role in the administration's loan modification program.

AIG has shifted two of its prized subsidiaries – ALICO and AIA – into new arrangements, called special purpose vehicles. The move will eventually take the subsidiaries off AIG’s books. The Fed wrote down the $25 billion in exchange for a stake in both new vehicles. The idea is to prep the subsidiaries to be sold off, or to go through public offerings on the stock market.

We mentioned these deals a few months ago when we explained what AIG really owes taxpayers – and it’s not the $180 billion figure that gets bandied about. That was the maximum offered by the government to save AIG, but the government never actually used more than $134 billion. Of that, $43.5 billion came from the Fed to buy up mortgage-related investments that were tanking at the time. Those instruments still have value: Some are trading a little below what the Fed paid for them; some are trading substantially above book value. Like this new investment in the two subsidiaries, it’s a large exposure. In the end, though, the Fed could make money on these deals. Either way, that's no longer AIG's problem, it's the Fed's.

That’s not to understate the company’s problems. AIG still owes the Fed $17 billion in loans, and the Treasury would like to recoup the $40 billion it spent buying up preferred stock. There’s also $5.3 billion in Treasury loans, according to company filings.

There is still disagreement over whether AIG will ever repay the whole bailout – $62 billion is still a formidable debt – but it has cut its debt by over half since the height of its woes.

After showing a record-breaking loss in March this year, AIG recently announced a modest return to profitability.