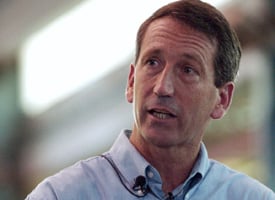 The urgent court battle over South Carolina Gov. Mark Sanford's desire to dictate the spending of, or refuse to accept, $700 million in stimulus money will have to wait until next week. South Carolina's Supreme Court was supposed to hear arguments today in a case brought against the state by two students asking that the $700 million be spent on education, which is how the state legislature budgeted it. But late yesterday, Sanford asked a U.S. District Court to consider the case, so now a federal judge will decide Monday whether the case belongs in state or federal court.

Sanford has insisted that he will not accept the money unless some of it can be spent to pay down state debt. At the crux of the case is the "Clyburn workaround amendment," a provision in the stimulus bill advocated by Rep. James Clyburn (D-SC) that allows state legislatures to bypass a governor to appropriate stimulus money. Delaying the case pushes South Carolina closer to the federal July 1 deadline to request money, at which point the $700 million might turn into a proverbial pumpkin. Sanford has said that he does not consider the deadline firm, but U.S. Education Department spokesman John White told the AP that "the deadline is what it is."

In Monday's hearing, a federal judge may decide to consolidate the lawsuit with two other stimulus cases: one brought against Sanford and Jim Rex, the state superintendent, by the South Carolina Association of School Administrators, seeking to compel them to spend the stimulus money on education; and a lawsuit filed by Sanford against his own attorney general alleging that the state legislature violated the South Carolina Constitution by trying to force Sanford to take the stimulus money.