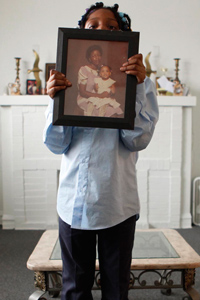 Tameka Williams, 27, lay on a gurney in the grips of schizophrenia, gently thumping her fist against her forehead as she waited to be admitted to Riveredge Hospital.

In just over a week, Williams and her 8-week-old fetus would be dead. Riveredge Hospital did not report the Aug. 10, 2007 death to state regulators, noting that Williams died in an emergency room an hour after she collapsed at the psychiatric hospital.

State regulators, however, say Riveredge was bound by state law to report the death. The Illinois Department of Public Health only learned of Williams a year later after an employee lodged an anonymous complaint.

The state concedes that it erred when it issued no citation for the hospital's silence.

Tameka Williams' death raises questions not only about state oversight, but also about care at the embattled hospital, which in three days gave Williams 10 doses of a drug that is so risky that the FDA has issued five "black box" warnings about its effects.

Just one day before regulators converged on the hospital to look into the complaint, the chief executive of the corporation that owns Riveredge Hospital told a group of investment analysts that the company is transparent with its overseers.

"As a matter of fact at all [of our] facilities we thoroughly report incidents to relevant agencies as soon as possible," Joey Jacobs, chief executive of Tennessee-based Psychiatric Solutions, said on Aug. 4, 2008.

The hospital released a statement in response to questions about the death, noting that Riveredge and Loyola University Medical Center, where Williams died, "did everything they could to save her."

"Sadly," the statement says, "her death was unavoidable."

"They weren't even looking after her," Carlina Williams said in her West Side apartment. "What can I do?"

State public health investigators found several lapses in Williams' care (PDF), some involving an antipsychotic drug that has not been evaluated for pregnant patients.

While hospital records state that a physician described to her the benefits of clozapine, the antipsychotic drug she was given, Williams' signature is not on the patient consent form.

The drug's warning literature states that patients taking it are 27.5 times more likely than the rest of the population to die as a result of a blood clot lodging in the heart.

Despite the risks, the health department report said staff did not document checks of Tameka's vital signs each day and her unborn child's heartbeat each shift.

Just before 2 a.m. on the eighth day of Tameka's stay at the hospital, she called out to a staff member, a Cook County medical examiner's report says.

Tameka said she felt weak but needed to go to the bathroom, and the worker helped her sit up in bed, the report says. The staffer looked on, though, as Tameka held on to a wall, grew visibly weak in the legs and fell to the floor, the report says.

Hospital regulators found that the hospital failed to ensure Tamekaâs safety in the moments before staffers called a "code blue."

Williams' autopsy states that she died after a blood clot in her right leg broke loose and lodged in her heart. Cook County Medical Examiner Dr. Nancy Jones said Williams' pregnancy and obesity were contributing factors to her death.

Jones said the office typically checks for drugs that people tend to abuse. She said the examiner did not screen Williams' blood to determine whether clozapine was a factor in her death.