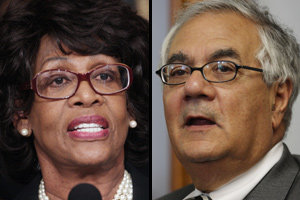 The queue of banks seeking bailout money is a long and winding one. They can't even get a "hi there" from Treasury officials, bankers complain.

But OneUnited Bank is that rare success story. Even though it was scolded by regulators in October for poor lending practices and executive perks (like a Porsche), it landed $12 million in bailout money in December.

The difference: two friends in high places. Rep. Barney Frank (D-MA), the chairman of the House Financial Services Committee, was so moved by OneUnited's plight that he tailored a provision in the $700 billion bill so that the bank would get special consideration for help. And Rep. Maxine Waters (D-CA), who also sits on that committee, could be relied on to ring up the Treasury to make sure they knew just how special OneUnited was.

Waters may have had particular reason to jump in, the Wall Street Journal reports. Her husband is a former director of the bank, and as of the lawmaker's last financial disclosure statement, released May of last year and covering 2007, her husband held between $250,000 and $500,000 in stock in the bank. It's unclear whether he still holds that stock, because Waters didn't respond to the Journal's questions. (Waters herself also once had $250,000 to $500,000 in stock in the bank but sold it in 2004.)

In a January interview with the Journal, she claimed to be ignorant that OneUnited had finally scored a Treasury investment, adding that it was "just a small" bank.

Frank has said that he paid the bank special attention because it's based in Massachusetts, is the state's only financial institution owned by African-Americans and took a big hit when the government seized control of Fannie Mae and Freddie Mac. (It held a large amount of Fannie and Freddie preferred stock.)

As Frank put it to the Journal, "I did feel that it was important to frankly try and save them since it was federal action that put them into the dumper." One could also argue it was a bad investment that put them in the dumper, but Frank and Waters are clearly inclined to give OneUnited the benefit of the doubt.

Waters isn't the only lawmaker with a financial tie to a financial institution that got a piece of the bailout. ProPublica reported in January that House Republican Whip Eric Cantor's (R-VA) wife works for a subsidiary of a bank that got bailout funds. A USA Today investigation found that two dozen members of Congress had "substantial financial ties" to bailout recipients.