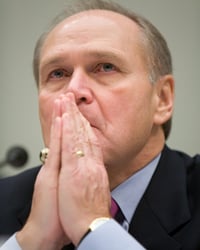 Back in March, when the Obama administration rejected the automakers' reorganization plans as unacceptable, they were given ultimatums: Chrysler had 30 days, and GM had 60. Chrysler's time is up next week, and the Wall Street Journal reports that one of two things is likely to happen.

If Chrysler can strike a deal with its lenders and merge with Fiat, then the company would file for Chapter 11 bankruptcy protection to cleanse itself of other liabilities. The government would provide financing to see the process through.

But if those deals don't come together, then it would be a less orderly form of bankruptcy: liquidation. That would be bad news for Chrysler's 66,000 U.S. employees.

An administration official disputes the idea that bankruptcy is inevitable, but that doesn't seem to jibe with recent comments by Chrysler's chief financial officer.

It's going to be a big week next week for the bailout.