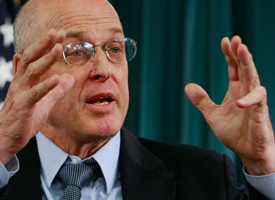 In the past two and a half months since Treasury Department Secretary Hank Paulson first proposed TARP, the massive program to buy troubled mortgage assets, Paulson has reversed course a number of times.

Testifying to Congress, Paulson initially rejected the idea of buying equity stakes in the country's banks. Then weeks later his department decided to do just that, eventually junking his original idea. There would be no new initiatives -- just the capital purchase program and expenditures to save imperiled institutions like AIG and Citigroup. Then he reversed course again, saying there might indeed be additional initiatives, and he might return to Congress to ask for the second installment of the $700 billion. More recently, the Federal Reserve announced a $200 billion program to lend to institutions holding asset-backed securities. This, in effect, addresses the original purpose of the TARP, except that instead of purchasing the assets, the Fed is accepting them as collateral for loans ($20 billion of TARP money is being used as credit protection). The program for now excludes mortgage assets, but might be widened later (PDF) to include them.

The lurching evolution of the government's response is a symptom of a lack of a coherent strategy, says Elizabeth Warren, the chair of the new congressional panel set up to oversee the bailout. In an interview with the New York Times, Warren promises to do what should have been done first: get Treasury to explain "what it's doing and what it plans to do -- and whether either of those are likely to address what's going wrong."

Those questions were never asked, Warren says, because lawmakers, like the public, were "stunned" by the sudden onset of the financial crisis. And she indicates that one of the main reasons that Treasury officials have been inconsistent in their response is that they're underplaying the root cause of the crisis. Warren, an expert on consumer bankruptcy and professor at Harvard Law School, says Treasury is overlooking the little guy:

Meetings with Treasury officials so far have made her question whether they understand that "household financial health is profoundly tied to the economic health of the nation," she said. "You cannot repair this economy if you can't repair those families, and I'm not sure the people directing the bailout see that as their job."...

"Any effective policy has to start with the households," she said. "Years of flat wages, low savings and high debt have left America's households extremely vulnerable."

Warren promises the congressional panel's first report next Wednesday, which she says will lay out "the central questions that Treasury should be addressing as it spends the taxpayers' money." She says that another report, one with recommendations for reforms to the financial regulatory structure, will be ready by Barack Obama's inauguration.

The panel is part of a trio of bodies that will have oversight over the bailout. The other two are the General Accountability Office, Congress' nonpartisan investigative arm, and a special inspector general. Warren explains that her panel (composed of three Democratic and two Republican nominees) is likely to emphasize policy guidance rather than "procedural oversight." The GAO and IG are the ones who'll be getting their hands dirty with how the bailout is actually working. The GAO's first report is due out today and is expected to be critical of the Treasuryâs failure to track how the bailout money is being spent.

The special inspector general hasn't gotten started yet, because the administration's nominee, Neil Barofsky, a veteran federal prosecutor, has yet to be confirmed in the Senate. According to Senate Banking Committee Chair Chris Dodd (D-Conn.), a Republican has blocked Barofsky's nomination on the Senate floor. TPMmuckrakerandgovernment watchdogs have been busily working at unmasking the unnamed senator.