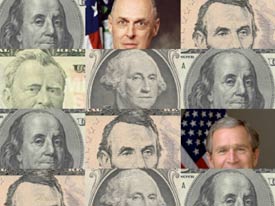 Congratulations, MidSouth Bancorp! Youâre the 200th participant in the bailout!

MidSouth, a Louisiana bank, will "win" a $20 million investment on favorable terms. So far, 205 financial institutions have gotten a piece of TARP, the $700 billion bailout bill, according to ProPublicaâs running tally. Money has been doled out across the country, from Hawaii to Maine to Puerto Rico. As always, you can see where the banks are on our map.

The biggest participant so far is Citigroup ($45 billion), the smallest Saigon National Bank, a regional bank in California ($1.2 million). The average investment is $1.2 billion, but the vast majority of banks have gotten much less â the median investment is $50 million. $246.95 billion total has been tagged for investment.

Yesterday, the Congressional panel charged with overseeing the Treasury Departmentâs program held its first regional hearing. Las Vegas residents didnât show much love for the bailout, the Los Angeles Times reports, and the chair of the panel proclaimed "there is little evidence of what effect these billions of dollars are having on us."

Only one bank headquartered in Nevada has received Treasury funds: Western Alliance. The bank, based in Las Vegas, got $140 million last month. Of course, national banks like JPMorgan Chase and Bank of America got billions.

"It is just not helping at all," Senate Majority Leader Harry Reid (D-NV) said at the hearing.