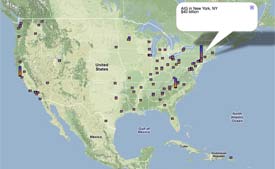 Itâs been busy few weeks for the Treasury Department. Since mid-December when we updated you last, the bailout kicked into a higher gear, doling out more than $30 billion in celebration of the season of giving (OK, investing). Added to the tally were U.S. auto companies, financial firms like American Express, CIT, and GMAC.

As of today, the Treasury has committed $278.87 billion of the TARP, the $700 billion bailout bill. As always, you can see a list of all 284 of those financial institutions in our frequently updated TARP tally, and a map of those institutions is here.

The average investment so far is $981.2 million, but given that nearly a third of the money has gone to just two institutions (AIG and Citigroup), most of the investments have been for much less. The median investment is $35.8 million.

Is all of this working? The answer from the administration continues to be a very abstract yes. About a month ago, Treasury Department official Neel Kashkari testified that job one was to prevent the financial system from collapsing, and so far so good. He acknowledged that banks receiving the money werenât doing much to lend it out but said they would eventually in time. When? He didnât know. But it will be sooner than it would have been without the TARP, he said. In a written reply to questions from the Congressional Oversight Panel last week, Kashkari said the same thing.

Meanwhile, the Treasury has almost committed the entire first installment of the bailout. Together with $20 billion set aside to back up a Federal Reserve program to juice the asset-backed securities market and $5 billion more to guard against further Citigroup losses, the Treasury has committed about $304 billion. Treasury has only been authorized to spend $350 billion, and to get the next $350 billion, it will have to ask Congress. But that will be a decision for the Obama administration.