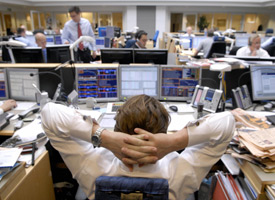 For taxpayers who feel like they are getting nothing in exchange for the bailout billions being pumped into banks, one former Swedish official has a solution: Be wise, nationalize.

Observers who can get past the shudder that the word itself often elicits point to many benefits of such a plan, which former Swedish minister of fiscal affairs Bo Lundgren outlined for the New York Times.

At the beginning of the last decade, Sweden was faced with a collapsing real estate bubble. Instead of merely extending risky loans to banks, which is the U.S. approach, in 1993 the Swedish government actually took control of problematic assets and grouped them into a "bad bank," which, in classic Orwellian fashion, they named Securum.

The bank was then kept afloat with public funds, awaiting an economic recovery to increase the value of the assets, which, according to the Times, included the Australian Embassy building in Myanmar and "a guitar that was said to have belonged to John Lennon."

By most accounts, Securum was a success. Slated to stay open for 15 years, it closed after four, and an analysis (PDF) by the Federal Reserve Bank of Cleveland found Swedish taxpayers had recovered more than half of the 24 billion kronors ($2.88 billion) in public funds pumped into the company.

Finally, the threat of government control scared many banks away from seeking government bailouts at all. Several of the largest Swedish financial institutions found ways to solve their problems without government help.

Of course, it is not clear whether the scale of the current U.S. crisis makes the Swedish model replicable.

And for those hoping a bank nationalization program would solve U.S. financial sector woes once and for all, the Swedish example is also enlightening. Late last year, Stockholm began negotiating another bank bailout.